Delivering emotional bars and infectious melodies with a distinctly southern flair, Jacksonville’s Yungeen Ace weaves a personal tale of perseverance through well-crafted rap songs. Coming through with his highly anticipated debut mixtape, Ace shares Life of Betrayal. A mature and fully-formed effort from the 20-year-old rapper, Life of Betrayal finds the Cinematic Music Group signee navigating his place in his community and in the world, striking back at haters, mourning lost friends, and attempting to control his emotions. Premiered by Billboard along with an interview with the rising artist, Life of Betrayal arrives hot on the heels of several popular music videos, including “Jungle,” a poignant banger with an appearance from JayDaYoungan, which garnered over 2.69 million views on YouTube, “Fuck That,” (4.5 million views), “All In” (4.7 million views), and “Betrayed” (2.1 million views). Featuring an appearance from NBA YoungBoy and hosted by DJ Shab, Life of Betrayal releases via Cinematic Music Group.

Building up a profile with his crafty songwriting and expressive vocals, Yungeen Ace won the respect of many of his peers, ranging from superstar NBA YoungBoy to deep south veteran Mista Cain. In 2018, Yungeen Ace started to build a sizable fanbase, earning millions of views on his music videos. In June, Yungeen Ace’s meteoric rise took a dark turn when he and three friends, including his brother, were attacked in a drive-by shooting. Though he attempted to shield his brother from the hail of bullets by using his own body, getting shot 8 times, as he told his 349k Instagram followers, Yungeen Ace was the only survivor of the shooting. After spending weeks recuperating in the hospital, Yungeen Ace has a new lease on life, and he intends to turn the tragedy of his brother’s and his friends’ loss into artistic triumph. Last week, Yungeen Ace shared the FADER-premiered video for “Demons,” which earned over 488,000 views.

Listen to Life of Betrayal: https://soundcloud.com/yungeenace/sets/life-of-betrayal/

Check out the Billboard premiere: https://www.billboard.com/articles/columns/hip-hop/8468276/yungeen-ace-life-of-betrayal-mixtape-interview 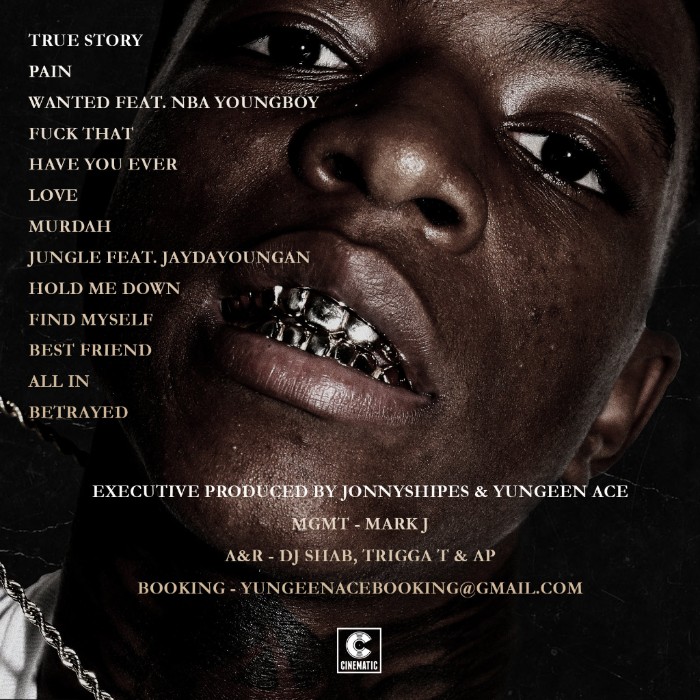 Yungeen Ace has built his massive following by standing alone. At 20, the artist born Keyanta Bullard describes his city of Jacksonville as “a jungle.” Originally a Chicagoan, he moved to Duval County, Florida as a child with no friends. Despite 11 brothers, Ace learned fast that if he wanted to survive, he could only rely on himself. “It’s hard out here. Everything we do, we gotta fight for it. We’ve got to go above and beyond just to make it. The surroundings are crazy. It’s a creep city. Nobody is for you out here, so you have to be really for yourself.” In June of this year, Ace was the lone survivor when a car he was riding in was ambushed by a drive-by shooting on Town Center Parkway. Three friends died. Just freed after a bid, the moment was a painful and chilling reminder of the violence epidemic for Ace. It was a dark spot in an otherwise upbeat time. The rapper recently signed with Cinematic Music Group, a label responsible for propelling key new musical voices into the mainstream. With his debut mixtape, Life of Betrayal, arriving August 3rd, Ace is next.