Pioneering an entrancingly melodic strain of hip-hop, Huntington Beach, CA artist Yung Pinch is one of the fastest-growing acts on the West Coast. Shooting in luxurious black-and-white, Pinch takes a break from his successful tour to film a behind-the-scenes music video for “1997.” Smoking up in his tour bus with his crew, “1997” finds relaxing between shows on his  All 4 The Love Tour, which is now entering its home stretch. Released as part of his #4EVERFRIDAY series of weekly releases, the Charlie Handsome-produced single has racked up over 1.2 million streams on all platforms since its release in February. The video shows the charisma and magnetism that won Pinch a cult following and earned him a nomination for the XXL Freshman 10th Spot.

The video for “1997” follows up the infectious “Tony Montana” and the hazy “Cloud 9,” new bangers released over the past two weeks. The “Bluntington Beach” native keeps his fans satisfied with a weekly stream of catchy releases, including “Sail Away,” the wavy HYPEBEAST–premiered video, “Smoke & Drive,” which samples Weezer’s “Island In The Sun” and features appearances from fellow Cali hitmakers blackbear and P-Lo, and the YG-featuring “Big Checks.” Accumulating millions of streams since the drop of his 2017 #FREEYUNGPINCH EP, including over 10 million Spotify plays on “When I Was Yung,” a mainstay on the service’s Clout Culture playlist, Yung Pinch is building an unstoppable momentum as he hurdles towards his next project, sure to be his biggest yet. On Valentine’s Day, Pinch shared 4EVERHEARTBROKE3, a four-track sampler of his signature style. Catch Yung Pinch on his headlining All 4 The Love Tour, while tickets are still available. The tour already sold out 13 dates, including in far-from-home locales such as Dallas, Atlanta, Birmingham, and Toronto. Last week, Yung Pinch lit up SXSW, performing at showcases for SoundCloud, Zaytoven, and others.

Vote for Pinch at http://freshmanxxlmag.com/10th-spot/

Buy tickets to Yung Pinch’s ALL 4 THE LOVE TOUR: yungpinch.com/pages/tour 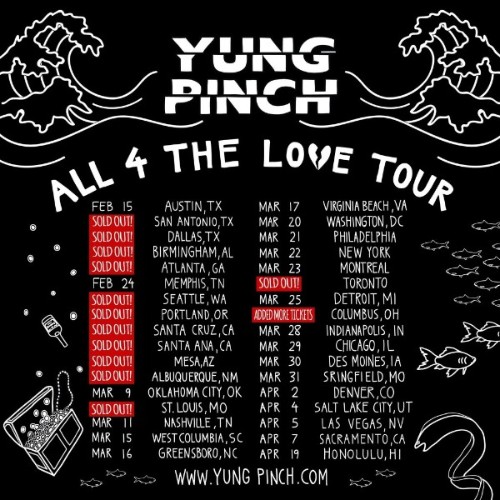 “When I Was Yung”: https://www.youtube.com/watch?v=QCVPxZUrxC4