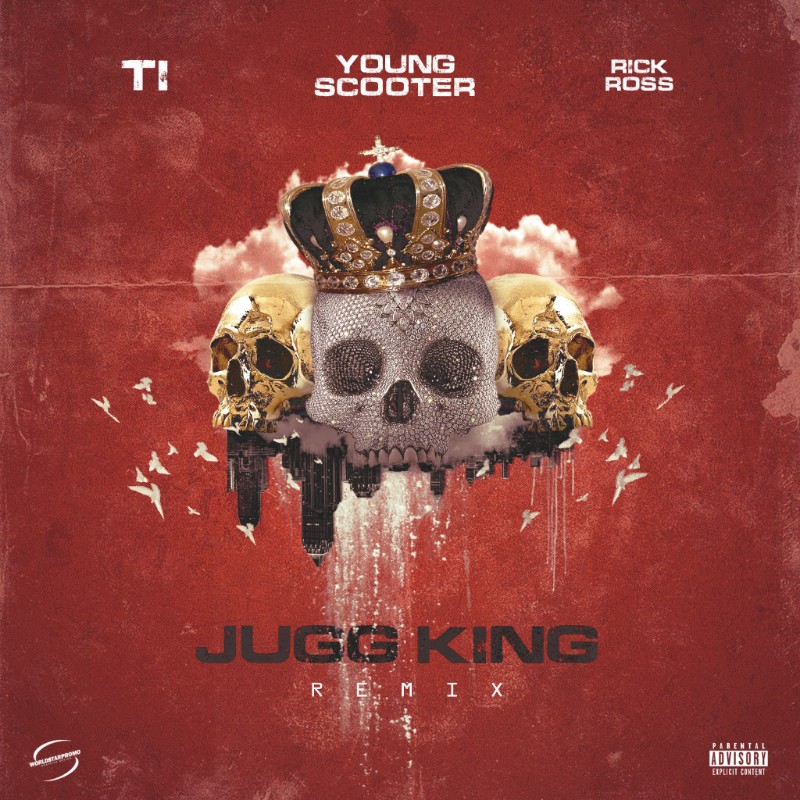 A well-connected ambassador for ATL trap music, Black Migo Gang chieftain Young Scooter specializes in hard-hitting hustler’s anthems. A slow-burning street hit with over 5 million plays on Spotify and 7.5 million views on YouTube, Scooter’s “Jugg King” is a cocky and infectious banger, built around an epic, see-sawing chord progression and a dramatic piano loop, which Scooter matches with a gleeful sing-song flow. Breathing new life into the 2017 hit, Scooter recruits Rick Ross and T.I. for the song’s remix. The Bawse kicks off the song with his typical bravado (“Yayo when I’m on the block/Yayo in the coffee pot/Yayo in the rental car/I’m sold out by 10 o’ clock”), before the King comes through with an erudite burst of double-time (“Fuck n*gga do what they can/Real n*gga do what they want/I fuck with Young Scooter and the Black Migo Gang cause I know they gon’ keep it A-1”), and Scooter takes the anchor leg. Premiered by Billboard, the “Jugg King” remix follows Trippple Cross, Scooter’s most recent album, released in March by Black Migo Gang and EMPIRE.

With multiple guest appearances from ATL innovators Young Thug and Future, whose hyper-melodic flights of fancy mesh perfectly with Scooter’s earth-shaking baritone, Trippple Cross is packed with braggadocios boasts, slick punchlines, and heartfelt accounts of Scooter’s legal tribulations. Though the record’s subject matter can grow heavy, Scooter never loses his cool, creating hooks with a wry grin and rhythmic invention. Featuring appearances from Young Thug, Future, Youngboy Never Broke Again, Casino, and VL Deck,Trippple Cross shows the skills that earned Scooter the respect of the biggest rappers in the game and demonstrates that he deserves to be mentioned among the best in his city. Most recently, Scooter appeared as the only guest on BEASTMODE 2, the recent collaboration between Future and Zaytoven, featuring on the track “DOH DOH.”

Check out the Billboard premiere: https://www.billboard.com/articles/columns/hip-hop/8464826/young-scooter-jugg-king-remix-ti-rick-ross