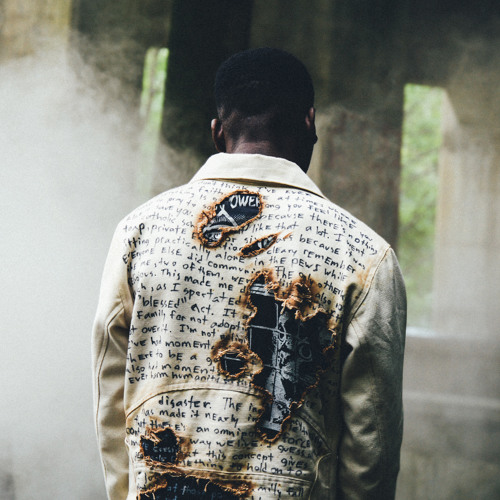 With rugged vocals that have been compared to Sticky Fingaz, Nine, and DMX, 19-year-old Ottawa rapper VNCHY is gearing up for his debut Neverland EP in July. On the forthcoming single “Broke Dreams,” the Congo-born rapper reflects on being the middle child, raised as the son of a preacher while his mother held the family together “like brackets within a function.” In addition to the influence of his family and how he was raised, VNCHY’s infatuation with the entertainer’s lifestyle stems from an unyielding confidence in his skills as an emcee. VNCHY raps: “Overcome my age, it’s more than just a phase momma/ I’m not deranged, I was born for that stage momma.”

During the first performance of an acoustic, pen-tapping version of the single at The University of Ottawa, the rapper used pencils and a school desk to recreate the instrumental as he passionately recited each verse, often getting applause throughout the performance. With guitarist and singer Horus on the choruses, the two showcase their musical chemistry as well as the song’s lyrical vigor before their final standing ovation. When asked about what “Broke Dreams” meant to him, VNCHY stated that the single, “is that point of no return…it only made sense that this was what I was willing to put my life on the line for… The friends lost, struggle to attain support, social and economical standings, though very negative in their effects, it was all crucial for progression-I had to break everything before rebuilding. I am committed to the pain.”

With the help of producer Prezident Jeff, who’s also produced for Little Simz and Kevin Gates, “Broke Dreams” is the second single from VNCHY’s Neverland EP. The single follows VNCHY’s last release, “19+,” which he released earlier this month and landed the young rapper a spot in Karen Civil‘s Civil Selects feature spotlighting new artists. In their premiere of “19+”, EARMILK praised VNCHY’s “swirling, haunting vocals” and “fantastic lyrical content and flow.” VNCHY has opened for the likes of Big K.R.I.T. alongside Two-9 and has performed with Post Malone on his White Iverson Tour. Now, at the ripe age of 19, he’s ready to take his distinct sound to the spotlight. Stay tuned for his Neverland EP, releasing in July.