Honored as Part of Houston’s Harvey Heroes Day, the Rapper & Humanitarian Shares “What About Us” a Touching, Complex-Premiered Single About His City’s Continuing Recovery

Tirelessly standing up for his city, Houston’s King Truth (aka Trae Tha Truth) is a respected rapper and a model citizen–an ideal ambassador for the diverse and musical city, and potentially first rapper to have two days in his honor in Houston. Returning to rap after putting his career on hold to raise money and provide aid for victims of August 2017’s Hurricane Harvey, Trae announces Home Town Hero, his 10th solo studio album, and his first under the new moniker King Truth. With production from Watson The Great, Moxiii, Ayo & Keys, and others, Home Town Hero weaves a rich Southern rap tapestry as King Truth expounds upon his city’s struggles as well as a refined version of the street-savvy, tough-talking, smooth hip-hop on which he made his name. Featuring appearances from Young Thug, T.I., Boosie Badazz, Mozzy, Money Man, and more, Home Town Hero releases on March 16th.

Widely respected for his charity efforts and his annual Trae Day initiative, King Truth received the key to the city in Summer 2017 from Houston Mayor Sylvester Turner. When Hurricane Harvey hit Houston in August, the veteran rapper leapt into action, raising money and saving people affected by the flood. During the immediate aftermath of the disaster, King Truth provided aid to Houston’s citizens, patrolling a boat through Houston, Port Arthur, and surrounding areas to rescue those trapped by flooding (including San Antonio Spurs forward Jonathon Simmons), providing Texas inmates with food and supplies, and launching a GoFundMe through his Angels By Nature nonprofit organization. King Truth’s GoFundMe effort to help underserved families in Houston has already raised over $211,000, with celebrities such as Snoop Dogg, Mike Epps, and T.I. donating money to the campaign. For his efforts in support of the hurricane recovery, King Truth recently received a commendation from the City of Houston, who honored the rapper by listing him as one of the heroes to be honored by “Houston’s Harvey Heroes” Day, occurring each year on February 27th.

To accompany the announcement of Home Town Hero, King Truth shares “What About Us,” his latest single. Rhyming rapidfire with his ultra-smooth basso over deep bass, disorienting strings, and angelic vocal samples, King Truth recounts his experiences of the hurricane’s immediate aftermath, channeling the feelings of his Houston community: “The body count was risin’, family members missin’, others tryna survive/They don’t know their condition but yet they hope they alive.” Premiered by Complex, “What About Us” is a poignant recollection of the recent tragedy, a tribute to the strength of a community, and a reminder that though Houston’s struggles have fallen out of the news cycle, thousands of people are still without homes. Meanwhile, people like King Truth continue to quietly help the community with donations and relief efforts.

Listen to “What About Us”: https://soundcloud.com/traethatruth/what-about-us/

Check out the Complex premiere: http://www.complex.com/music/2018/03/trae-tha-truth-what-about-us 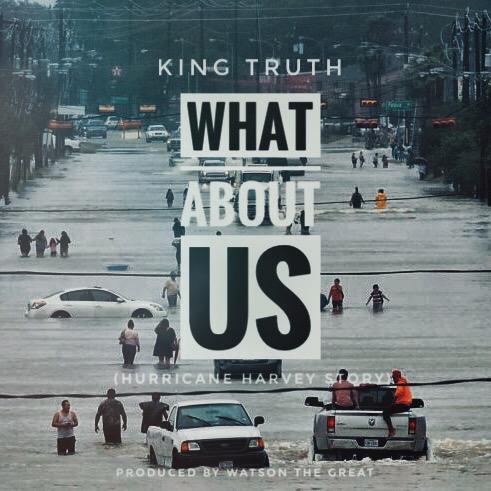 “Tryin To Figure It Out (Houston Hurricane Harvey Dedication)”: http://www.youtube.com/watch?v=VZ34YtSZhE0