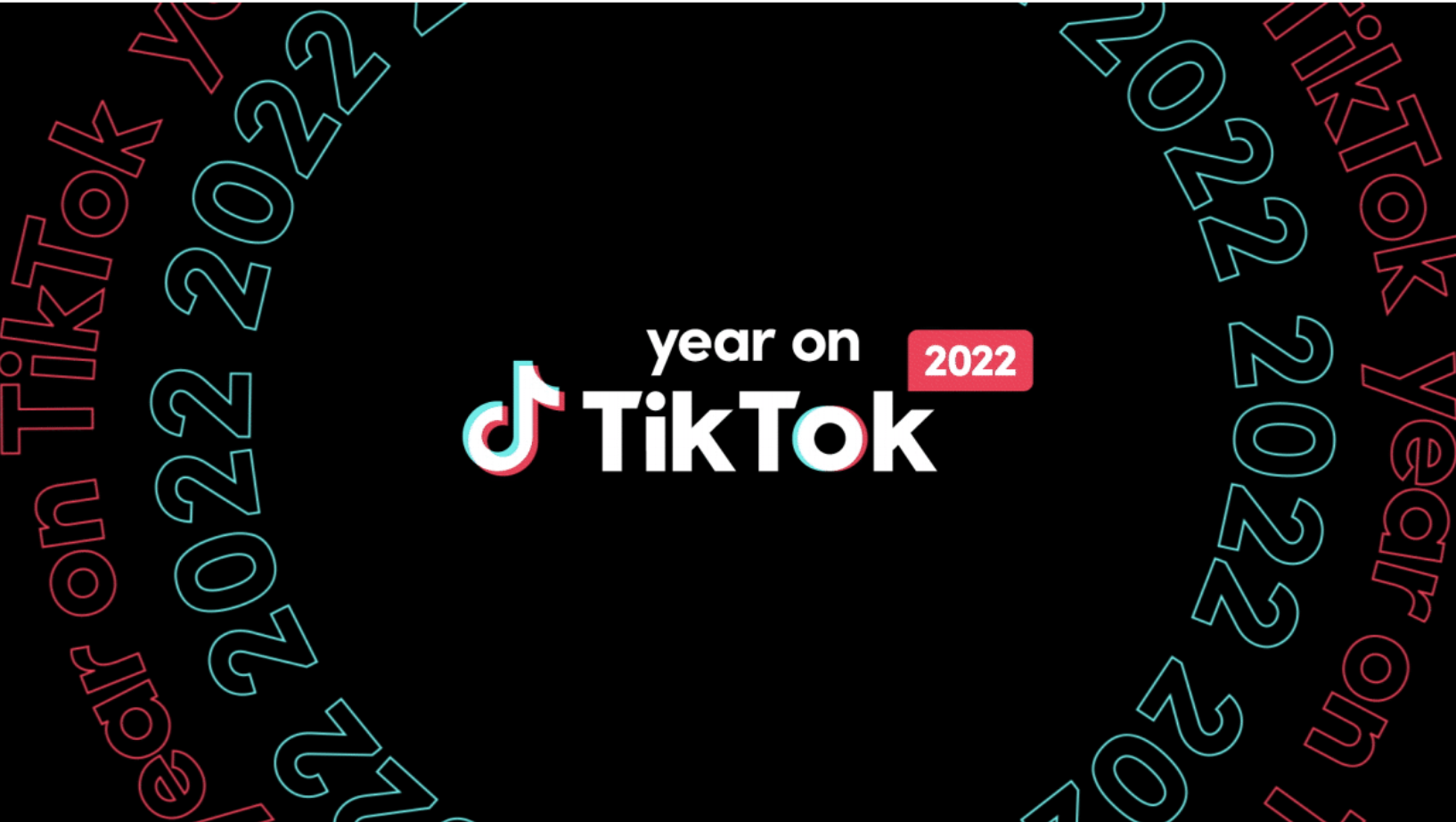 TikTok is the driving force behind the world’s biggest cultural trends and movements, and music is at the heart of what makes TikTok special. As TikTok celebrates its Year On TikTok 2022, the game-changing platform shares an extension of the annual report, exploring the Year In Music on TikTok 2022. Take a peek behind the curtain at the music that resonated with the TikTok community this year and how it impacted the charts and culture at large.

From breaking countless hit records and driving chart success to opening the door to emerging artists, TikTok continues to empower and support the next generation of superstar artists while also breathing life into catalog classics. Artists use TikTok to build engagement, connect with their fans and find new ones, laying the foundations for future careers and creative success.

2022 saw a major rise in popularity for music created specifically for the platform, from sped-up remixes to open verse challenges to song-ified dialogue. TikTok didn’t just amplify hits in 2022, it made them.

As the TikTok community continues to grow and artists and creators find their fans, more opportunities emerge for every part of the music business. Whether independent or major-signed, creating, performing or simply experimenting, TikTok is driving success and real-world impact for artists, both artistically and commercially in every market.

​​Paul Hourican, Global Head of Music Operations:
“This year, we’ve seen music from every genre and every market take off globally on TikTok.  Swedish rapper Yung Lean has our most popular song of the year, closely followed by the talented Nicky Youre & dazy. Kim Loaiza and Bad Bunny brought Latin music to the world and no one could have predicted the global rap phenomenon that was ‘Jiggle Jiggle’ by Duke & Jones and Louis Theroux. Our community embraces and engages with music like no other, putting their own spin on sounds and breathing new life into old hits. These dedicated music fans, the artists and music creators and the sheer breadth and diversity of music is what we love about TikTok. I can’t wait to see what’s unearthed in 2023.”

Ole Obermann, Global Head of Music:
“Reflecting on 2022, it’s clear that artist success travels to our platforms, with 13 out of 14 Billboard Hot 100 number ones supported by viral trends on TikTok. Our platform continues to unlock real-world opportunities for artists and labels, with a brilliantly engaged community who love to build connections with artists and their music, and the impact of that is undeniable. Our teams are working globally with artists, managers and labels to unleash the promotional and marketing power of TikTok – helping talent to secure record deals, brand collaborations, chart success, or be re-discovered decades later. A huge thanks to all our partners around the world for helping make TikTok for making TikTok what it is and here’s to 2023.”

Celebrating the artists, music creators, sounds, and songs on TikTok that made 2022 truly #ForYou.

Year on TikTok 2022 is based on internal research and trends analysis conducted from January to October 2022. 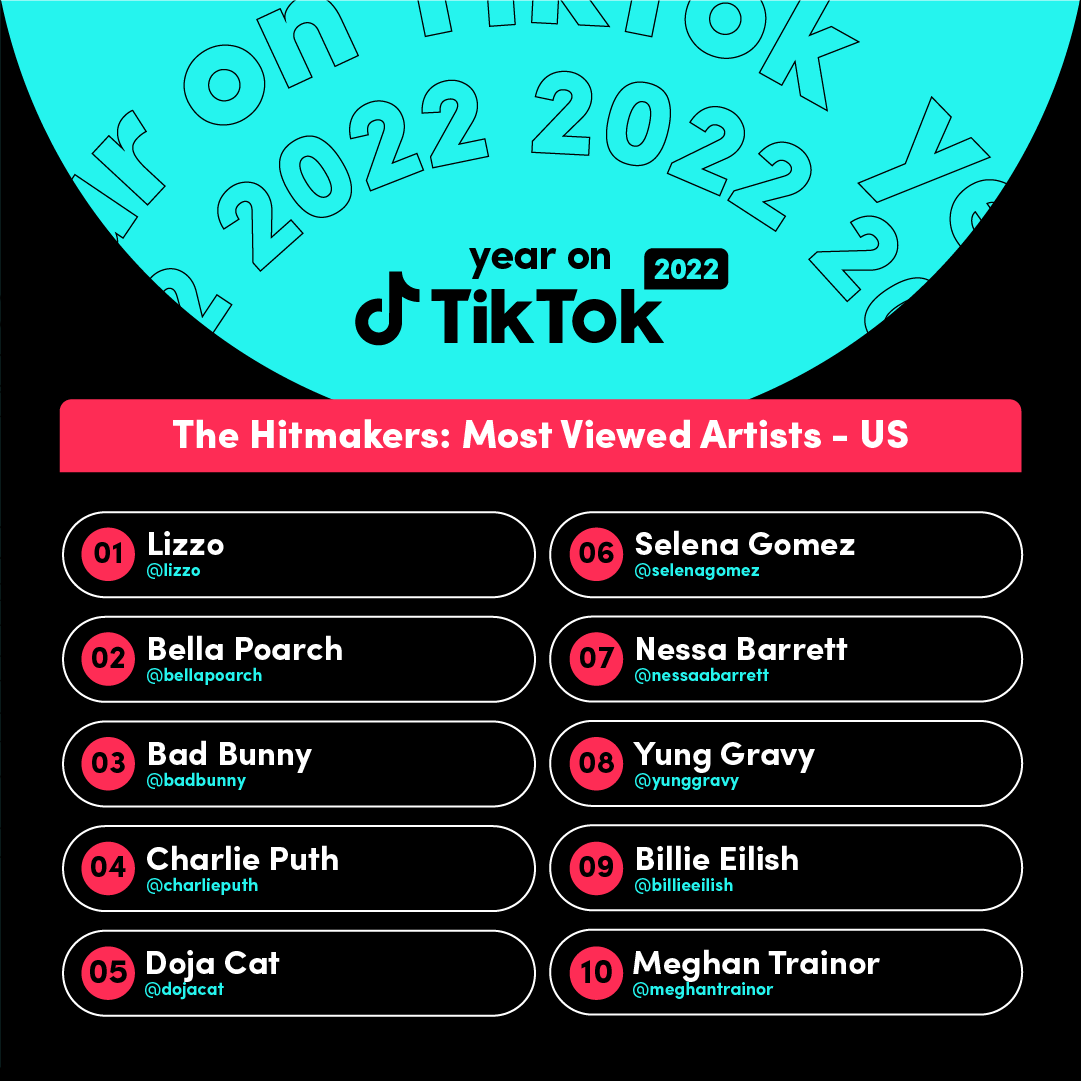 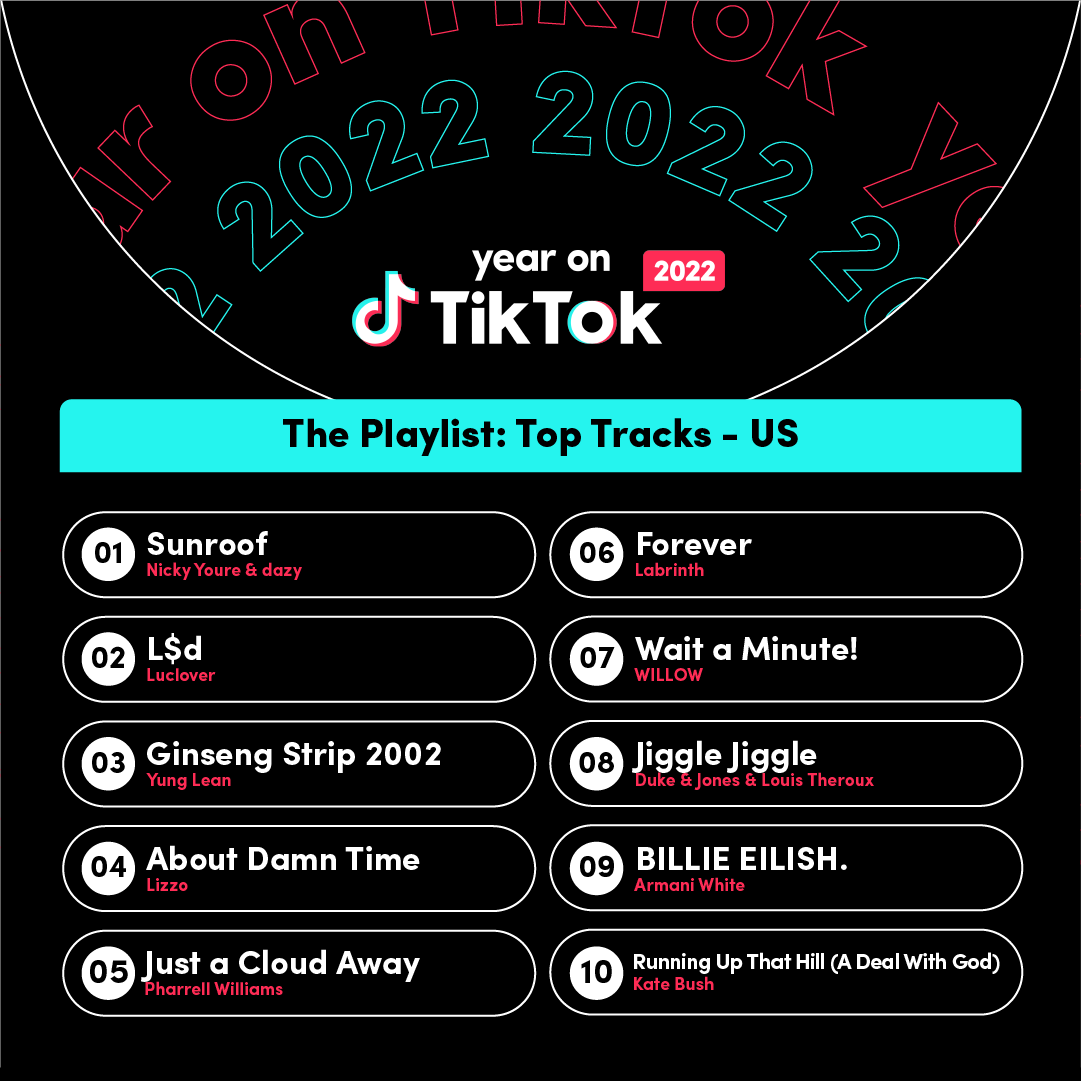 The Hitmakers – Most Viewed Artists (US)

The Risers – Artists with Most New Followers (US) 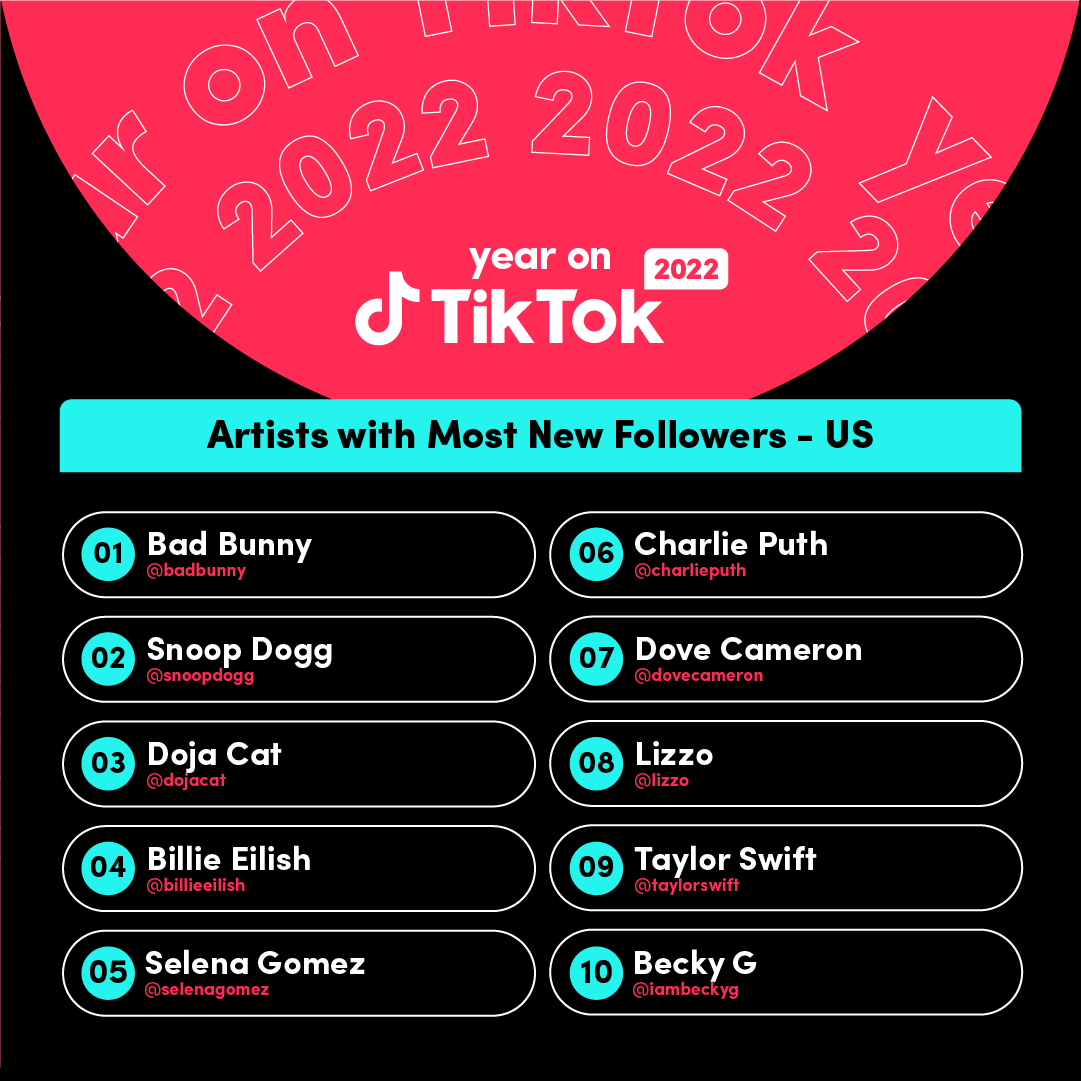 TikTok remains the top destination for music discovery for fans of all genres. Creators on the app fell in love with new favorites like Ice Spice, JVKE, Latto and more, pushing their songs off the platform and onto the charts! The incredible momentum driven by fans on TikTok even reached the Grammy Awards, with trending tracks from Muni Long, Steve Lacy, Omar Apollo, and GloRilla receiving Grammy nominations. TikTok’s emerging artists for 2022 are a diverse and accomplished group that will make meaningful music for a long time to come. 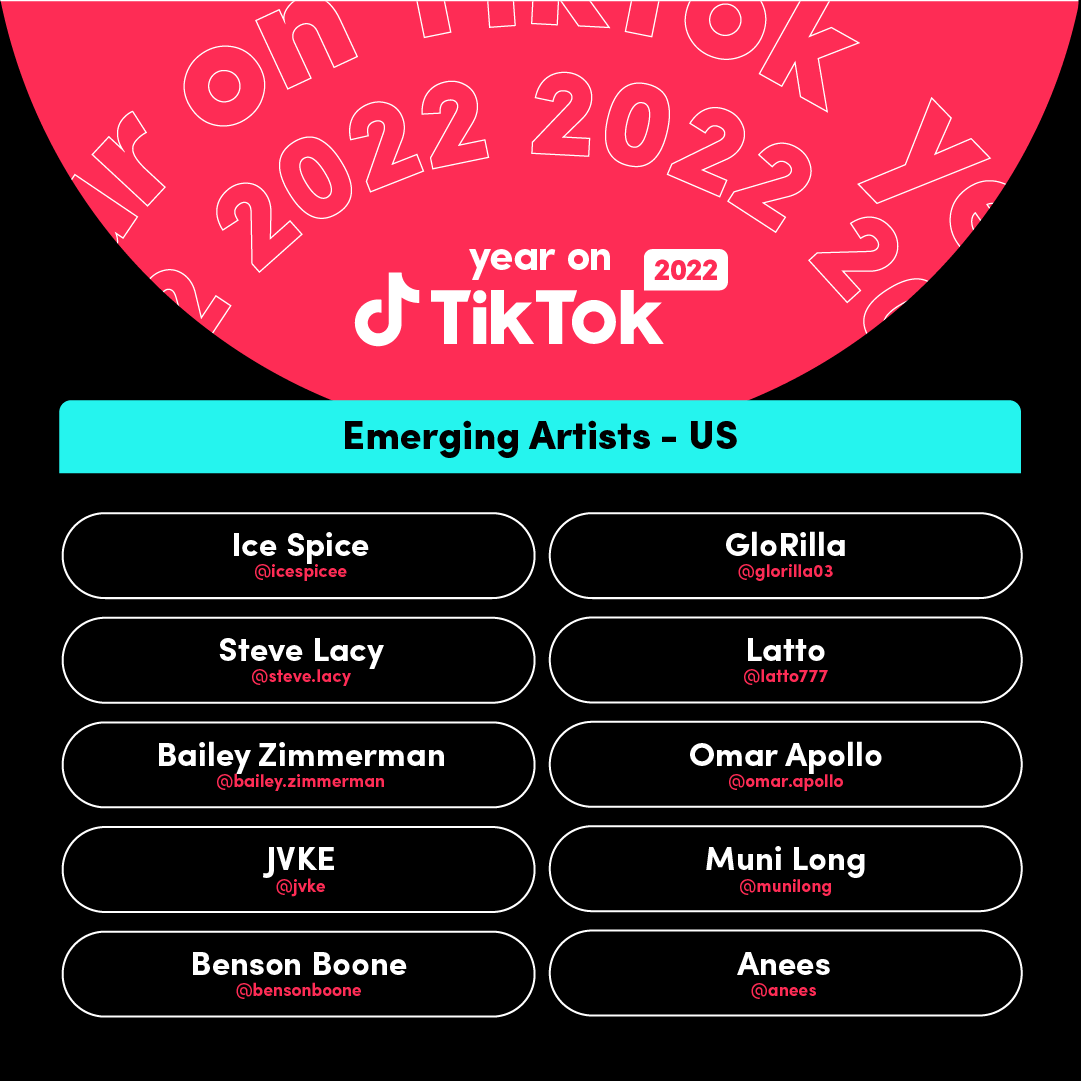 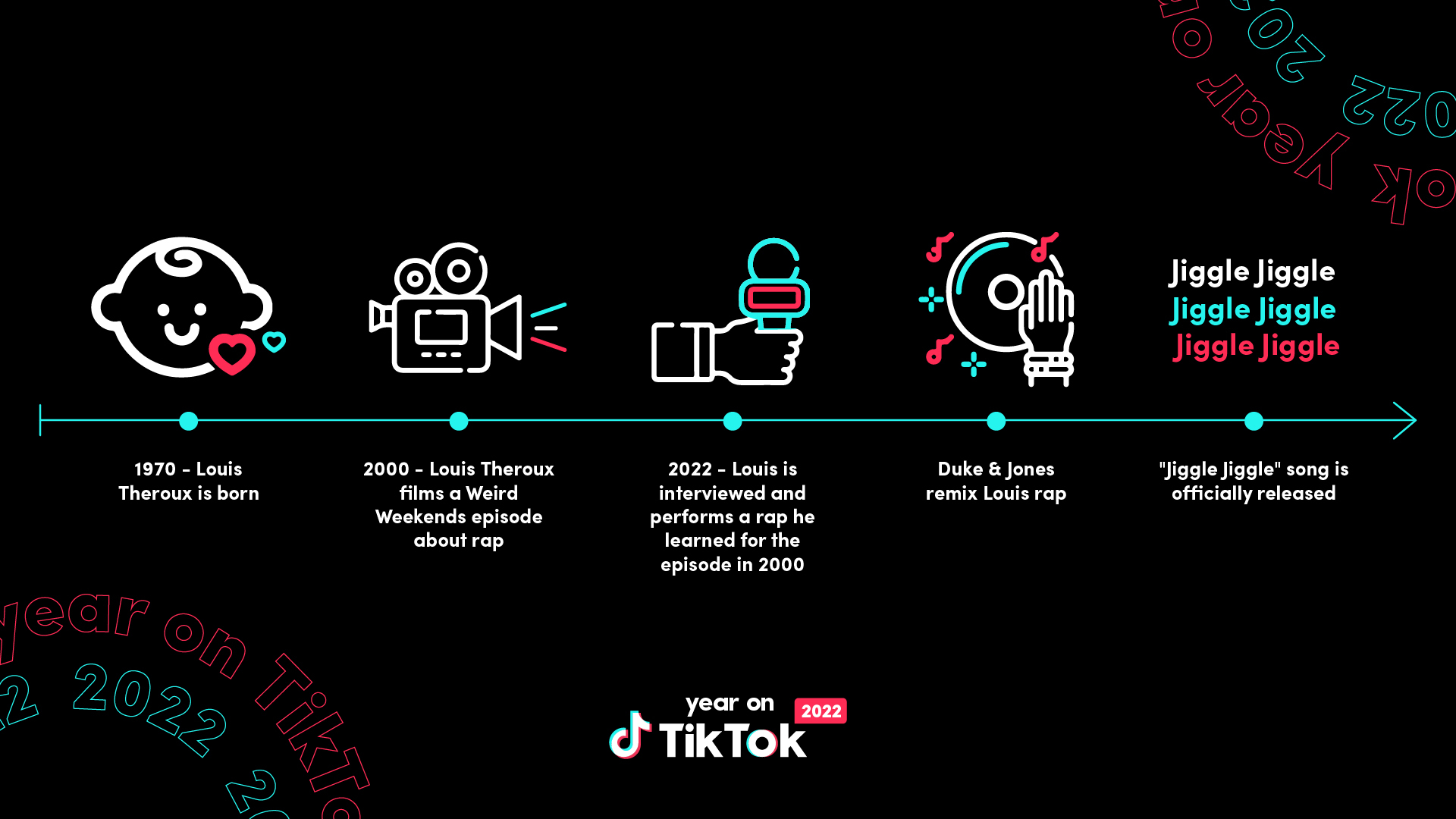 The Global Hitmakers – Most Viewed Artists

The Global Risers – Artists with Most New Followers 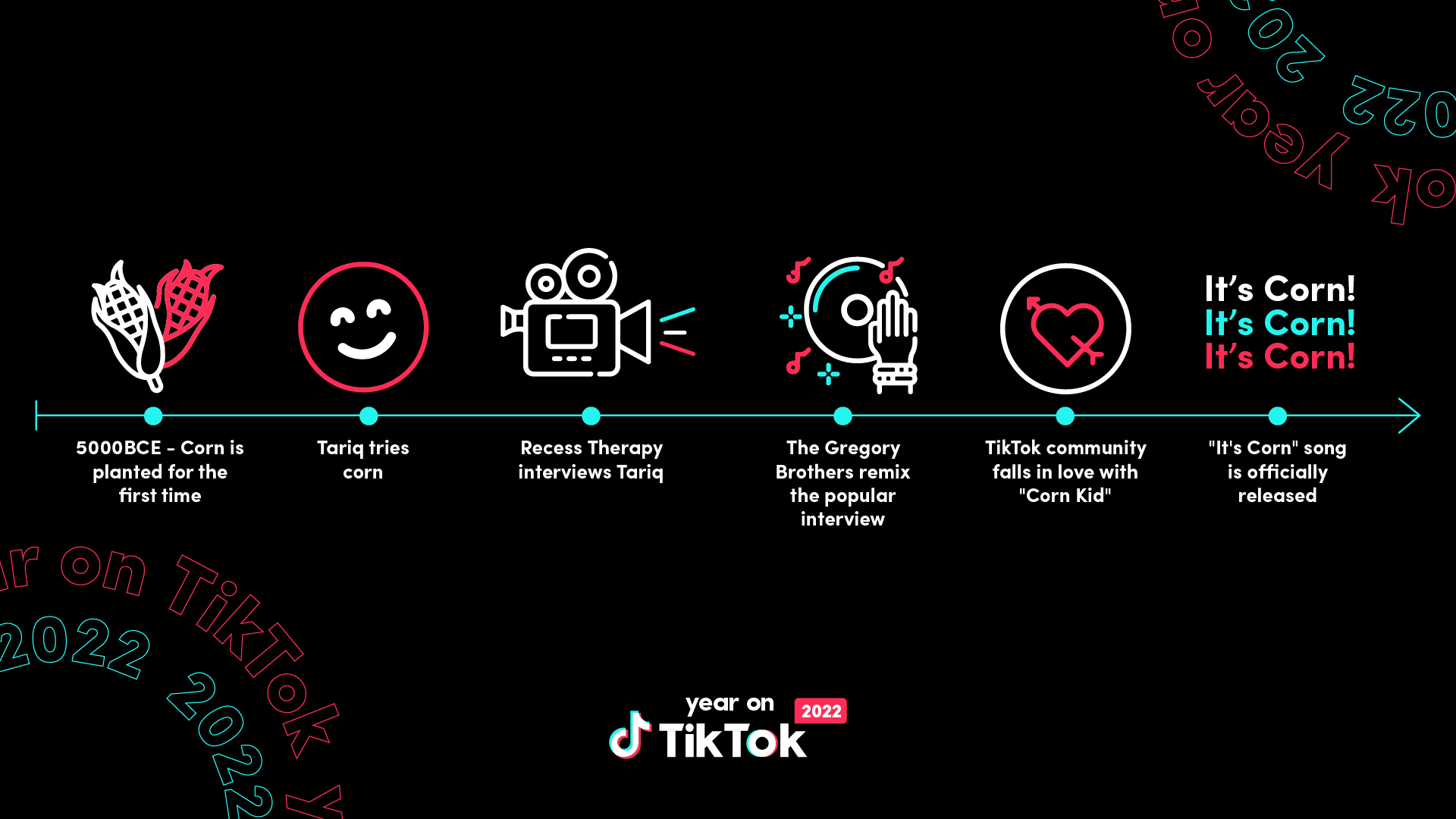