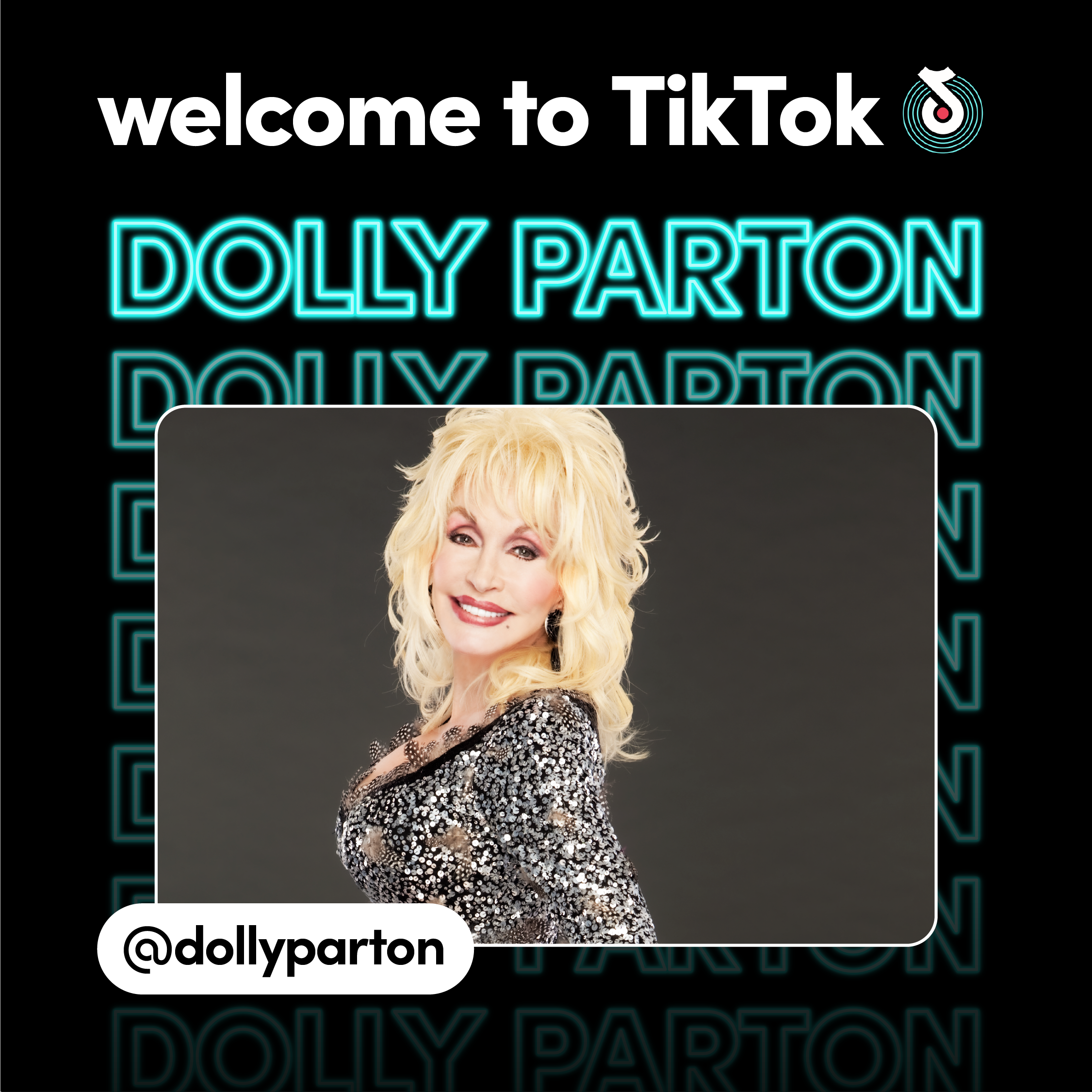 For decades, Dolly Parton has brought warmth and joy into our lives, uniting families and communities with her ebullient personality and timeless art. Just in time for the holidays, Dolly brings her singular presence to TikTok, and in true Dolly fashion, she makes a magically grand entrance with her beloved personality, unparalleled wit and legendary moments. With over 5 billion video views on the hashtag #Dolly, the massive community of Dolly fans on TikTok have been eagerly awaiting her arrival on the platform, and TikTok is thrilled to welcome her.

Filled to the brim with Southern hospitality, Dolly would never presume to join a party without bringing a gift. To celebrate the holiday season and her arrival on TikTok, Dolly has teamed up with SoundOn, TikTok’s music marketing and distribution platform, to officially release “Berry Pie”–available exclusively on TikTok for the first time for users to include in their creations. A sugary, down-home ditty that draws from traditional bluegrass styles, “Berry Pie” is the ideal soundtrack for holiday baking adventures–successes or blunders! Whether you’re a professional patissier or attempting your first tart, “Berry Pie” is the sound For You.

​​TikTok’s community embraced the legendary superstar and her peerless catalog even before her personal presence on the platform. #DollyTok is a subcommunity whose daily postings celebrate the icon’s record-breaking music, award-winning movies, and her larger than life personality. Hashtags #Dolly, #DollyParton, and #Dollytok have 6.4 billion video views combined and counting. Creators turn to Dolly’s smash hit songs, including “9 to 5” (15K video creations) when they want to pour a cup of ambition, “Jolene” (28K video creations), and “Islands In The Stream” (over 20K video creations), her chart-topping duet with the late, great Kenny Rogers.

Dolly’s launch on TikTok follows her recent induction into the Rock and Roll Hall of Fame, along with the release of her Greatest Hits album, Diamonds & Rhinestones: The Greatest Hits Collection. Her NBC Special, Dolly Parton’s Mountain Magic Christmas, which aired Thursday, December 1st and garnered monumental ratings, will repeat December 21st and is streaming now on Peacock. The southern girl who made the world into her stage, Dolly arrives on TikTok to share her one-of-a-kind sparkle and “Dollyisms,” straight from the heart.

Join Dolly on TikTok at @DollyParton and don’t forget to tag her in all of your baking videos.

Dolly Parton is the most honored and revered female country singer-songwriter of all time. Achieving 25 RIAA-certified gold, platinum, and multi-platinum awards, she has had 26 songs reach #1 on the Billboard country charts, a record for a female artist. In November 2022, Parton was inducted into The Rock and Roll Hall of Fame.  Recently, Parton reached #1 on the Billboard Christian Airplay Chart for the first time for her duet with Grammy award-winning Zach Williams of “There Was Jesus,” for which they won a Grammy that year, making that her 11th Grammy win.   She received her first Dove Award for short form video for her collaboration with for King & Country on the song “God Only Knows.” Parton is the first artist to have topped the Billboard’s Adult Contemporary, Christian AC Songs, Hot Country Songs, Christian Airplay, Country Airplay and Dance/Mix Show Airplay radio charts. Parton recently became the first country artist honored as Grammy MusiCares Person of the Year given out by NARAS. She has 47 career Top 10 country albums, a record for any artist, and 110 career-charted singles over the past 50+ years.

In 2014 the RIAA recognized her impact on recorded music with a plaque commemorating more than 100 million units sold worldwide. Her 2016 #1 album, “Pure & Simple,” which topped the Billboard Top Country Albums and Americana/Folk Albums charts and debuted at No. 1 in the U.S., Canada, U.K. and Australia, added to that massive tally. She has garnered eleven Grammy Awards and 51 nominations, including the Lifetime Achievement Award and a 2020 win with for KING & COUNTRY for their collaboration on “God Only Knows”; 10 Country Music Association Awards, including Entertainer of the Year; five Academy of Country Music Awards, also including a nod for Entertainer of the Year; four People’s Choice Awards; and three American Music Awards. In 1999, Parton was inducted as a member of the coveted Country Music Hall of Fame.

In 2020, she released the Christmas album “A Holly Dolly Christmas” which went #1 on the Billboard Country and Holiday charts, as well released the bestselling coffee table book “Songteller: My Life in Lyrics.”  In 2021, she won an Emmy Award for Outstanding Television Movie for the film “Dolly Parton’s Christmas on the Square” and this December 2022, she will be releasing on NBC an all-new original holiday movie called “Dolly Parton’s Mountain Magic Christmas” which she is starring in as well as producing.

To date, Parton has donated over 193 million books to children around the world with her Imagination Library. Her children’s book, Coat of Many Colors, was dedicated to the Library of Congress to honor the Imagination Library’s 100 millionth book donation. In March of 2022, Parton released the book Run Rose Run which she co-authored with James Patterson which sat at # 1 on the New York Times Bestseller’s List for 5 weeks, a record for this decade.  She also released an accompanying album of the same name with original songs inspired by the book which reached #1 on three charts simultaneously — Country, Americana/Folk and Bluegrass Albums.  From her “Coat of Many Colors” while working “9 to 5,” no dream is too big and no mountain too high for the country girl who turned the world into her stage.