After building her notoriety through fierce music and raucous performances, Toronto’s Tasha the Amazon has turned her energy towards breaking down barriers, both musical and personal. The culmination is Black Moon, Tasha’s expansive new album, her first full-length project since Die Every Day, which went on to earn a coveted JUNO-Award Nomination for Rap Recording of the Year and a Much Music Video Award for Best Hip Hop Video (for “Picasso Leaning“).

Branching out from her fiery and confrontational brand of warehouse rap, the Exclaim!-premiered Black Moon finds Tasha looking inward, shedding insecurities, ignoring expectations, and embracing her sonic evolution. Created and conceptualized by Bass & Bakery (a duo comprised of Tasha and her production partner, Danny Thrax), the nine-track project reveals Tasha at her purest and wildest — emerging from a turbulent period with a newly discovered supernatural confidence and an improved understanding of herself as an artist.

“The last few years of my life have been a wild ride,” says Tasha the Amazon. “From super highs, like touring across eight countries and meeting fans from all around the world, to super lows, like parting ways with friends that were like family to me and going through an illness and major surgery that kept me from performing — it all felt like big life changes and after everything, I felt like a different person from who I was before. Nothing I was working on sounded or felt right to me.”

Tasha continues: “Then one night, in the middle of winter, I was standing alone outside in the freezing cold during a full lunar eclipse, just looking up at this huge strange ball in the sky — it was completely dark, and felt otherworldly. I was totally taken by the energy of that moment. It was just me and a dark moon. It felt like someone hit the reset button on everything in my life. I realized I wanted to make an album that captures the magic I felt that night.”

“Black Moon is about purging old feelings, old energies, and old relationships that don’t serve me anymore. It’s about embracing endings and being excited for new beginnings,” Tasha says. “This meant letting myself go to places I hadn’t gone before in my music — vulnerable places, sad places, fuck-it-i’m-just-happy kinds of places. Not being afraid to be human and fully 3D. Black Moon is that energy when you know the past is gone and you have no idea what’s next, but whatever it will be, you know it’s not going to be boring, and it’s going to be real. It’s endless possibilities.”

“People are drawn to Tasha because they see her infinite energy, and the fact that she’s unapologetically herself,” says Danny Thrax, Tasha’s longtime producer and co-partner of Bass & Bakery. “But I’ve known Tasha for real, and she’s more than that — a complex human who thinks and feels deeply. We decided this new album should make room for Tasha’s full personality and big imagination. The production pushes the edges of the genre, from dreamy to dark to deep space. Each track on Black Moon captures a magical feeling, much like our surreal nights on tour, or even the power Tasha exudes as a Black female artist. I think it’s a power that we all only feel when we discover our true selves.”

Black Moon gives a home to several critically-acclaimed singles that dropped throughout 2019. Premiered by HipHopDX, the introspective “Can’t Remember” is plagued by self-doubt, as the artist of German-Jamaican descent struggles to reconcile her stage persona with her everyday personality. The brilliant kiss-off track “That Ain’t You,“ which released with an afro-futuristic, NYLON-premiered video, finds Tasha chafing against the boxes to which people attempt to constrict her. Brighter than her usual style, the melodic “Not The Same,” and its pastoral video, concerns keeping true friends jettisoning fakes. With a video that dropped last week that paid tribute to The Prodigy and late frontman Keith Flint, “Helluva Ride” returns to Tasha’s warehouse roots, channeling the righteous fury of her live performances into an exhilarating three minutes. With new highlights like the cavernous “Glory Hallelujah” and the immediate “Live Forever,” Black Moon is available to stream and purchase on all platforms.

Check out the Exclaim! premiere: https://exclaim.ca/music/article/stream_tasha_the_amazons_new_album_black_moon 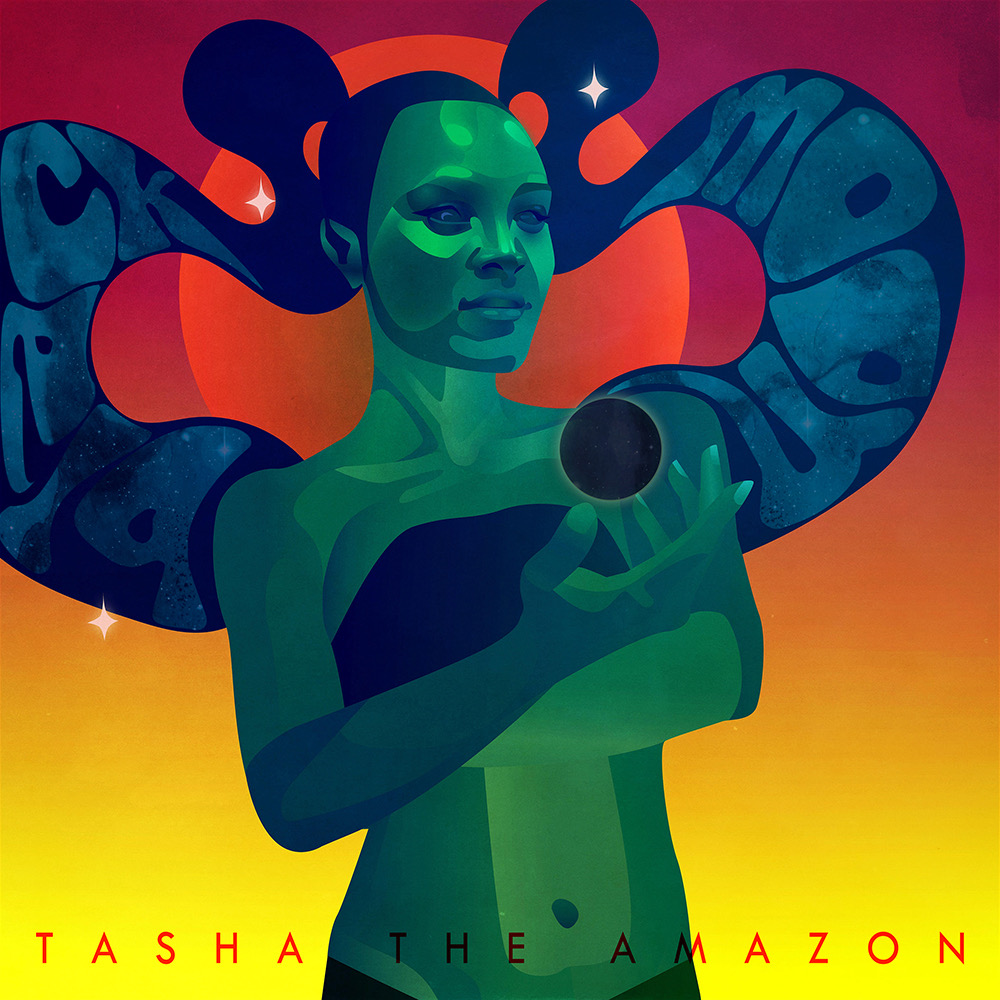 A bomb in a china shop. Toronto’s Tasha the Amazon is an artist, producer, and bad gyal. Notorious for rude stage antics and warehouse parties shut down by police raids, her unconventional lyrics deal as much with partying and hood mischief as they do with anarchy and civil disobedience.