Six years ago, Tennessee emcees Don Trip and Starlito joined together for Step Brothers, an eccentric, perfectly executed rappity-rap album inspired by the 2008 cult Will Ferrell comedy of the same name. Like the movie, the cult of Step Brothers grew over the years, with fans and followers entertaining themselves with their favorite quotes. Packed with fiery punchlines and detailed story-raps, Trip and Lito return today with Step Brothers Three. Combining the raw lyricism of the first Step Brothers with the quality storytelling and higher production value of Step Brothers Two, which peaked at #60 on the Billboard 200 in 2013, SB3 is another excellent display of Trip and Lito’s uncanny chemistry, as the emcees trade quips, finish each other’s bars, and perfectly balance their unique rhyming styles over 15 excellent tracks. Released on the Ides of March, a reference to their underground hit and concert closer “Caesar & Brutus,” SB3 boasts lead single and video “Good Cop, Bad Cop,” a nuanced and empathetic take on police brutality released earlier this week. Step Brothers Three is a direct follow-up to last month’s Karate In The Garage EP, which Red Bull named the Best Mixtape of February 2017.

Explains Starlito, “This project has doses of everything that made the first two great. Our chemistry, wit, lyricism, and refusal to adhere to standard song structure will certainly satisfy our core. It’s the rawest, best rap and also touches on those current topic points that make it something that stands out in the marketplace. What makes this project great is that we are still pushing the envelope creatively & preserving what’s makes us unique: TRUTH. There are few two-person groups that can last 6 years like us. Usually something gets in the way like money, disagreements, family commitments, or one person becomes bigger than the other but we’ve done the opposite. We’ve stuck together and we’ve actually grown stronger as a group with each release.”

Though they are at their strongest when working together, Don Trip and Starlito are each beloved solo artist in their own right. A laconic, laidback emcee with a cult following and critical acclaim from the likes of Pitchfork, NOISEY, Passion Of The Weiss and others, Starlito balances world-weary rhymes with a poetic wisdom and a strong sense of humor. Hailing from Memphis, Don Trip is a firebrand with relentless energy and a talent for expressing raw emotion. He earned solo success with the Cee-Lo Green cosigned “Letter To My Son,” a heartbreaking tale about his estrangement from his infant child. Introduced to one another by popular Memphis rapper Yo Gotti, Trip and Lito caught lightning in a bottle with Step Brothers, which Pitchfork listed at #41 in their list of the 50 Best Mixtapes of the Millennium. The duo repeated their success with 2013’s Step Brothers Two, a critically acclaimed, Billboard-charting album boasting the cult hit “Caesar & Brutus,” and several other quality visuals that combined for over 10 million YouTube views. Catch Starlito and Don Trip live at SXSW this week and later this spring on the Karate In the Garage Tour, embarking on March 23rd in Detroit, with support from Scotty ATL and Red Dot. 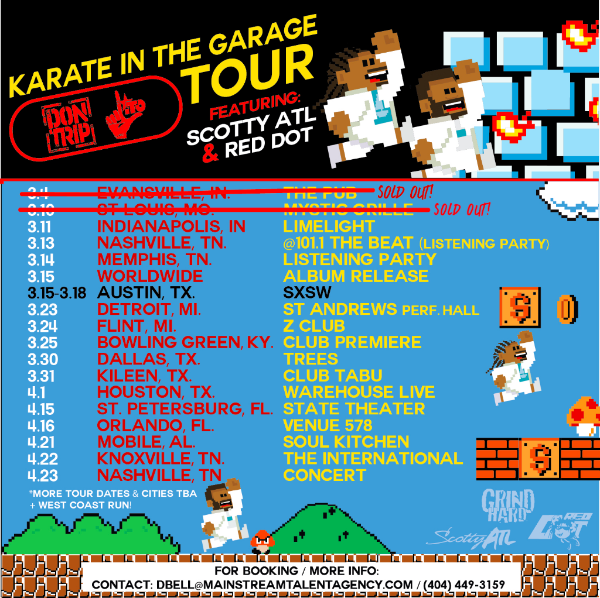