Winning a legion of fans with his honest, hooky, and emotional songwriting, Vancouver’s SonReal is a major talent. Paying tribute to his father, who passed away while SonReal was away on tour in 2016, SonReal shares the video “My Friend,” a sparely elegant ballad. Produced by Charlie Handsome(Kanye West, Young Thug) and Kenneth “Babyface” Edmonds, “My Friend” is a loving portrait of SonReal’s relationship with his father–who was the most important person in SonReal’s life until he died. In the heart-wrenching video, premiered by VIBE, SonReal slings an acoustic guitar in the rural British Columbia area where he grew up with his father, taking refuge in an unfinished house with a portrait of his father on the wall. Last week, the audio for “My Friend” premiered on Beats 1 Radio with Zane Lowe, who praised the song calling it “A piece of music that had to be made…it’s one of those songs that become things that you add to your playlist or collection and stay with you for the rest of your life.” A heartfelt and sincere ballad, “My Friend” is a deeply personal and affecting song by SonReal and a reminder for everyone to hold close to the ones you love.

Explains SonReal: “My father’s name was Glenn Stephen Hoffman. He passed away of a heart attack last year while I was on tour. My parents divorced when I was 15 and my dad always had a very hard time with that. He was an incredible person… one of the funniest people I can think of, but he suffered from mental health issues and alcohol abuse. In the years leading up to his death he became less of a father figure to me and more of a very dear friend. We would talk on the phone for hours, bullshitting about pretty much anything under the sun while he sat there smoking cigarettes with the TV playing in the background. He was one of my biggest fans. He knew all the lyrics to all my songs and always expressed how much he believed in me. When he passed away, I was terrified to write a song about it because I️ felt as though no song would do justice to his spirit. Despite that feeling, In April 2016, two months after he passed, I sat down in my home studio one night and wrote something special: ‘My Friend’. This is the music video directed by Dane Collison, who is one of my best friends and who got a chance to spend time with my father. Enjoy.”

Born in a small town in rural British Columbia, SonReal is one of the most acclaimed and popular rising stars in Canada, earning six Juno Awards nominations and ten nominations and a win at the MuchMusic Video Awards. Known for his creative and often goofily humorous music videos, such as the post-apocalyptic slapstick of his recent  “Repo Man,” SonReal recently released One Long Dream, his debut album. An infectious and inspiring record with Indian-American singer-songwriter Sid Sriram as the only guest artist, One Long Dream showcases SonReal’s facility with melody, his relatable charisma, and his sense of humor. Premiered by Highsnobiety, the album features singles and highlights such as the hit single “Can I Get A Witness?,” which has over 4.5 million streams on YouTube, “Potential,” a moving power ballad with a China-set video, and the uplifting “Problems,” with over 1 million streams on Spotify and a place on Spotify’s Pop All Day playlist. SonReal recently announced the 23-date One Long Dream Tour, which commenced on November 7th and makes stops in New York City, Toronto, and his home base of Vancouver. Tickets for the One Long Dream Tour are on sale now.

Check out the VIBE premiere: https://www.vibe.com/2017/11/sonreal-my-friend-babyface-charlie-handsome/ 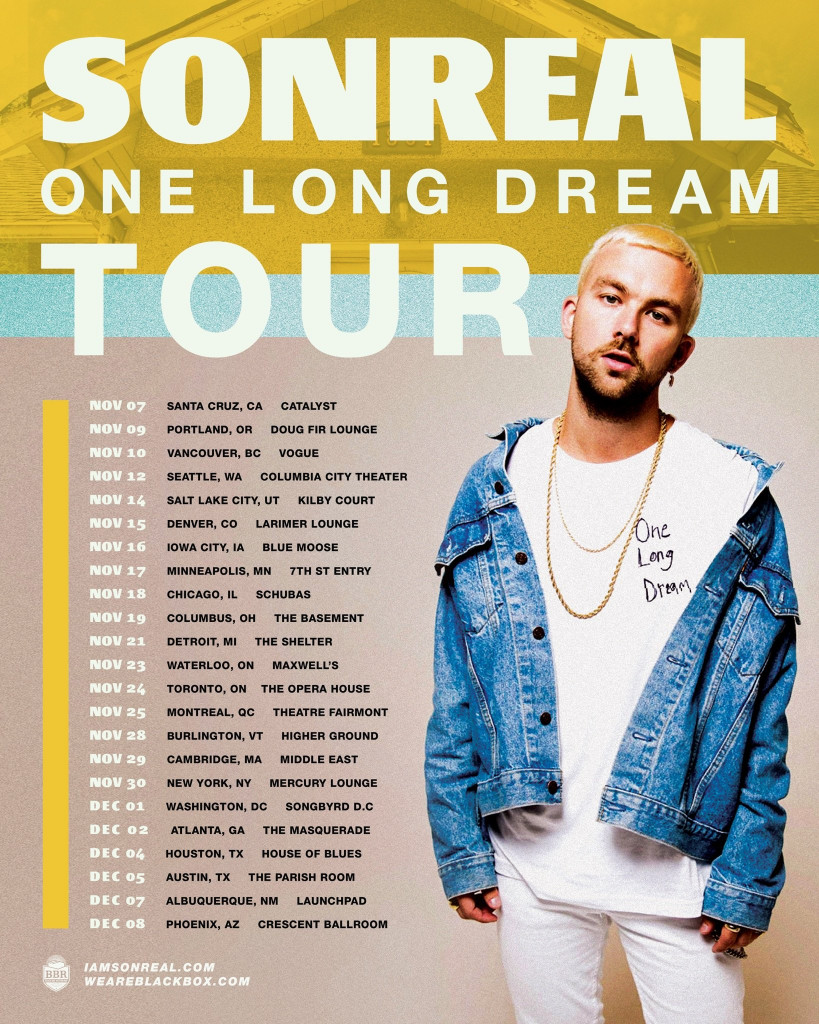