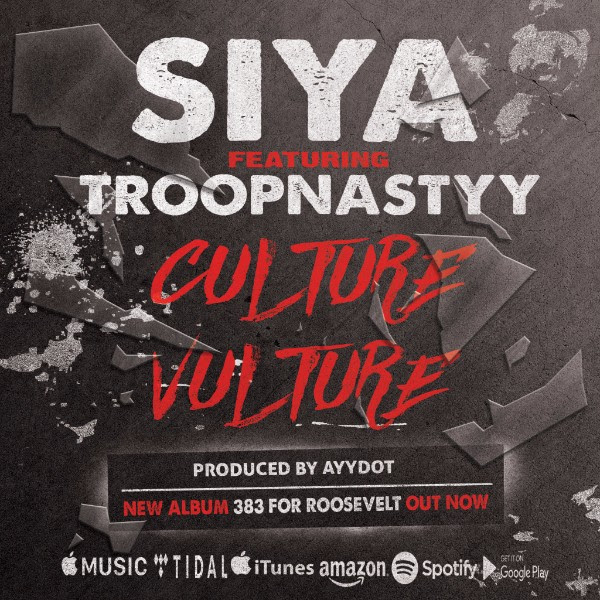 A fiercely charismatic emcee from a hip-hop crazy neighborhood in Brooklyn, Siya can go toe-for-toe with any rapper in New York City or beyond. Snarling over a minimalist, chime-driven beat, Siya throws fake rappers in the trash on “Culture Vulture,” viciously attacking those without taste or originality. Featuring an appearance from Latinx trapper Troopnastyy, who delivers a ferocious bilingual verse that speakers of any language can understand, “Culture Vulture” is one of the purest examples of Siya’s talent yet, packed with perfectly-crafted boasts, lascivious come-ons, and menacing threats. Premiered by Mass Appeal, “Culture Vulture” is a highlight from 383 – For Roosevelt, Siya’s upcoming project. Her third project in eight months and her most accomplished yet, 383 – For Roosevelt drops on July 28th.

“Culture Vulture” is the third single to drop from 383 – For Roosevelt, following the hard-nosed boom-bap banger “Your Choice,” premiered by Elevator Magazine, and the HipHopDX–premiered, Kirko Bangz-featuring “Houston Girls.” Born in California, Siya moved to Brooklyn to live with her grandmother when she was very young. Living in Bedford-Stuyvesant, home to Jay-Z, Mos Def and The Notorious B.I.G., Siya honed her rapping style before finding her style with the help of R&B icon Tank, who signed her to his label. Last year, Siya released the fully-formed SIYAvsSIYA, her debut album featuring an appearance from Sage The Gemini, equally split between sinister street rhymes and wavy, electronic-influenced love songs. Beyond music, Siya found success as a television personality, appearing in all three seasons as the breakout star of Oxygen’s Sisterhood of Hip-Hop, a T.I.-produced reality series starring five female rappers who navigate their way through the male-dominated music industry. She recently joined United Talent Agency (UTA) for representation in both film and music spheres. “Siya’s time is now,” says Mike G, her agent at UTA. “Between her amazing album & work ethic, it’s just a matter of time before the world knows how talented she is.”