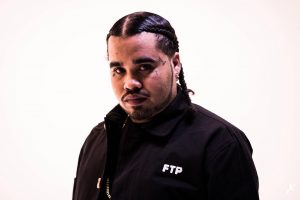 Sinking his teeth into every beat like a dog with a bone, Inglewood native Rucci is his city’s favorite son. Leaning into the dynamic duo approach that Will Smith and Martin Lawrence explored across a series of bombastic action comedies, Rucci teams up with frequent collaborator AzChike for “Bad Boys,” his new single. Running roughshod through a thumping spaghetti western-style instrumental, Rucci and AzChike revel in their own bad behavior, and flaunt the riches that their ruthless attitudes have earned them: “Walkin’ out of Saks 5th, you at Target,” snarls Rucci during the hook. Clocking in at a brisk 2 minutes and 36 seconds, “Bad Boy” is the latest hit for the South L.A. tag team that previously connected for local hits like “Light It Up” and “Function In The Hood.” “Bad Boys” is the latest single from Midget, Rucci’s upcoming album.

The follow-up to his acclaimed 2019 album Tako’s Son, Midget finds Rucci maturing as an artist, while still treating his fans to the deliriously ratchet punchlines they’ve come to expect. With instrumentals that range from hard-hitting street slappers to chill electro-funk samplers, Midget is packed with breakneck flows and relentless bars, and even gives Rucci the chance to show off his silky singing voice. Titled after a nickname given to him during his youth, Midget tells a quintessential underdog story, as Rucci works to make his own name and prove worthy of his family legacy. The album boasts recent singles like the Zapp & Roger-sampling “Killa” and the alpha dog anthem “Check Me Out” ft. Haiti Babii. Most recently, Rucci connected with Oakland heavy-hitter ALLBLACK for the vicious  “Okay Doeee.” Featuring additional appearances from Mozzy, Shordie Shordie, White John, and more, Midget arrives on September 25th via Mackk & Co/EMPIRE.

Midget is the proper sequel to Tako’s Son, which channeled personal tragedy into musical triumph. Inspired by Rucci’s street-level observations and influenced by his late rap partner Sean Mackk, the album is ultimately a celebration of family, teeming with lessons Rucci learned from his father, mother, aunts, and uncles, and also from his adopted family in the Inglewood streets. The project took its name from Rucci’s father, Tako, an established Inglewood figure, who was deported to his native El Salvador, and Rucci told the full story of his background and his relationship with his dad in an ABOVE ALL-produced documentary. Featuring the L.A. hit “Get The Strap” ft. Shoreline Mafia (5 million streams on Spotify), Tako’s Son was named one of 2019’s “10 Best Rap Albums That Raised The Bar” by NPR.