Drawing Over 225,000 Fans and Hosting 150+ Performances From the Hottest Names in Hip-Hop, Rolling Loud Miami 2021 Was the First Major Festival to Successfully Return After the Pandemic

A joyous celebration of live music’s return, Rolling Loud Miami 2021 welcomed a host of artists and a hungry crowd ready to rock out to their favorite songs after many months stuck inside. With the new Rolling Loud Miami 2021 Aftermovie, attendees can relive the unforgettable event, which took place at Hard Rock Stadium in Miami Gardens, FL in July. Expertly cut together by Rolling Loud’s internal media team, the new Aftermovie is a life-affirming montage of many of the festival’s most memorable moments–from energetic performances, to dazzling pyrotechnics, to a sold-out crowd of fans having the time of their lives–soundtracked by anthemic bangers from Rolling Loud performers like Travis Scott, Lil Baby, Young Thug, Don Toliver, Trippie Redd, and many others.

Setting the bar as the first major festival to return to the stage in 18 months, Rolling Loud boasted performances from headliners A$AP Rocky, Travis Scott, and Post Malone, welcomed dozens of rising artists for their first festival-sized performances since the start of hte pandemic, and served as a gathering place for stars like Rihanna, Diddy, Teyana Taylor, James Harden, Iman Shumpert, Tyler Herro, and many more. For the first time ever, Rolling Loud welcomed the WWE® to the festival’s main stage, hosting two star-studded bouts that aired during FOX’s WWE SmackDown®.

The Rolling Loud Miami 2021 Aftermovie arrives as Rolling Loud prepares for Rolling Loud New York, coming to Queens at the end of the month. Headlined by Travis Scott, J. Cole, and 50 Cent, the upcoming festival is Rolling Loud’s second venture in the birthplace of Hip-Hop and the first one to span three days. Beyond the headliners, the festival promises performances from superstars like Lil Uzi Vert, Lil Baby, Playboi Carti, Polo G, and Lil Durk, as well as a laundry list of NYC stars past and present, including Bobby Shmurda, Joey Bada$$, Ferg, The Diplomats, Action Bronson, Young M.A., J.I., Sheck Wes, Sheff G, Sleepy Hallow, Bizzy Banks, and many more. Occurring at Citi Field on October 28th-30th, Rolling Loud New York is officially SOLD OUT.

In December, Rolling Loud returns to the Golden State, hosting Rolling Loud California 2021. The festival boasts a truly A-List collection of headliners, recruiting J. Cole, Kid Cudi, and Future to top the bill, plus a special duo performance by Young Thug and Chris Brown, who will perform songs from their Slime & B album. Located at NOS Events Center in San Bernardino, and occurring on December 10th-12th, 2021, the festival promises a mix of national names and local heroes that paint a picture of rap’s current moment while also nodding at the rich history of the bustling West Coast rap scene. Rolling Loud California is SOLD OUT. 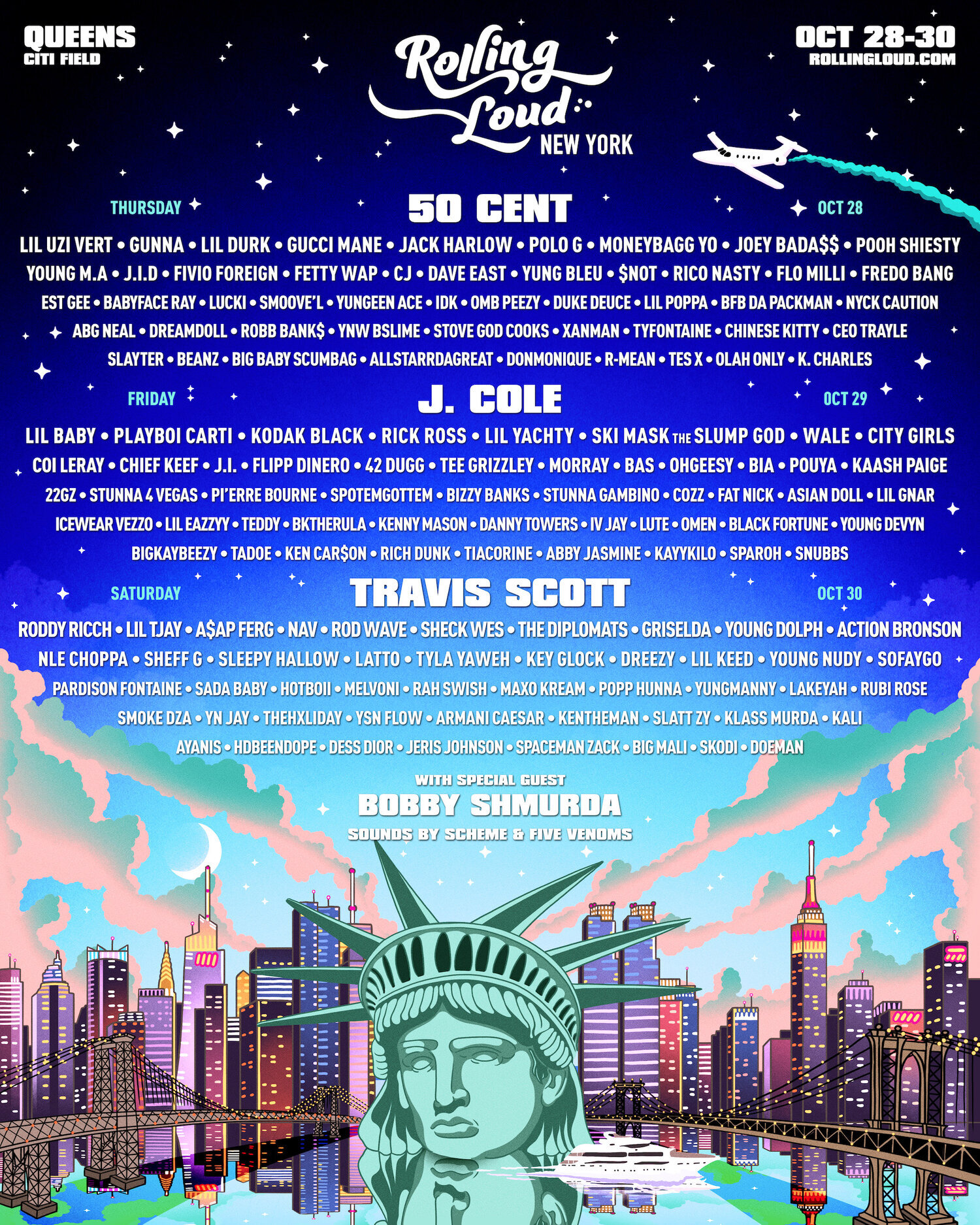