Let’s Get Ready to Rumble: Rolling Loud Partners with WWE® For an Exclusive Experience at Rolling Loud Miami 2021 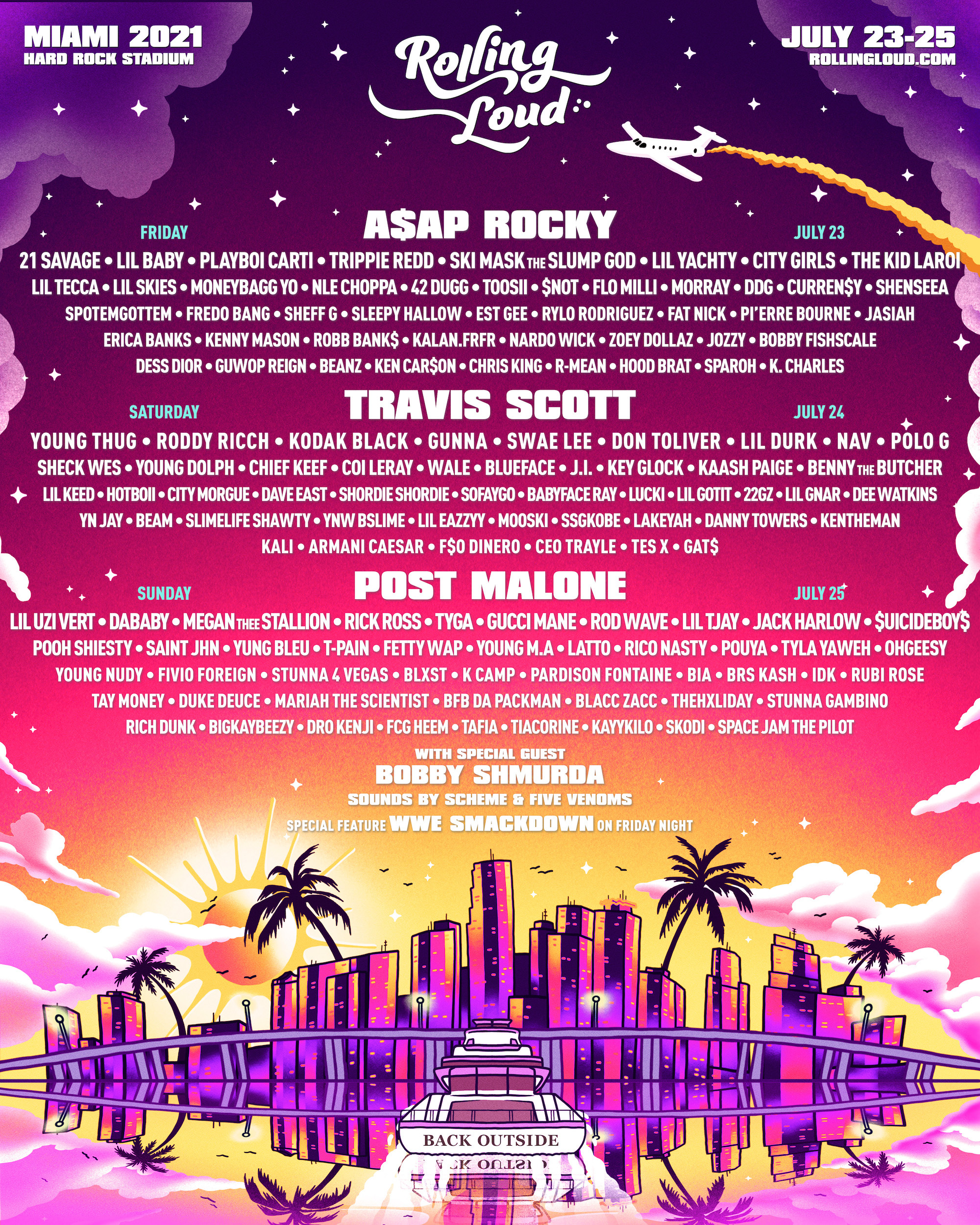 WWE® and Rolling Loud, the world’s premier rap festival, today announced a new partnership that brings Friday Night SmackDown to Rolling Loud Miami 2021 on July 23. The occasion marks the first ever collaboration between WWE and a major music festival.

Gracing the same stage as festival headliners Travis Scott, Post Malone and A$AP Rocky, WWE Superstars will compete in matches live from Rolling Loud Miami. The July 23 edition of Friday Night SmackDown on FOX will feature a split-site broadcast with multiple matches at Rolling Loud Miami, and the remainder of the evening held at Rocket Mortgage Fieldhouse in Cleveland.

“What Matt Zingler, Tariq Cherif and the entire Rolling Loud team have built is spectacular,” said Scott Zanghellini, WWE Senior Vice President, Revenue Strategy & Development. “We couldn’t think of a better partner to deliver such a unique WWE experience to fans during the July 23 edition of Friday Night SmackDown on FOX.”

“I grew up on Sweet Chin Music, mesmerized by the spectacle that Vince McMahon and co have built at WWE,” said Tariq Cherif, Co-Founder/Co-CEO of Rolling Loud. “The idea of weaving our two storylines into one world, one must see event, is electrifying.”

“And I quote! If ya smell…what the WWE and Rolling Loud…is…cookin’! Give me a hell yeah!,” said Rolling Loud Co-Founder/Co-CEO, Matt Zingler.

WWE has a rich history of integrating music into all aspects of its brand and collaborating with some of the most celebrated artists in the world. Over the years, world-renowned hip-hop artists including Snoop Dogg, Diddy, Three 6 Mafia, MGK, Wale and many others have performed at WWE’s biggest events.

Bringing 130 of the hottest acts in hip-hop to Hard Rock Stadium in Miami Gardens, Fla., the sold out Rolling Loud Miami 2021 is a triumphant return for live rap music, and a coming out party for risers and new superstars eager to play in front of a festival crowd. The sixth Rolling Loud festival in Miami, where it started as a humble one-day event in Bayfront Park, Rolling Loud Miami 2021 will occur from July 23-25.

Stay tuned for more announcements about the Rolling Loud and WWE/Friday Night SmackDown partnership in the weeks leading up to the festival. 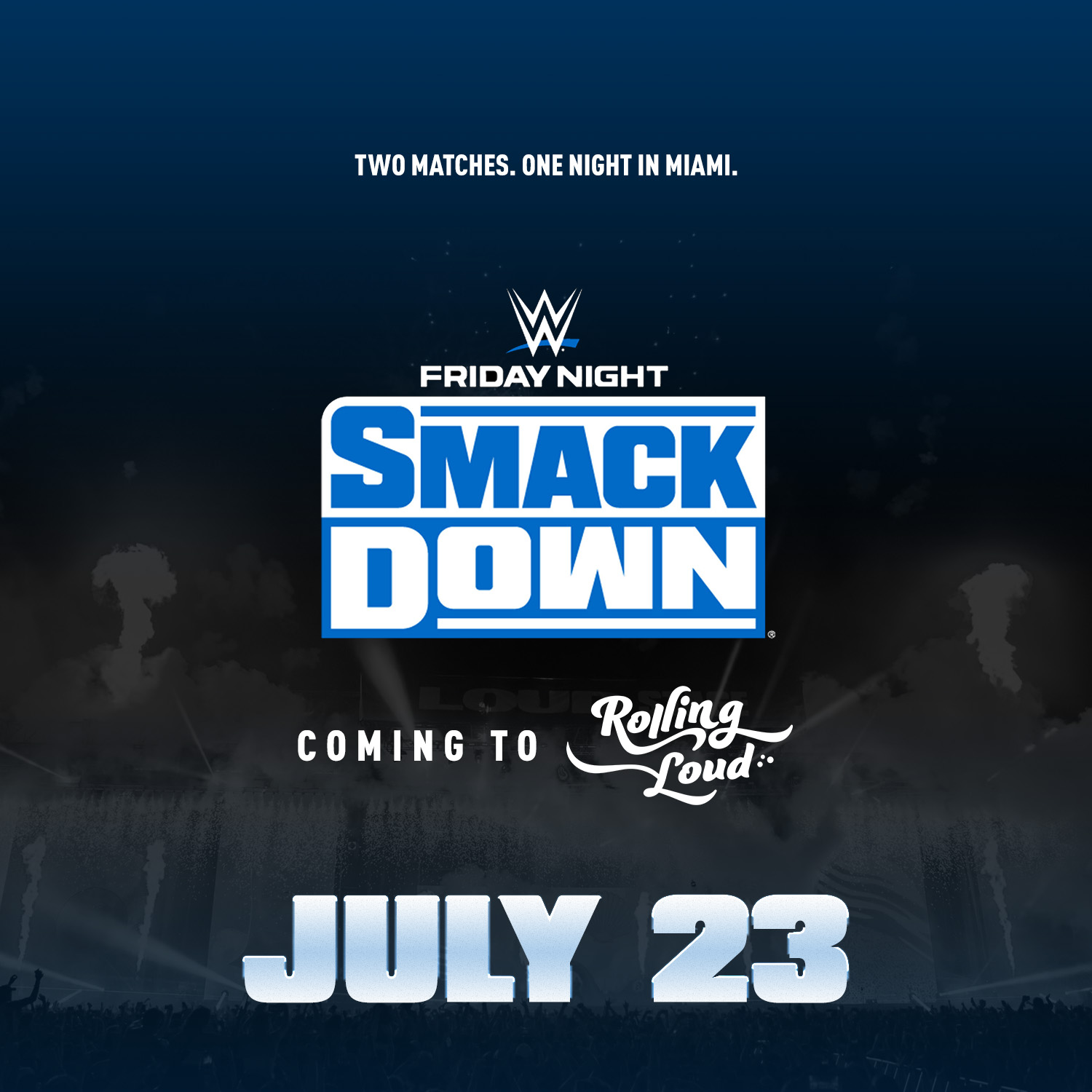 About Rolling Loud:
Founded by Matt Zingler & Tariq Cherif as a one-day Miami show, Rolling Loud has grown into a global festival phenomenon, putting on shows on both coasts and in multiple countries. Rolling Loud is the premier festival brand in hip-hop, known for its expert curation of wide-ranging lineups that reflect the state of the genre.

About WWE:
WWE, a publicly traded company (NYSE: WWE), is an integrated media organization and recognized leader in global entertainment. The Company consists of a portfolio of businesses that create and deliver original content 52 weeks a year to a global audience. WWE is committed to family-friendly entertainment on its television programming, pay-per-view, digital media and publishing platforms. WWE’s TV-PG programming can be seen in more than 900 million homes worldwide in 28 languages through world-class distribution partners including NBCUniversal, FOX Sports, BT Sport, Sony India and Rogers. The award-winning WWE Network includes all live pay-per-views, scheduled programming and a massive video-on-demand library and is currently available in more than 180 countries. In the United States, NBCUniversal’s streaming service, Peacock, is the exclusive home to WWE Network. The Company is headquartered in Stamford, Conn., with offices in New York, Los Angeles, Orlando, Dubai, London, Mexico City, Mumbai, Munich, Riyadh, Shanghai, Singapore and Tokyo.

Additional information on WWE (NYSE: WWE) can be found at wwe.com and corporate.wwe.com.

Forward-Looking Statements: This press release contains forward-looking statements pursuant to the safe harbor provisions of the Securities Litigation Reform Act of 1995, which are subject to various risks and uncertainties. These risks and uncertainties include, without limitation, risks relating to: the impact of the COVID-19 outbreak on our business, results of operations and financial condition; entering, maintaining and renewing major distribution agreements; a rapidly evolving media landscape; WWE Network (including the risk that we are unable to attract, retain and renew subscribers); our need to continue to develop creative and entertaining programs and events; the possibility of a decline in the popularity of our brand of sports entertainment; the continued importance of key performers and the services of Vincent K. McMahon; possible adverse changes in the regulatory atmosphere and related private sector initiatives; the highly competitive, rapidly changing and increasingly fragmented nature of the markets in which we operate and greater financial resources or marketplace presence of many of our competitors; uncertainties associated with international markets including possible disruptions and reputational risks; our difficulty or inability to promote and conduct our live events and/or other businesses if we do not comply with applicable regulations; our dependence on our intellectual property rights, our need to protect those rights, and the risks of our infringement of others’ intellectual property rights; the complexity of our rights agreements across distribution mechanisms and geographical areas; potential substantial liability in the event of accidents or injuries occurring during our physically demanding events including without limitation, claims alleging traumatic brain injury; large public events as well as travel to and from such events; our feature film business; our expansion into new or complementary businesses and/or strategic investments; our computer systems and online operations; privacy norms and regulations; a possible decline in general economic conditions and disruption in financial markets; our accounts receivable; our indebtedness including our convertible notes; litigation; our potential failure to meet market expectations for our financial performance, which could adversely affect our stock; Vincent K. McMahon exercises control over our affairs, and his interests may conflict with the holders of our Class A common stock; a substantial number of shares are eligible for sale by the McMahons and the sale, or the perception of possible sales, of those shares could lower our stock price; and the volatility of our Class A common stock. In addition, our dividend is dependent on a number of factors, including, among other things, our liquidity and historical and projected cash flow, strategic plan (including alternative uses of capital), our financial results and condition, contractual and legal restrictions on the payment of dividends (including under our revolving credit facility), general economic and competitive conditions and such other factors as our Board of Directors may consider relevant. Forward-looking statements made by the Company speak only as of the date made and are subject to change without any obligation on the part of the Company to update or revise them. Undue reliance should not be placed on these statements. For more information about risks and uncertainties associated with the Company’s business, please refer to the “Management’s Discussion and Analysis of Financial Condition and Results of Operations” and “Risk Factors” sections of the Company’s SEC filings, including, but not limited to, our annual report on Form 10-K and quarterly reports on Form 10-Q.

For full information, head to