GRAMMY-NOMINATED RAPPER MAKES HIS LONG-AWAITED RETURN TO THE ROAD KICKING OFF SEPTEMBER 8 IN ORLANDO, FL

RIAA-CERTIFIED GOLD DEBUT ALBUM, THATS WHAT THEY ALL SAY, OUT NOW 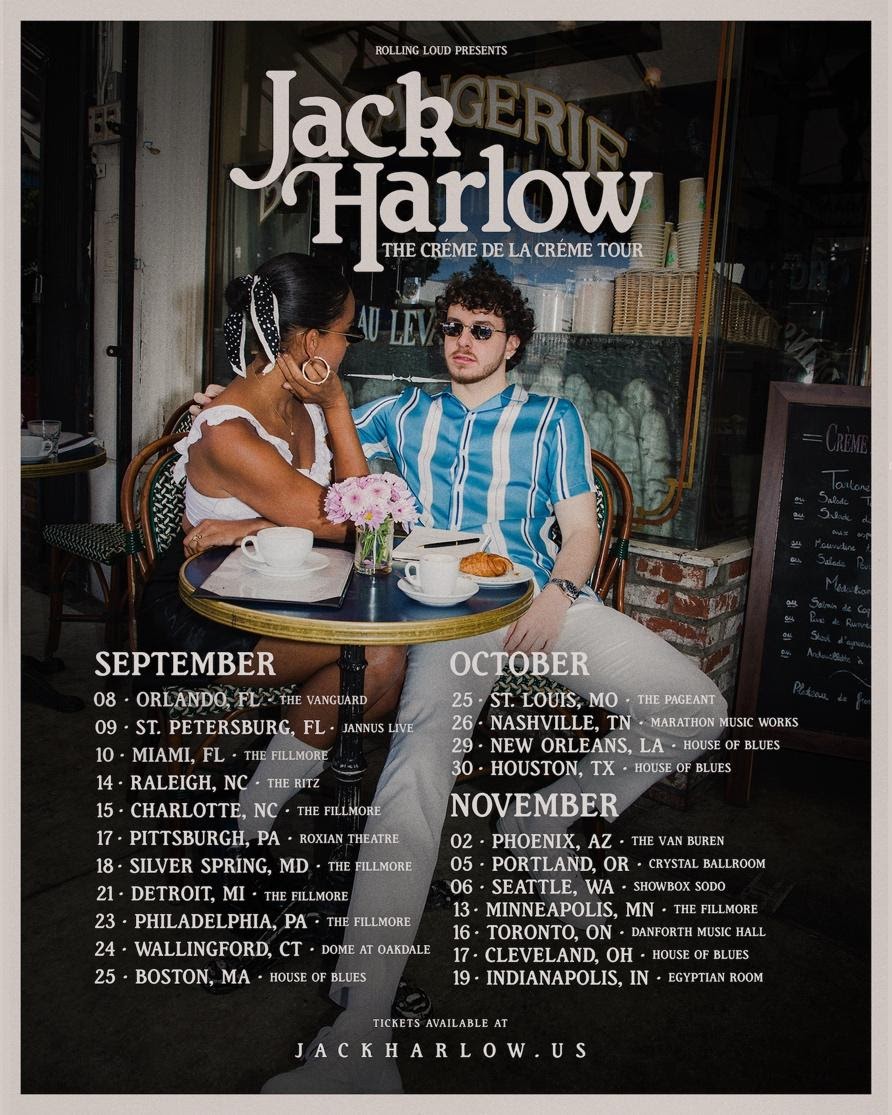 New York, NY – June 22, 2021 – After nearly 2 years, multiplatinum, GRAMMY-nominated rap superstar Jack Harlow is returning to the road for the first time in nearly 2 years, with his headlining, “Crème De La Crème Tour,” presented by Rolling Loud and Live Nation. Kicking off in Orlando, FL on September 8th, the nationwide trek will conclude in Indianapolis, IN on November 19th. Additional dates will be announced in the coming weeks. The general on-sale for tickets for the “Crème de la Crème Tour” will begin this Friday, June 25th at 10 a.m. local time. Tickets and additional information available at www.jackharlow.us.

About Rolling Loud
Founded by Matt Zingler & Tariq Cherif as a one-day Miami show, Rolling Loud has grown into a global festival phenomenon, putting on shows on both coasts and in multiple countries. Rolling Loud is the premier festival brand in hip-hop, known for its expert curation of wide-ranging lineups that reflect the state of the genre.

The festival returns from a 18-month hiatus on July 23rd-25th, with the sold out Rolling Loud Miami 2021, its biggest event yet, bringing in over 85,000 fans per day to Hard Rock Stadium in Miami Gardens, FL. With headliners Travis Scott, Post Malone and A$AP Rocky, Rolling Loud Miami 2021 is a triumphant return for live rap music, and a coming out party for risers and new superstars eager to play in front of a festival crowd. Rolling Loud Miami kicks off a massive year for the festival brand, arriving ahead of Rolling Loud New York in October and Rolling Loud California in December.

About Jack Harlow
Hailed by The FADER as a “maverick rapper destined for legendary status,” 23-year-old, Louisville, KY native Jack Harlow has quickly become one of music’s biggest stars with over 3 billion career streams to date. The Generation Now/Atlantic Records rapper has released a project a year, for the last 5 years, the most recent being his RIAA Gold-Certified, critically acclaimed debut album THATS WHAT THEY ALL SAY. The album features the 6x-Platinum single “WHATS POPPIN,” which earned Harlow his first Grammy nomination, among countless other accolades including nominations at the 2021 Billboard Music Awards, 2021 BET Awards, 2020 MTV Video Music Awards, 2020 E! People’s Choice Awards & 2020 BET Hip Hop Awards.