A rising cultural force in the world of hip-hop, Rolling Loud is renowned for their exquisite taste in music and merch. Coming through with their latest batch of unique merch, Rolling Loud officially reveals the Moto 20 Cut & Sew Collection for the aspiring rider in your life.

Created with 3m reflective elements, bold neon prints and technical fabrics, the Moto 20 collection features a classic motocross jersey-and-pants matching set, a crop top jersey, a flamed-up hoodie, and a half-zip windbreaker. Blurring the line between fashion and function, the new collection also offers moto-specific wear like goggles, gloves, and a full ski-mask–all delivered in characteristic Miami hues like neon green, minty blue, and touches of purple and fuchsia. Directed by Rolling Loud co-founder Matt Zingler and designed by Mark Braster (@brastxx) the collection is captured through the lens of Creative Director Smith Durogene and is available at shoprollingloud.com in limited quantities: 150 pieces, no restocks and no preorders.

“Rolling Loud has a lot of amazing Cut & Sew capsules dropping,” says Matt Zingler. “The quality is on point and the quantities will all be limited. I have always been into collecting vintage tees and accessories. The goal is to create time stamped capsules representing a Rolling Loud era so that in the future they will be a highly collectible vintage item. Don’t sleep, this will sell out!” 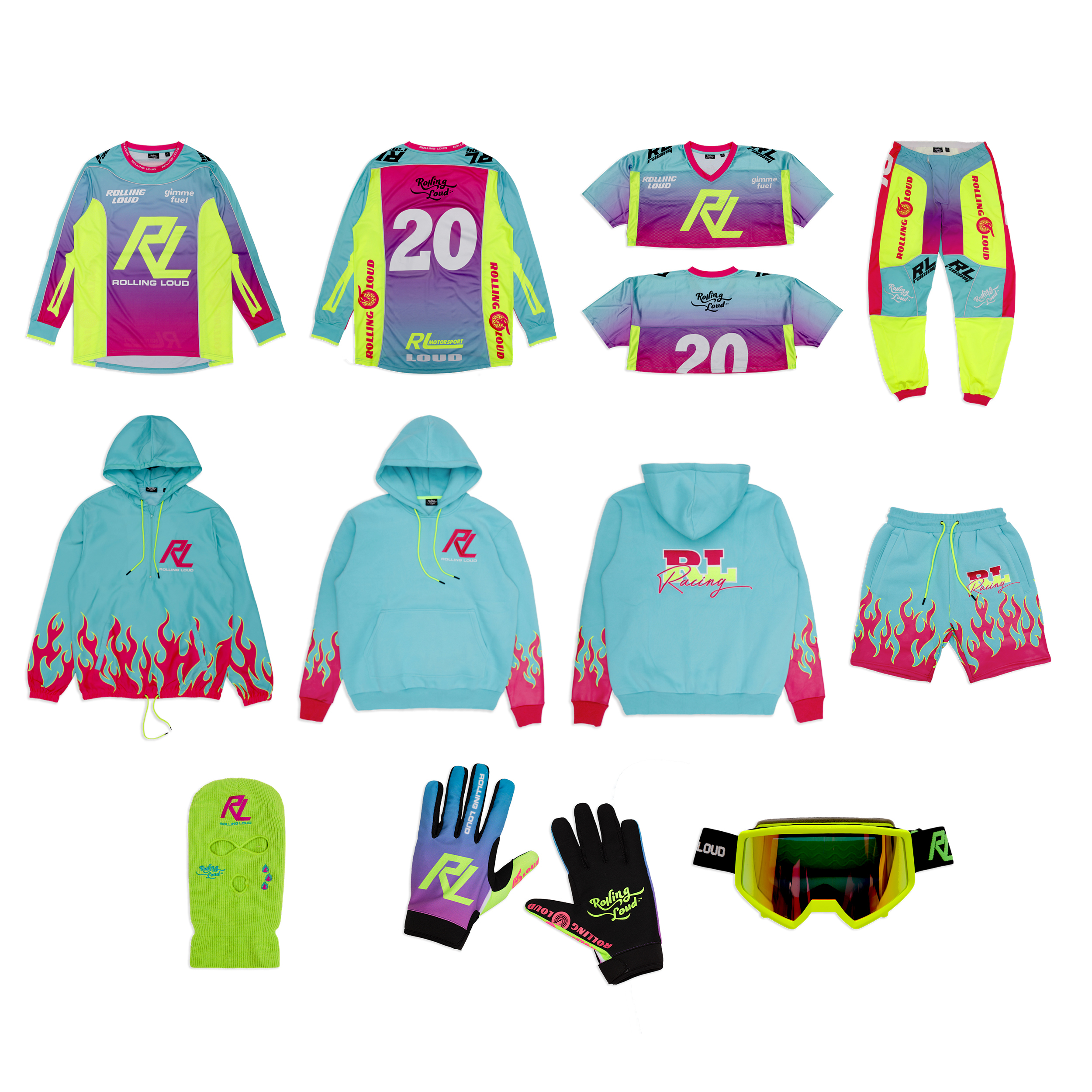 About Rolling Loud
Founded as a one-day festival in 2015 by Matt Zingler and Tariq Cherif, Rolling Loud has evolved into a global behemoth, with annual festivals in Miami, Los Angeles, New York, and the Bay Area. Postponed due to the COVID-19 pandemic, Rolling Loud Miami is scheduled for February 2021, and Rolling Loud Portugal, the brand’s first European festival, recently announced the lineup for next Summer. The company’s new Twitch partnership speaks to the strength of its brand, allowing Rolling Loud to maintain its vital cultural role during an impossibly difficult time for festivals and live music.

In October 2019, Rolling Loud hosted the first annual Rolling Loud New York, which boasted one of the brand’s most impressive lineups yet, and in December, it drew 65,000 fans per day to Banc of California Stadium for Rolling Loud Los Angeles.

About the Moto 20 Cut & Sew Capsule Collection:
The RL MOTO 20 Collection is inspired by the times, by the streets, an escape from the occasional doldrums of 2020.  Where FMX meets the block you’ll find lifestyle pieces that blur the lines of fashion and function. An 8 piece cut and sew capsule the Moto 20 line features 3m reflective elements, bold neon prints and technical fabrics. Directed by RL Founder Matt Zingler and designed by Mark Braster (@brastxx) the collection is captured through the lens of Creative Director Smith Durogene and will be available at shoprollingloud.com Friday, September 11th in limited quantities, 150 pieces, no restocks and no preorders.