The St. Petersburg, Florida-Born Rhymer Retreats to a Remote Church in the Video for the Soulful “Close Enough To Hurt”

Just 21-years-old but with the voice and the demeanor of a grizzled veteran, Florida’s Rod Wave is a unique figure in the Southern rap scene. Preparing his third standout project in less than twelve months, Rod announces Ghetto Gospel, his upcoming album. The follow-up to June’s PTSD mixtape, which boasts Rod’s breakthrough hit “Popular Loner” (13+ million views), Ghetto Gospel is an accurate descriptive turn for Rod’s spiritual and nakedly-emotional blend of rap music, defined by Rod’s unique singing ability, able to switch from a bluesy croon to rapid-fire triplets at a moments notice. Executive produced by Kevin Gates, and featuring the recently released Gates/Rod collab “Cuban Links” (over 1 million views in its first 24 hours of release), the album is packed with soulful ruminations on Rod’s early life in St. Petersburg, his grappling with his newfound status, and everything in between. The upcoming album also features Rod’s recent “Heart On Ice” (Remix), which features an appearance from Lil Durk and has over 3 million streams across platforms. Rod’s official debut album, Ghetto Gospel releases on November 1st via Alamo Records.

Along with the announcement of Ghetto Gospel, Rod Wave shares “Close Enough to Hurt,” a new video single from  the project. Produced by Drum Dummie and Ashton Sellars, “Close Enough To Hurt” finds Rod emoting atop mournful electric guitar progression and stuttering trap drums, emphasizing his desire to keep new faces at arms length–they haven’t been through what he’s been through: “Opening up make me worry/And new faces make me nervous/Like where these n****s was when we was sliding in my Acura/Now they wanna pop out cause them R’s is in the back of us.” In the video, Rod retreats to a remote area in the California wilderness, posting up at an abandoned, Spanish-style church to get in touch with his spirituality and take a break from his life as a rising rap star.

The St. Petersburg native recently started his run as a supporting act for Kevin Gates on the nationwide “I’m Him Tour.” Also featuring support from YK Osiris and SDot Fresh, the 33-date nationwide tour recently stopped in New York (Terminal 5) and makes its way to Los Angeles on November 27th (The Novo). Tickets for the “I’m Him Tour” are available now.

Buy tickets for the “I’m Him Tour”: https://www.kvngates.com/tour 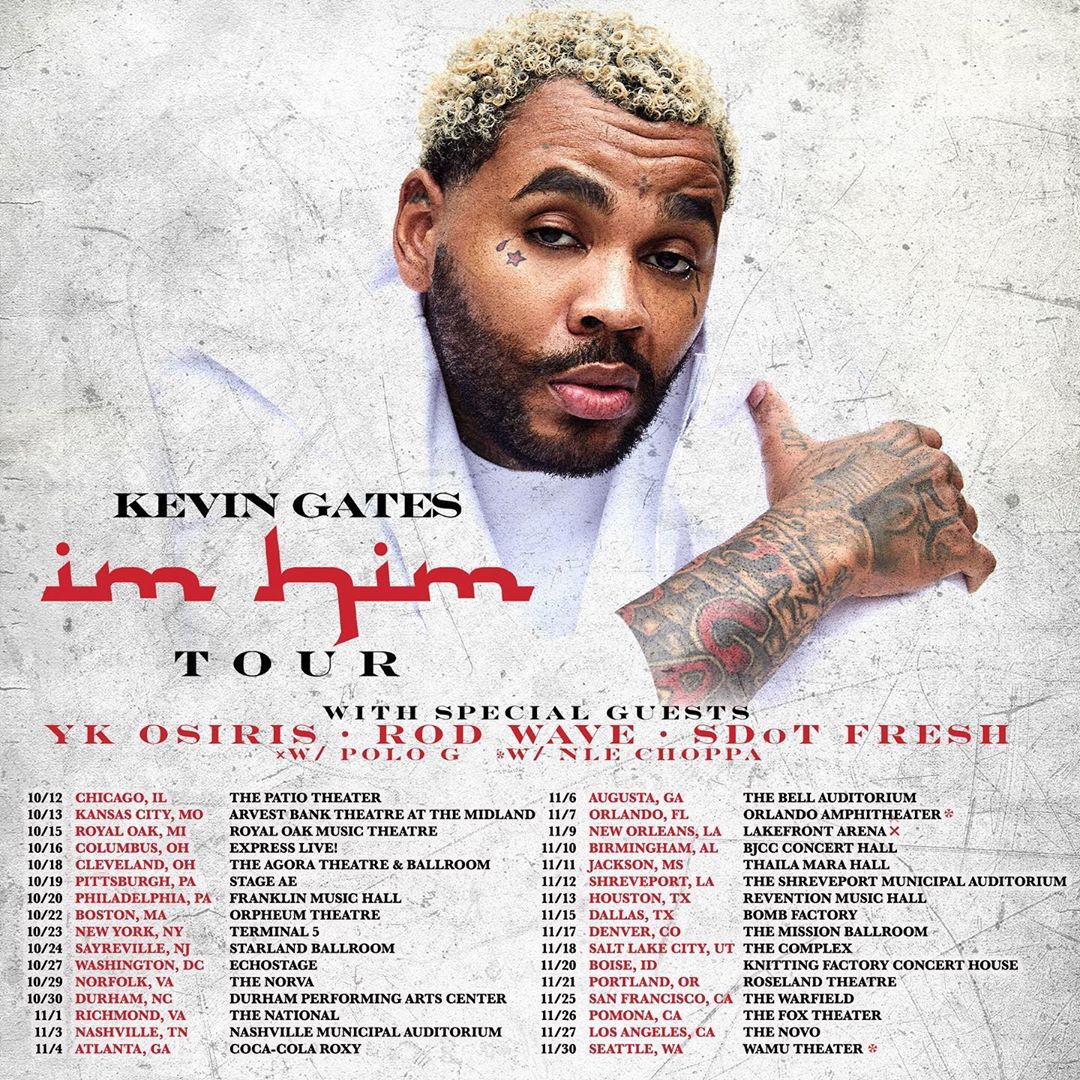 Buy tickets for the “Heart On Ice Tour”: http://www.eventbrite.com/d/united-states–florida/rod-wave