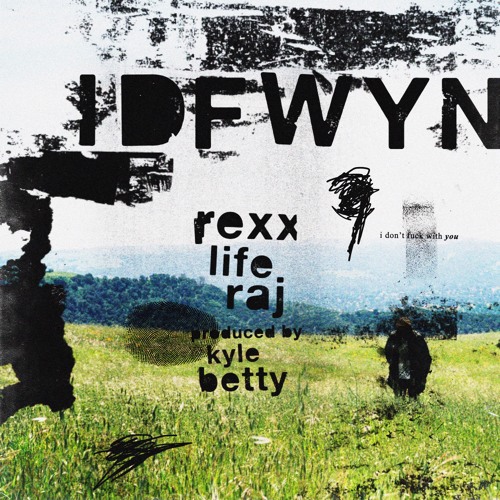 A gentle giant with a smooth singing voice and curious mind, Rexx Life Raj has been creating infectious, melodic music while steadily making himself known in the industry. After a crazy year of playing music for Pharrell, touring with Mr. Carmack and Mike Gao, as well as collaborating with Mozzy, Russ, and more, Raj’s newfound success is coming with some negatives. In “IDFWYN,” the Berkeley artist lays it down for the fakes. Following up the existential awakening of “Handheld GPS” from last June’s Father Figure, which has earned nearly 4 million plays on Spotify, “IDFWYN” dives deeper into the mind of the Bay Area native, providing unfiltered thoughts on his come up. Produced by Kyle Betty and premiered byEARMILK, “IDFWYN” is yet another shining example of Rexx Life Raj’s deeply cerebral take on Bay Area rap, solidifying his place as “the light of his city.”

“Being in the music industry exposes you to a lot of fake shit. People who’ll befriend you only in hopes of using you or getting something out of you,” explains Rexx Life Raj. “Rappers acting like something they’re not, trying to be famous. Lots of leeches. This is song is to all those people. ‘Real recognize real and you don’t look familiar!'”

The son of a Black Panther and a former athlete in Boise State’s Division I football program, Rexx Life Raj was the first of his family to graduate from college. In the past year, he earned glowing press coverage from Billboard, Pigeons & Planes, Pitchfork, Noisey, and XXL, and earned the cover spot on Spotify’s Mellow Bars playlist. Following the release of his debut album Father Figure in 2016, Rexx Life Raj garnered co-signs from the likes of Pharrell, G-Eazy, Russ, and collaborations with Mozzy on “Tomorrow Ain’t Promised” and Nef The Pharaoh on “Moxie Java.” Raj parlayed the momentum from Father Figure into 2017, earning over 1 million plays on his single “Waiting For You.” As he said to East Bay Express in a feature story last year, “I look at music as an opportunity to spread both wisdom and knowledge to the youth. A lot of times, artists get caught up in what sounds good, and in the process they end up feeding people — mostly kids — a lot of bullshit. I don’t want to make the same mistake.” Look for more emotionally honest and intellectually captivating music from Rexx Life Raj later this year.

Check out the EARMILK premiere: https://earmilk.com/2017/09/12/rexx-life-raj-puts-the-game-on-notice-with-idfwyn-premiere/