Single: Ralo – “The World Against Me” (Prod. by Murrille) Using his helium-voiced caterwaul to explore his innermost thoughts, ATL rapper Ralo brings a dose of emotion and pathos into his trap music. Staring down the law and remaining steadfast in his innocence and his standing in the community, Ralo faces his critics and enemies in “The World Against Me.” Rhyming over a soulful instrumental from producer Merrille, Ralo poses several questions that provide a revealing look into his headspace: “Sometimes when I wake up, I feel like the world against me/How feel lonely when you get that much attention?” “The World Against Me” is the latest single from Conspiracy, Ralo’s upcoming project, following the YFN Lucci-featuring “Bosses Make Sure,” premiered last week by HotNewHipHop.

Injecting infectious melody into his emotional street tales, ATL 23-year-old Ralo rhymes like a veteran. Populated with soaring, bombastic, and inspirational trap instrumentals courtesy of Will-A-Fool,Twysted Genius, OG Drum Major, Goose, and more, Conspiracy finds Ralo dwelling on his legal issues on songs such as “The Last Re-Up” and “The World Against Me,” focusing particularly on the legal system’s bias against young black men, and reflecting on the state of his soul on tracks like “Same Me” and “Praying For Me.” Featuring appearances from YFN Lucci, Shy Glizzy, Young Scooter, and more, Conspiracy hits online retailers and streaming services on October 12th via EMPIRE.

Listen to “The World Against Me”: https://soundcloud.com/ralofamerica/the-world-against-me-prod-by-murrille 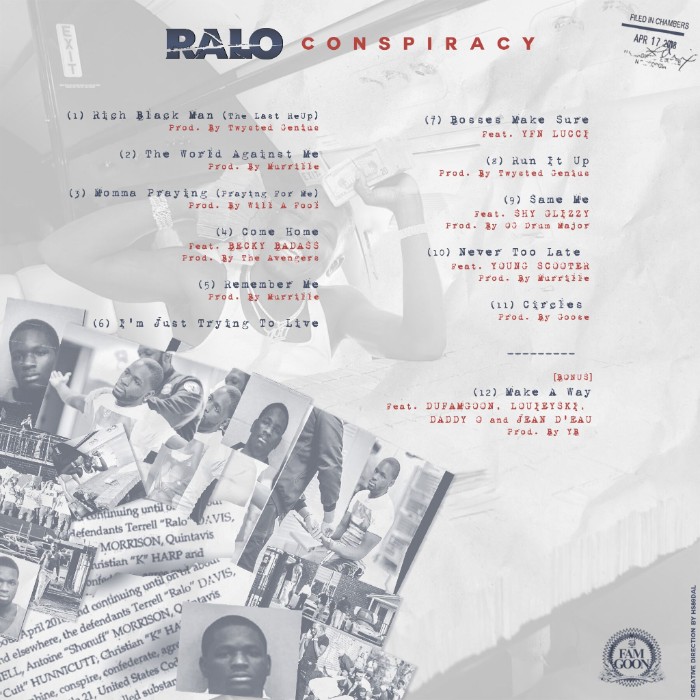