The L.A. Underground Heroes Release Their First Album Since 2012 and Turn All the Way Up in the Colorful Noisey-Premiered “Stoked” Visual 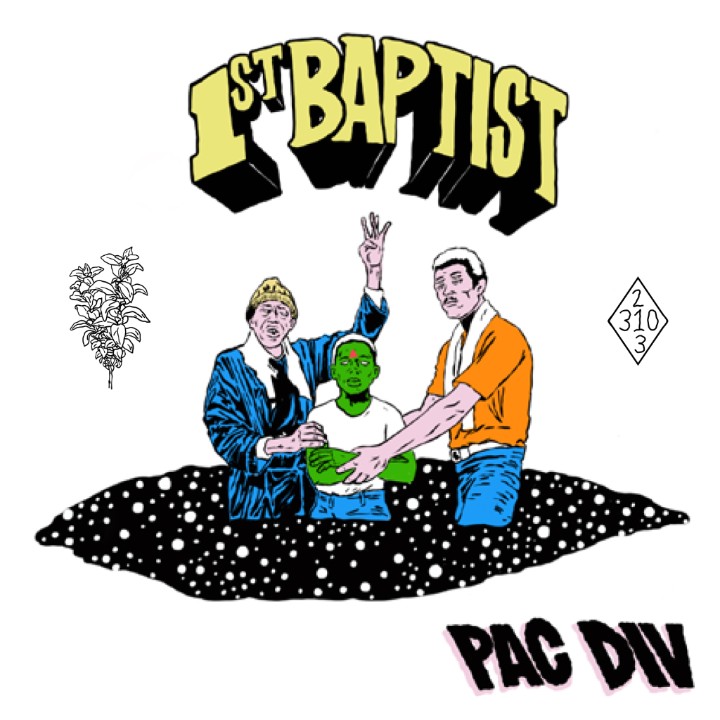 Weaving intricate rhymes with an infectious attitude, Pac Div stands up for the true spirit of hip-hop. Sharing their first new album since 2012’s GMB, Pac Div regains their original form on 1st Baptist. Fusing classic sounds of west coast rap with a deep spirituality and irrepressible energy, Pac Div don’t miss a beat on the new album. Demonstrating lyrical acrobatics over a kaleidoscopic collection of West Coast instrumentals, LIKE, Mibbs, and BeYoung bounce lines off each other, trading bars, uniting for hooks, and generally sounding enthralled with the act of rapping. With production from DJ Dahi, Swiff D, Huss, Esta, James Rodgers, and from the trio’s LIKE, the upcoming album recaptures the spirit and vibe of Pac Div’s original run of mixtapes with a sound updated for the future.

Rolling into a liquor store for a drink and a pack of Backwoods, the California trio receives a surprise in “Stoked,” their new video. After buying a scratch-off lottery ticket on a whim, the Div gets lucky and tumbles into a world of delirium, complete with fish-eye lenses, changing color schemes, and floating cartoon clouds. Premiered by Noisey and directed by F1V3, the new video perfectly encapsulates the outlandish spirit of the single, an aggressive and energetic new banger for those trying to hustle their way to the top.

Formerly known as Pacific Division, Pac Div formed in the early ’00s, when the three members were in high school. Comprised of brothers LIKE and Mibbs and their friend BeYoung, the group first gained attention with Sealed For Freshness (Blend Tape), their debut mixtape, earning comparisons to L.A. legends like The Pharcyde and Freestyle Fellowship. Winning high profile fans such as Snoop Dogg, Questlove, and others, Pac Div built buzz with a series of popular mixtapes. In 2011, Pac Div released their debut album The DiV, which featured production from DJ Dahi and No I.D., and quickly followed it up with GMB, which peaked at #15 on the Billboard Heatseekers chart and debuted at #57 on the Hip-Hop/R&B chart. After GMB, the group focused on solo endeavors–LIKE became an in-demand presence as a rapper and a two-time Grammy nominated producer (landing a production credit on “Sing About Me” by Kendrick Lamar and “Room In Here” by Anderson .PAAK), Mibbs released a series of EPs including one produced by Scoop DeVille (Kendrick Lamar, Snoop Dogg), and BeYoung released a series of mixtapes. Though they pursued separate projects, The Div never forgot their roots–now they’re back, getting ready for the release of 1st Baptist on April 13th.