Debuted by XXL, the Rapper/Producer Drops Hyphy Video Single From More Than Anything, Due May 12th

Brimming with boundless energy and an great ear for hooks, P-Lo is capable of turning a routine trip to the DMV into an occasion to get lit. Kicking it with crash test dummies and speeding during his driving test, P-Lo shows off his effortless charm in “Put Me On Somethin’,” his latest video. Produced with bounce by P-Lo himself, the Filipino-American rapper recruits E-40, the Counselor, to spit a typically witty verse: “Stop babysitting, pass it/My Fetti stretch like elastic/Yeah bro, I gotta have it/Born to trap–survival tactics.” Premiered by XXL, “Put Me On Somethin'” is a highlight from More Than Anything, P-Lo’s upcoming project. The follow up to 2016’s Before Anything, More Than Anything releases on May 12th.

“This video is inspired by going to the DMV and being bored completely out of your mind. It represents a lot of double meanings,” P-Lo explained to XXL. “E-40 teaching me the game, but is also my driving instructor. The first driving instructor, he wasn’t liking me based on my appearance and energy, not knowing I was well-equipped to drive, but that’s a lot of people’s first impressions of me—just because you look a certain way, judging a book by a cover… The song itself is a real statement song. When Bay Area gives so much style and culture to the game and people ignore or disregard it. We’re always putting people onto game. The game needs to give back also. They need me put me on something. I can’t keep putting you on, y’all gotta give me something too.”

With his signature snare snaps and hypnotic keyboard riffs, P-Lo is one of the defining architects behind the sound of modern West Coast rap. Born and raised in Pinole, CA, P-Lo founded the HBK Gang with Iamsu! when they were both in high school in 2005. Comprising artists such as P-Lo, Iamsu!, Kehlani, Sage The Gemini, Jay Ant, Kool John, and others, HBK has been one of the most influential rap collectives in the game. With Jay Ant and Iamsu!, P-Lo built a name for himself as a member of The Invasion, producing many of HBK’s biggest hits, including Iamsu’s “Only That Real,” ft. 2 Chainz, and became an in-demand producer nationwide. In 2013, P-Lo had a big hit with Yo Gotti’s “Act Right,” which peaked at #100 on the Hot 100.

On More Than Anything, P-Lo comes into his own as a rapper, showcasing his flow over his own production and high-quality beats from the likes of Cal-A, Nic Nac, Feez, Jay Ant, Mikos Da Gawd, ReeceBeats, and more. Featuring appearances from E-40, G-Eazy, Marc E Bassy, Skizzy Mars, Iamsu!, Rexx Life Raj, Feez, Kool John, More Than Anything proves that P-Lo brings much more to the table than just slaps. Catch P-Lo on an upcoming tour with Rexx Life Raj, and pre-order More Than Anything on iTunes.

Pre-order More Than Anything: https://itunes.apple.com/us/album/more-than-anything/id1227550577?ls=1&app=itunes 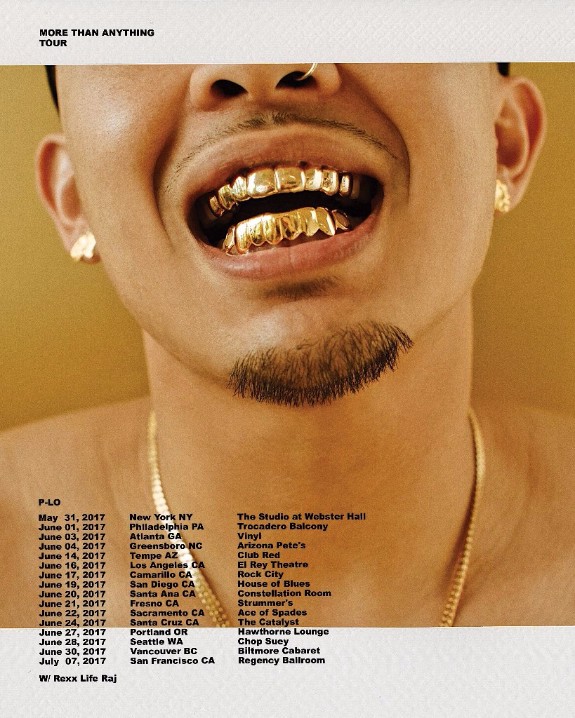