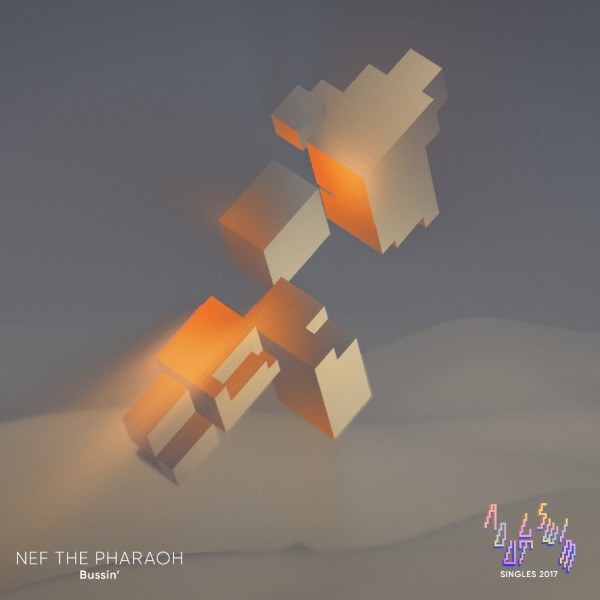 Annihilating hyphy instrumentals with his buoyant and elastic flow, Nef The Pharaoh is one of the most unpredictable and entertaining emcees on the West Coast. It comes as no surprise that Nef would turn heads at Adult Swim, which champions underground artists and left-of-center idiosyncrasy in television and music. Kicking off the Adult Swim Singles series for 2018, Nef The Pharaoh shares “Bussin‘,” a gloriously over-the-top hybrid of Bay Area mob and Southern trap. Produced by M.A. the Pilot, the track will also be featured on Nef’s previously announced project Big Chang Theory, coming in Q1 2018. Listen to Nef stunt over orchestral stabs, handclaps and flute-infused production to start your year right.

Sharing a free single every week for 52 weeks, Adult Swim developed a well-earned reputation for musical curation and tastemaking in recent years. Releasing songs from artists as diverse as Brian Eno, Run The Jewels, Chad VanGaalen, G. Perico, Zaytoven, Clams Casino, IDK, Oddisee and many others, Adult Swim Singles provide an excellent opportunity for rising artists, including nightly airtime in Adult Swim commercials and mentions in Adult Swim social media. Spearheaded by creative director Jason Demarco, Adult Swim Singles expanded from 31 to 52 tracks in 2017, bringing an enviable collection of talent and a diverse set of songs to an eager audience.

Combining an old-school, colorful rhyming style with pristine, state-of-the-art Bay Area production, Nef turned heads with 2017’s The Chang Project. A mature effort from the Sick Wid It signee, representative of his growth from teenaged phenom to a father and a leaderthe album boasted appearances from Ty Dolla $ign, Larry June, Caleborate, SOB x RBE, OMB Peezy, Jay Ant, and others. This past summer, Nef The Pharaoh opened for A$AP Ferg at the Museum of Modern Art in New York City, and graced the stage this as a hometown hero at Rolling Loud Bay Area. Most recently, Nef released a series of loose singles and videos, as he somberly and intelligently addressed social issues in the video for “LOE Gino’s Interlude,”Nef’s collaboration with fellow Oakland rapper LOE Gino, and then quickly changed gears for the fun-loving, funky, Nickelodeon-influenced “Kenan & Kel.” In December, Nef The Pharaoh graced the stage of Rolling Loud Southern California in Mountain View, California.

Adult Swim (AdultSwim.com), launched in 2001, is Turner’s network offering original and acquired animated and live-action series for young adults. Airing nightly from 8 p.m. to 6 a.m. (ET/PT), Adult Swim is basic cable’s #1 network with persons 18-34 and 18-49, and is seen in 94 million U.S. homes.