Vallejo, California’s Nef The Pharaoh‘s elastic flow, affinity for sharp wordplay, and outsized charisma combine to make him one of the most popular and promising young rappers in the flourishing Bay Area hip-hop scene. Returning with his first new project of 2017, Nef shares The Chang Project, an effervescent portrait of the 22-year-old’s life as a rising rapper and recent father. Combining an old-school, colorful rhyming style with pristine, state-of-the-art Bay Area production, The Chang Project is a mature effort from Big Chang Chang, boasting highlights such as “Out There,” a poignant, yet buoyant tribute to The Jacka, the modal Timbaland-esque throwback “Bass Head,” and the OMB Peezy and Jay Ant featuring electro rap “Move4.” Featuring appearances from Ty Dolla $ign, Larry June, Caleborate, OMB Peezy, Jay Ant, and others, but anchored by Nef’s ineffable energy and personality, The Chang Project is a consistent and absurdly fun slice of Bay Area rap, and the perfect appetizer for Nef’s upcoming debut album, The Big Chang Theory.

“I consider this the prelude to the upcoming Big Chang Theory album. I called it The Chang Project because one, Chang is my nickname and two, it’s my alias project. It’s 100% me, 100% Chang,” Nef explains. “Nobody told me what to say. Nobody told me to use these beats or get these features. It’s all music that I wanted to make and to hear. I’d categorize this project as ‘road trip music’ because it flows well from beginning to end. It was created for you to have fun experiences to with friends, riding to wherever you’re going. I was given the nickname ‘Chang’ by the late, great Johnny Ca$h, a popular rapper from the Bay Area who passed away 10 years ago. He rapped in the groups Money Gang and HoodFellas. I’d see him riding around with his fancy lifestyle and I’d compliment him on his jewelry and he’d me, ‘One day, you’ll have this too, Little Chang.’ I never got the chance to ask him how he came up with my name before he passed but I think it’s the sound of chains clinking, Like ‘chang chang.'”

After breaking out at the age of 19 with his 2015 radio smash “Big Tymin’,” Nef The Pharaoh continued to build his legend with  two acclaimed mixtapes in 2016. The first tape, Neffy Got Wings, was an acclaimed full-length collab with “That Part” producer Cardo, and was followed by Fresh Outta Space 3 . Nef then went on a world tour supporting G-Eazy, showing that he’s ready to transition from regional stardom to national recognition. In the past two weeks, Nef shared the Noisey-premiered “Spice,” which featured SOB x RBE’s Yhung T.O., teamed up with Ty Dolla $ign for the Billboard-debuted sex jam “Back Out,” and recruited SOB x RBE’s Slimmy B for the aggressively lyrical “Bling Blaow.“ Released via Sick Wid It Records, The Chang Project is now available for stream and purchase.

Check out the XXL premiere: http://www.xxlmag.com/news/2017/04/nef-the-pharaoh-chang-project/ 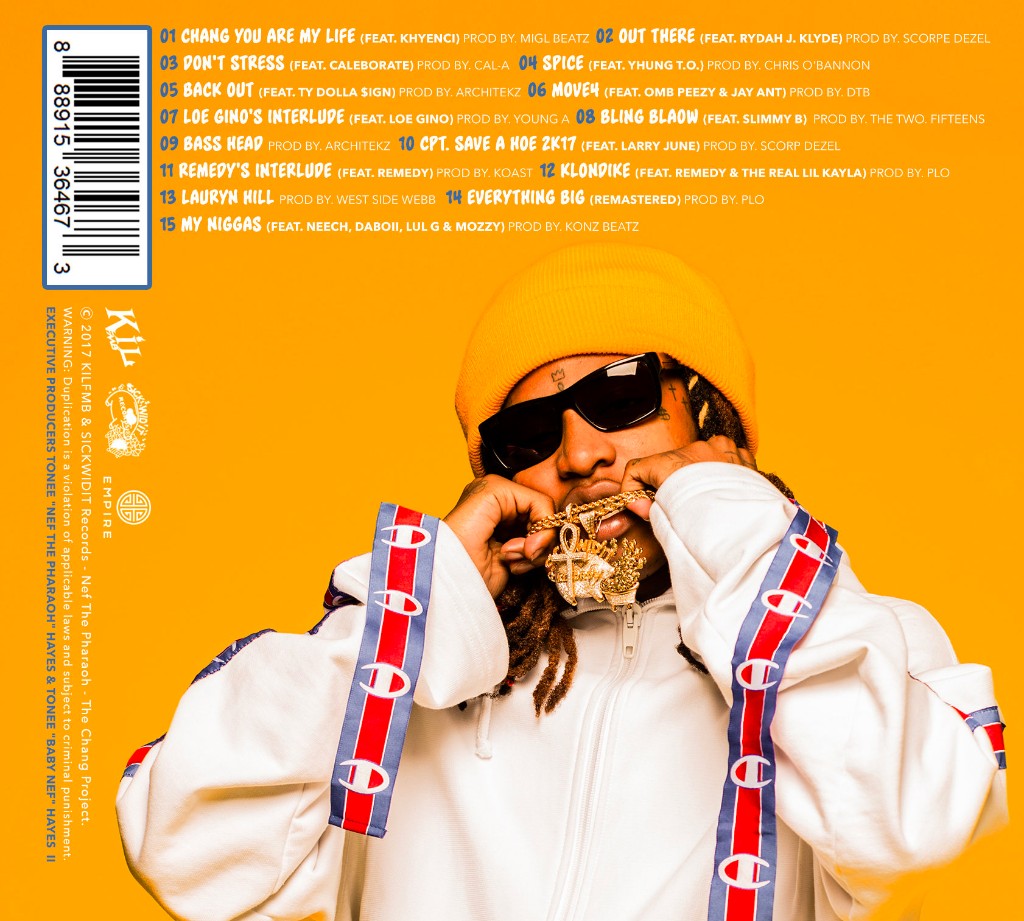