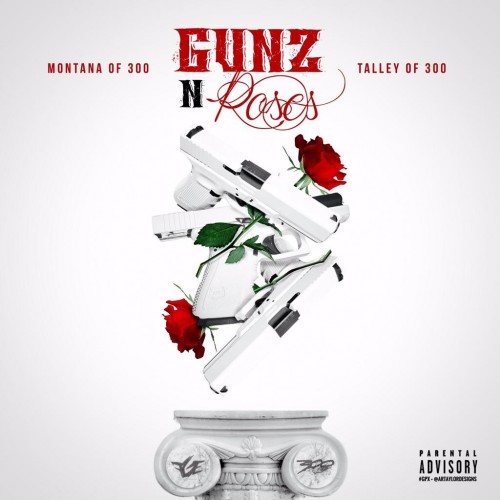 After several months of video singles teasing the album, buzzworthy Chicago rapper Montana of 300 and up-n-coming Illinois rapper/singer Talley of 300 have released their collaborative album, Gunz N Roses. On the hard-hitting project, Montana of 300 also introduces young Illinois rappers $avage and No Fatigue on “FGE Cypher,” which they’ve released a music video for in accompaniment to the album, while newcomer singer Jalyn Sanders flexes his vocals on two of the project’s catchier singles “She Love It” and “Go Crazy.” Gunz N Roses is releasing in advance of Montana of 300’s next solo album, Fire in the Church, which is slated to release in 2016.

Montana of 300 and Talley of 300 released their video single “MF’s Mad” via Complex last week, where Talley flaunts about Polos and Jordans, even embracing their insignificance as he croons out a chorus that glamorizes carefree spending, while Montana boasts about an inability to lack before seemingly killing all speculation of a label deal in the works with a metaphor-driven verse that declares “I gotta excel, racial profilin’ from 12/ bonded right outta that jail, got bars like a cell/ Rap God I’m not up for sale, my lyrics hotter than hell.” The track followed video singles “Gas Mask,” “Nothing New,” and “You Know,” which have combined for more than two million views.

Maybe best known for his sleeper hit “Ice Cream Truck” and an on-going series of fire-breathing remixes, Montana of 300 took on one of his first acting roles earlier this year appearing in the first two episodes of Empire this season, taking part in a prison cypher scene alongside Terrence Howard. It was during the filming earlier this summer where he met Chris Rock, who introduced him to Rick Rubin, later making headlines when photos of a session at Rick’s home studio leaked. In October, Montana of 300’s single “Slaughterhouse” – which released nearly a year prior on his Cursed With A Blessing album and got a boost from a newly released video – landed at #18 on Billboard’s Emerging Artists Chart.