Bringing back-to-back flurries of mind-blowing metaphors, unforgettable quotes, and inspirational stories of struggle, Montana Of 300 is not to be messed with on his latest album, Fire In The Church, which is now available for purchase on iTunes – currently at #2 on Hip-Hop/Rap charts and #12 on all genre Music charts – and streaming on Spotify. A Collector’s Edition Rap Bible is available with textured and gold foil embossed packaging including a 48 page lyric and photo book.  The passionate emcee has been cementing his place in the game with an impressive stream of original video singles and remix videos which have accumulated more than 160 million YouTube views, building one of hip-hop’s most dedicated fanbases. A man who takes pride in his independence, Montana Of 300 proves that the attention he’s been receiving is warranted as he thrives on the 18-track project with an onslaught of witty bars that listeners will be untangling through each listen.

With all original production and a feature from Kevin Gates on “Goonies,” Fire In The Church is a giant leap into a more conventional direction for Montana Of 300, who has time-and-time again proven his ability to go bar-for-bar with the genres best rappers. A knack for dismantling popular industry hits and piercing them with his FGE (Fly Guy Entertainment) flag, Montana Of 300 recently tackled Desiigner‘s chart-topping “Panda” single with fervor, foregoing Brooklyn-bred wunderkind’s percussive triplet flow in favor of his own machine gun bursts of lyrical genius. Having surpassed 2 million YouTube with an additional 750+ thousand SoundCloud streams, the “Panda” remix video is another viral success for the artist that Noisey labeled “a star for a post-media era.”

Hailing from Chicago’s Southside, Montana Of 300 adopted the Rap God alias to represent both his status in the genre and his faith. “I felt like I could possibly be the best rapper that ever rapped,” he toldPassion of the Weiss of an early intuition, adding “I got me, I got my brain, and I got God. My lyrics is way more potent than everybody else that’s out right now.” A 2016 XXL Freshmen nominee, Montana Of 300 recently spoke with Fuse‘s FM TV detailing his experience meeting with Kanye West and Rick Rubin, telling fans to “expect the unexpected.” 18 months since the release of his 2014 break-through project Cursed With a Blessing, Montana Of 300’s Fire in the Church is now available and releases alongside the “FGE Cypher Pt. 2” video.

Stream Fire in the Church: https://open.spotify.com/album/1MLItjiDpjvAeZC9NeWK87 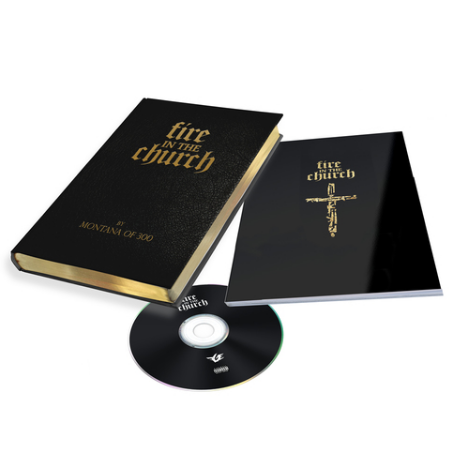 “Land Of The Dark”: http://youtu.be/ZE1o4cnITFY