If by some slim chance you’re not in the know, Montana Of 300 has made a habit of turning other artist’s beats into his own. Post Malone‘s wavy break-out single “White Iverson” and 2 Milly‘s street anthem “Milly Rock” are the latest victims of the Chicago rapper’s on-going series of remix videos, which have combined for more than 60 Million YouTube views from fans that eagerly anticipate each release – the“White Iverson” x “Milly Rock” remix video was released just over an hour ago and quickly coasted to more than 30K views and 3K likes, with hundreds of comments singing the self-proclaimed Rap God’s praises. Paired back-to-back as an 8-minute clip, the punchlines and metaphors are relentless and if you’re listening close enough you’ll be tapping rewind every few bars in an attempt to keep up with the onslaught of double entendres.

Montana Of 300 also used the “White Iverson” x “Milly Rock” remix to announce the May 6th release date of his Fire in the Church album, the follow-up to 2014’s break-through project Cursed With a Blessing. This past December 2nd, Montana Of 300 celebrated the one year anniversary of Cursed With a Blessing when he shared Gunz N Roses, a collaborative full-length with long-time compadre Talley Of 300. The effort also introduced several other members of Montana Of 300’s FGE crew, R&B singer Jalyn Sanders and budding Illinois rappers $avage and No Fatigue, who proved to be forces of their own with remoreseless verses on crew cut “FGE Cypher.” While news of Montana Of 300’s studio session withRick Rubin, Russell Simmons, and Kanye West circulated over the past Summer, with speculation of a bidding war reaching it’s peak, it appears for now that Montana Of 300 is determined to continue paving his own lane as an independent artist while developing an army of youthful talent to surround him.

Montana Of 300 tour dates:
Montana Of 300 is on tour this month, and will be making his New York City debut with a headlining show at the Highline Ballroom on Jan. 29th. 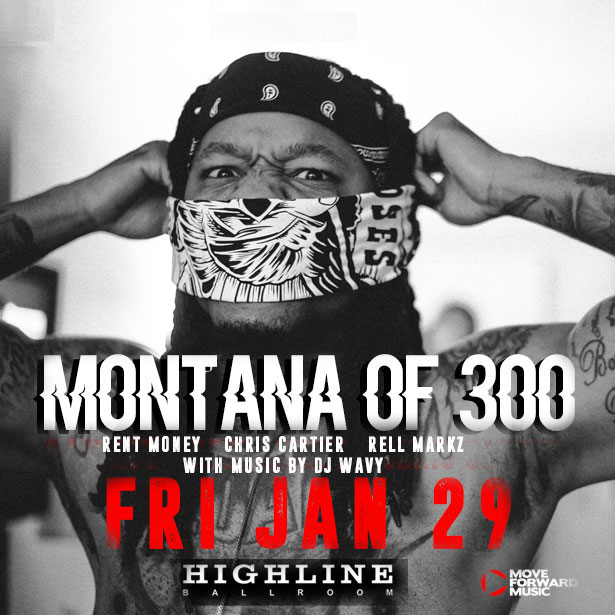