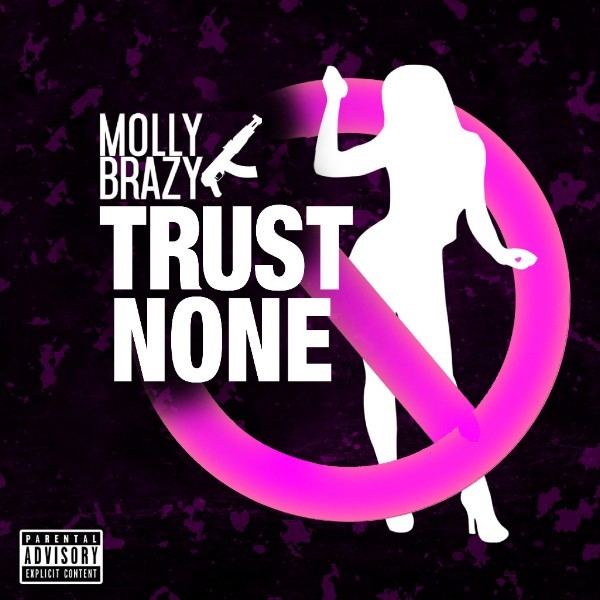 A ferocious young rapper who skillfully transforms tough-talking mantras into infectious hooks, Molly Brazy is the next Detroit rapper to cross into the mainstream. Mean-mugging over a bass-heavy production from Go Grizzly and Pooh Beatz, Molly flexes several flows on “Trust None,” her latest single. Only 18-years-old but steeped in the culture of the streets, Molly speaks out against snitches and snakes on the new single, taking some time to salute her brother, currently in prison. Premiered by Hypebeast, “Trust None” is the latest single from Big Brazy, Molly’s next project and the follow-up to January’s Molly World, which XXL called “one of the hardest tapes of the year so far.” With diverse and infectious production from the likes of Go Grizzly, Pooh Beatz, Rocaine, Deaf Beatz and others, the concise, hit-packed Big Brazy arrives on December 8th.

Praised by XXL as “one of the dopest rappers coming out of Detroit,” Molly Brazy gained notoriety by uploading freestyle videos to Instagram, ballooning her presence to over 715,000 followers. With an additional 265k likes on Facebook, 65k followers on Twitter, and 36.6k likes on SoundCloud, Molly Brazy has become a social media sensation for her rapping prowess. In her short career, Molly Brazy has already collaborated with some of the most significant figures in Detroit rap, including BandGang, RJ Lamont, Rocaine, and many others. Watch out for Big Brazy, featuring singles such as “Pop Shit” and the title track, the video for which received a WorldStarHipHop premiere, releasing later this year.

Listen to “Trust None”: https://soundcloud.com/mollybrazy/trust-none

Check out the Hypebeast premiere: https://hypebeast.com/2017/11/molly-brazy-trust-none-stream