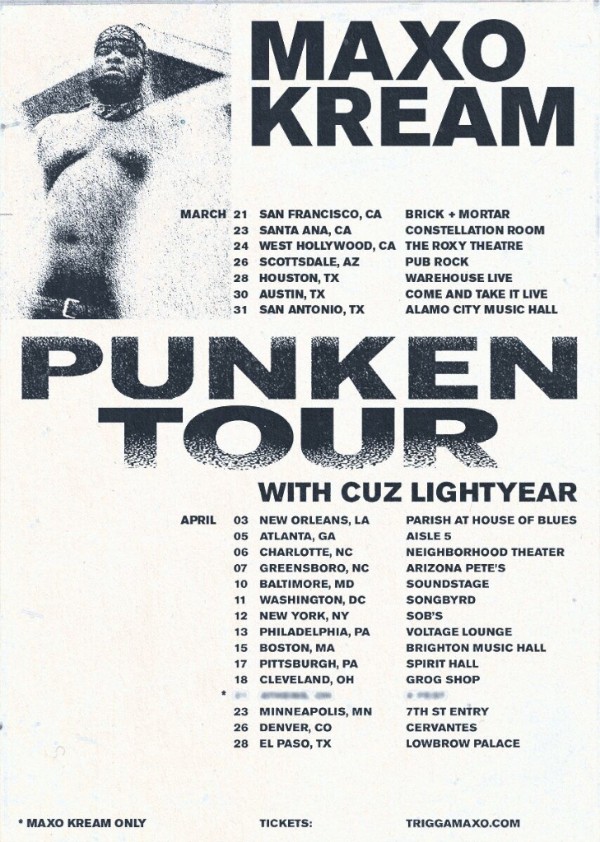 In January, Maxo Kream delivered his stunning debut independent album, Punken, which Pitchfork praised as “full of unsparing storytelling, pusher anthems, and a dynamic array of trap production over which Maxo delivers some of his most effective writing.” Today, the Houston emcee is announcing the nationwide Punken Tour, kicking off on March 21st in San Francisco with a total of 21 stops supported by Cuz Lightyear. Tickets will be available on Maxo Kream’s website starting Friday, February 9th.

Maxo Kream broke out in 2015 with the haunting street epic Maxo 187, earning critical praise and winning a cult following. He turned even more heads in 2016 with Persona Tape, his second full-length which featured Paul Wall, Playboi Carti, Key! and Rich the Kid. In 2017, Maxo released some of his best and most successful singles, including the OVO Sound Radio-premiered, Lil Uzi Vert-featuring “Mars,” and “5200,” which spent a few weeks on Spotify’s Most Necessary. Maxo also impressed on the live circuit last year, performing at Rolling Loud Bay Area and starring in Spotify’s Rap Caviar Houston live showcase. With Punken, Maxo solidifies his street credentials and cements himself as an important emcee for the present and future.

Buy Tickets to the Punken Tour, on sale Friday 2/9: http://www.triggamaxo.com/

Buy Tickets to the Punken Tour, on sale Friday 2/9: http://www.triggamaxo.com/