The Carbon Fiber Music Signee Looks to Make A Name for Himself With Debut 10-Track Project, Featuring Appearances from CJ, Farruko, and Mavado 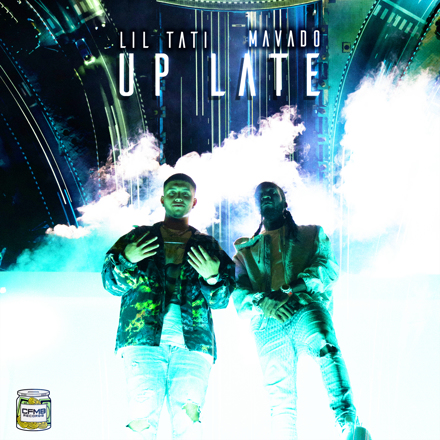 Florida-born newcomer, Lil Tati blends flirty R&B with bass heavy beats while bearing his heart through his lyrics. Looking to make waves with his first big step into the limelight, Lil Tati announces NiNET33N, his 10-track debut album. The number 19 has a profound significance in Tati’s life, leading him to make it the title of his new project, a work that has been years in the making. Giving it even more meaning, 19 is also Tati’s age, and the age that his father was when Tati was born. Soon to be available for pre-save/pre-order, NiNET33N arrives on November 19 via CFMG Billionaires, the English-speaking arm of Carbon Fiber Music.

“I like to describe NiNET33N as ten songs with all different sounds,” Tati explains of his debut. “Not everybody likes rap, and not everybody likes R&B, so I’m just giving you everything.” Further demonstrating his versatility, Tati is joined by Drill rapper CJ on the cut “Came Up.” Carbon Fiber co-founder Farruko provides a verse in Spanish on the radio-ready “She Got It,” while Tati shines solo on the banger “Blah Blah Blah” about “teenage toxic love,” as he puts it. The project has all of the young adulthood. “19 is an important year in my life,” Tati says. “I feel like I’m growing up now and my project is proof of that.”

Along with the announcement of the album, Tati shares “Up Late,” a new video single featuring dancehall legend Mavado. “I know Mavado doesn’t collaborate with just anybody, so I was so honored to have him on my track,” Tati expresses. The track brings a combination of Tati’s knack for R&B with Mavado’s Jamaican-rooted signature sound, creating an unstoppable pair. Utilizing his casual bravado, Tati toys with the idea of a late night meetup in the chorus singing “I’m up late yeah I’m up late / I’ve been sipping on some Hennessy so baby tell me what would you say if I invited you over.”

Music has always dominated Tati’s life, before he was even making it himself. He watched his father, Franklin Martinez aka Frank Miami, go from cutting hair at a barber shop in the well-known USA Flea Market (Liberty City) to managing then-bubbling acts Farruko and Lary Over to later forming Carbon Fiber Music in 2014. The label is a Latin music powerhouse, home to the aforementioned acts, along with a number of heavy hitting artists and producers. While it’s inevitably a new era for Carbon Fiber Music as it extends its English-speaking-focused Billionaire arm, it’s a new era for Lil Tati as well. He is an extension of a legacy that has been cultivated over the last decade, only now he is a part of it on his own terms with his own sound. “My goal really is to just be heard,” he says matter-of-factly. “I know I’m the new kid, so I just want people to listen to my music and remember my name.”

As Lil Tati makes way for his big introduction with NiNET33N, the stars are aligned for this undeniable talent, and he’s only just getting started. Stay tuned for much more.