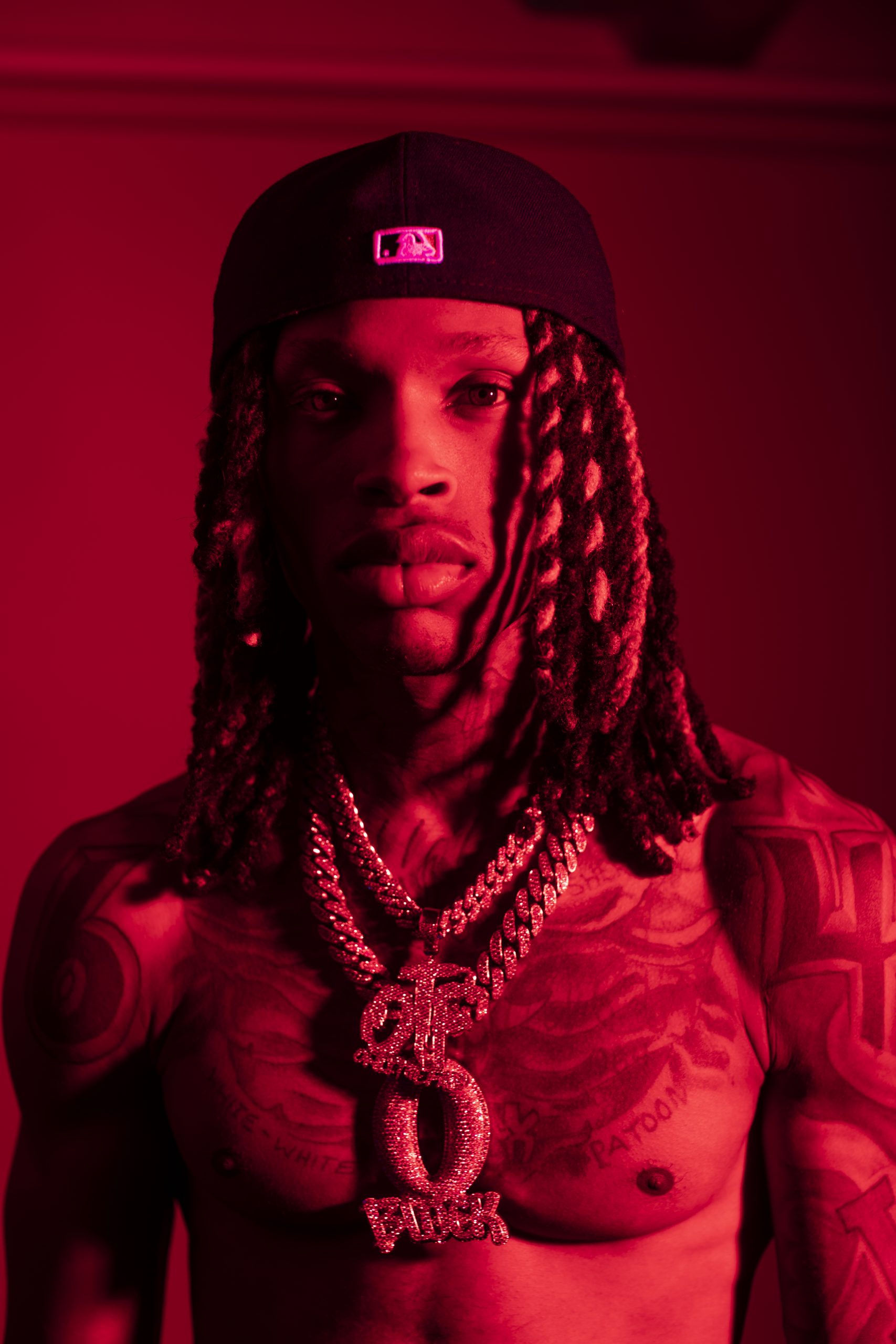 Relaying street stories with a painter’s eye for detail and a playwright’s sense of drama, King Von is one of the rap game’s most vital voices. Offering up an unfiltered and breathlessly intense portrait of his come-up, King Von shares Welcome To O-Block, his debut album and origin story. Shaped by his upbringing in his notorious home neighborhood and by his lifelong experiences with the criminal justice system, Von delivers his rhymes with a single-minded energy, laying out the life-or-death stakes of his day-to-day as a rising rap star. The 25-year-old rapper interrogates every corner of his state of mind, revealing the earned confidence and residual paranoia of a man determined to overcome his demons, reach stardom, and provide for his friends and family.

Featuring production from Von’s frequent collaborator Chopsquad DJ alongside famous faces like Wheezy, Tay Keith, Hitmaka, and Will-A-Fool, Welcome To O-Block incorporates regional sounds from around the map into Von’s dramatic post-drill sound. The rapper reaches a new level of craftsmanship as he covers conflicts and situations familiar to anyone who grew up in a neglected urban environment. Setting the scene with opening track “Armed & Dangerous,” Welcome To O-Block finds Von lamenting a friend’s betrayal on “Why He Told“ (6.9 million YouTube views) and contemplating the harsh decisions faced by people caught up in the justice system on  “How It Go“ (8.3 million views). Showing his versatility, Von reflects on his sins and shows off his melodic abilities on “Demon,” and works through relationship woes on “Mad At You,” a duet with fellow Chicagoan Dreezy.

The new project is home to buzzing new singles like the Brooklyn-meets-Chicago anthem “I Am What I Am” ft. Fivio Foreign (7.2 million views), the lightning-quick home invasion tale “Gleesh Place“ (2.4 million views), and the furious breakout hit “All These N****s” (24.5 million views), featuring his mentor and close friend Lil Durk. Featuring additional appearances from Polo G, Moneybagg Yo, and Prince Dre, Welcome To O-Block is available everywhere via Only The Family/EMPIRE.

Welcome To O-Block is the follow-up to Levon James, a wide-ranging and successful project, home to the hit single “Took Her To The O“ (27 million views). The culmination of a meteoric rise that started with 2018’s “Crazy Story,” Welcome To O-Block establishes Von as one of his city’s, and the rap game’s most promising new stars. 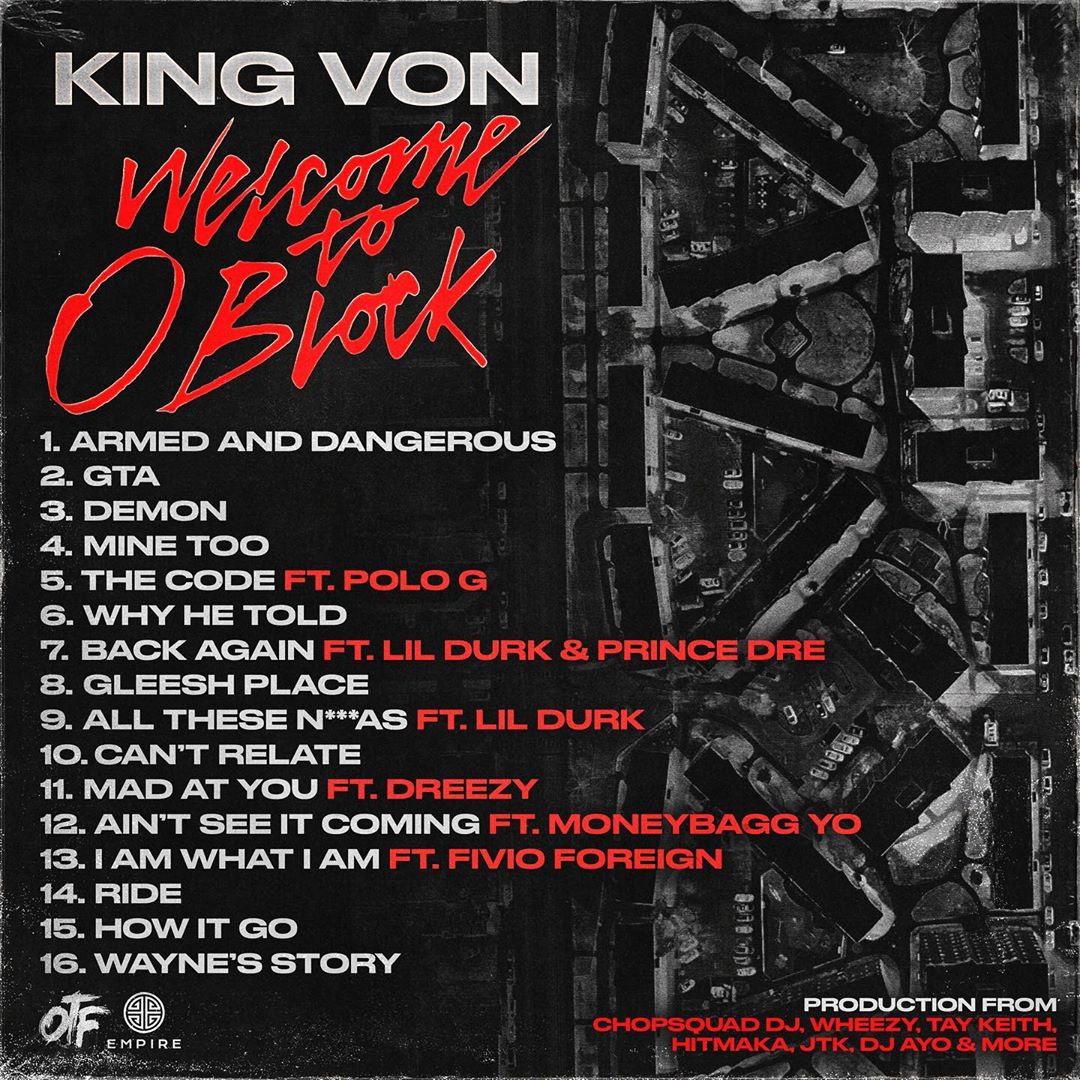 King Von is one of rap’s most visceral and animated storytellers, packing detail and wit into every bar. Making noise in a big way following acquittal from a potential prison sentence, the Lil Durk co-signee earned over 50 million plays on his Gold-certified single “Crazy Story,” and sustained his momentum with the Grandson Vol. 1 mixtape. Von shared his ferocious album LeVon James in March, which featured the fiery single “Took Her To The O” (27 million views). His debut album, Welcome To O-Block, a harrowing and inspiring origin story, features appearances from Polo G, Fivio Foreign, Moneybagg Yo, and more, and is currently available via Only The Family/EMPIRE.