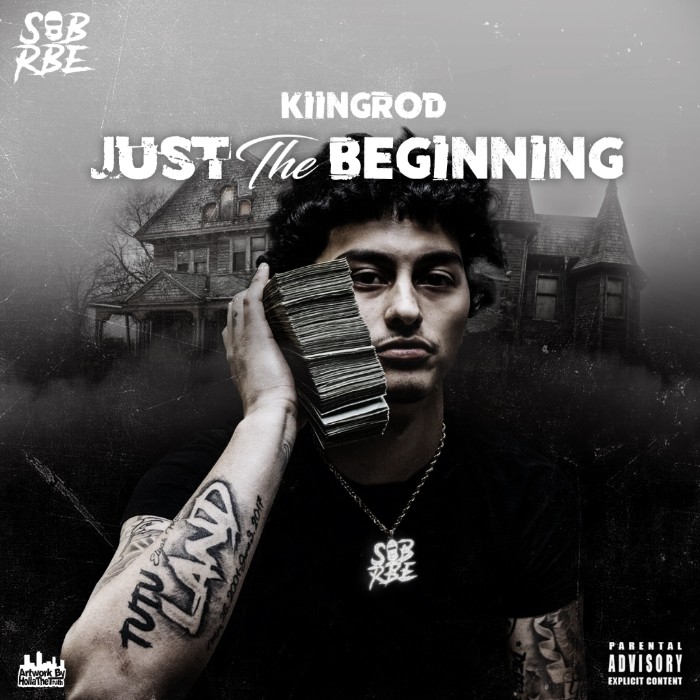 With an irrepressible, speaker-knocking energy and a facility with threatening punchlines, Vallejo’s KiingRod has a long career ahead of him. Collecting ten hard-hitting tracks into an aspirational full-length, KiingRod shares Just The Beginning, a new mixtape. Rocking a breathless delivery over glistening post-hyphy beats, the SOB X RBE affiliate flashes huge potential, creating mob music with genuine emotion that explores the contrast between his rough childhood and flex-heavy present. Distributed by EMPIRE and premiered by Daily Chiefers, Just The Beginning features previously released highlights such as the deliriously condescending “Bank Roll,” which boasts a standout verse from YBN Nahmir, and the infectious “Viral,” featuring Sick Wid It Records’ JT The 4th. With additional appearances from Yhung T.O. & DaBoii of SOB X RBE, Lil Sheik, Flexcity Streetz, Lil Noonie, and Kbgocrazy, Just The Beginning is a compact set of slappers that helps KiingRod standout in the crowded landscape of Bay Area rap.

Born and raised in Vallejo, CA, KiingRod is an exciting new talent in the region. Growing up, Rod lived in the same neighborhood as DaBoii of SOB X RBE, where they became fast friends and taught each other how to rhyme. Both rappers have a breathless delivery, giving the effect that they will jump out of your speakers into your living room if you talk shit. In 2016, KiingRod struck gold with “Knockdown,” a bouncy and intimidating collaboration with rapper Mike Sherm that earned over 6 million views on YouTube. KiingRod parlayed the momentum from that single into Rags To Riches, the young rapper’s debut mixtape, which featured an appearance from Philthy Rich and yielded the hit song “Rampage,” which garnered five million views. With his SOB X RBE brethren at his back, KiingRod is ready to hit the big time with Just The Beginning.