Video: Key Glock – “Bottom Of The Pot” (Prod. by Bandplay)

The Memphis Street Savior Shares the Latest Video from Glockoma, His Late 2018 Mixtape 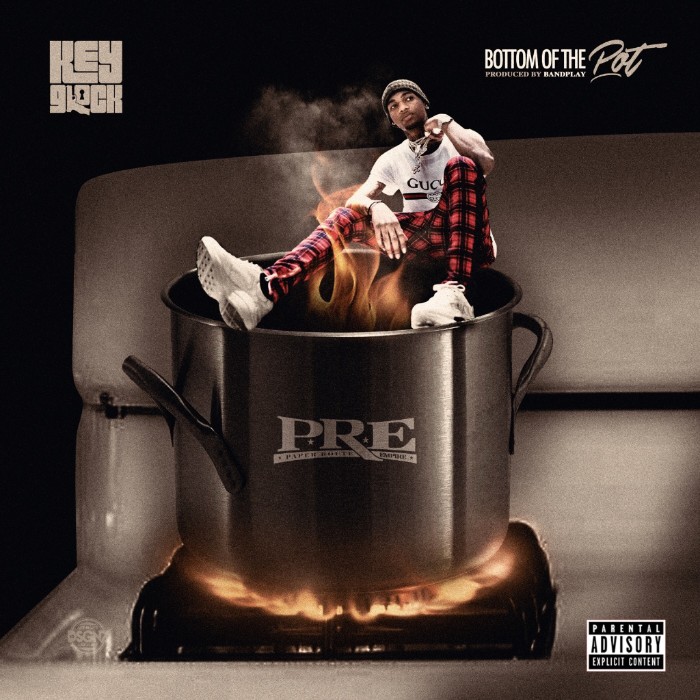 With an independent hustle that rivals any in the game, Key Glock enters 2019 on a cresting wave of popularity. Showing off his boisterous wordplay Glock shares “Bottom Of The Pot,” his latest music video. With swirling synths and crisp drums courtesy of BandPlay, “Bottom of the Pot” highlights Glock‘s creative vocal ability, feverishly whispering the final word of each line in the hook, cleverly accenting the beat’s snare placement. Glock’s delivery helps bring out the best in his bars, which are as outrageous as usual: “It’s a bird, it’s a plane/ Nah bitch that’s Glock!” In the video, Glock counts his cash as he cooks up work, shrinking down to dance on a stovetop with a scantily clad model. “Bottom Of The Pot” follows the release of Glock’s previous video “Since 6ix,” which has 6.2 million views on YouTube, and lead single “Yea!!,” a monstrous banger produced by Drake‘s favorite new producer Tay Keith, which has over 4.1 million plays on Spotify alone.

Running roughshod over trunk-rattling instrumentals from Tay Keith, Bandplay, Buddah Bless, The Honorable C-Note, and others, Glock ratchets up his energy level on Glockoma (Paper Route EMPIRE), enthusiastically shouting blunt force punchlines about his extravagant wealth and street bonafides. Ranging from the laid-back cocktail lounge-inflections of “Gang Shit No Lame Shit,” to the minimalist, droning bass of “Walking Ticket,” Glockoma refines and expands Glock’s sonic palette, providing a canvas for Glock to paint on with quotable stunts like “My bankroll enormous, just like Norbit,” or “I need a house so big the den got a den,” (both lyrics from mixtape highlight “Talk My Shit”). The follow-up to February’s swaggering Glock Bond, Glockomaprovides the groundwork for him to become a household name.

With Glockoma and Glock Bond, Key Glock proved his mettle as one of rap’s most consistent rising stars in 2018. Emerging out from the shadow of his mentor Young Dolph, Glock is a street stalwart, generating millions of streams without the benefit of radio play. Featuring the Tay Keith-produced hit “Russian Cream,” which has over 40 million streams on all platforms, Glock burst out of the gate early in the year with Glock Bond, earning more than 48 million streams on Spotify alone. On Black Friday, Key Glock dropped Glockoma, a 14-track effort with no features, earning 16.8 million Spotify streams and propelling his monthly listener count to 1.9 million. “Key Glock knows that he could use big features and producers to get noticed,” said Passion Of The Weisswhen they named “Cocky” as the 30th best rap song of 2018. “Instead, he chose to claw his way to the top by showing off his own talent and creativity. You get the sense that he doesn’t want anyone to distract you from him.” Reigning as one of rap’s top regional stars, Key Glock is 2019’s next Southern superstar, rising out of Memphis to take over the world.

Watch “Bottom of the Pot”: https://www.youtube.com/watch?v=e4Iqe9xjfPc

“Bottom of the Pot”: https://www.youtube.com/watch?v=e4Iqe9xjfPc