The 21 Year-Old Chicago-bred Taylor Gang Rapper Teams Up With Producer Sledgren For a Hazy, Hypnotic EP 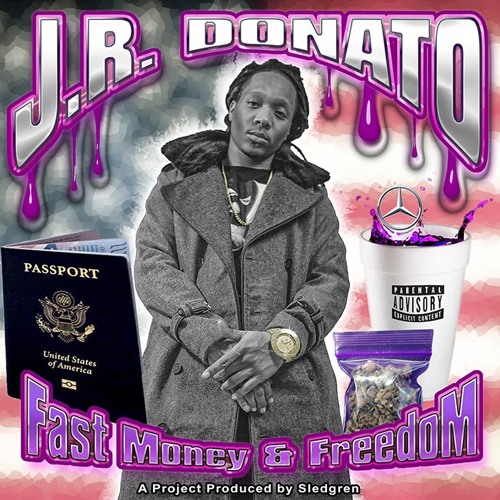 On Fast Money & Freedom, Taylor Gang rapper J.R. Donato revisits his roots in Chicago and propels himself forward as a buzz-worthy new artist. While 2014’s North Pole found Donato teaming up with Wiz Khalifa, Ab-Soul, and Iamsu!, Fast Money & Freedom symbolizes a coming of age for the rapper. “In Chicago, Fast Money & Freedom is the perfect way to describe how we look at life at 17, 18 years old,” he explains. “A lot of people drop out of school because they can’t go to school without getting into a fight that’s gonna lead to a shootout. So motherfuckers end up focusing on other ways they can feed their family. That’s our mindstate here: fast money and freedom. We can’t think about college and all that slow motion shit. We gotta get it right now.”

In the lead-up to 21-year-old J.R. Donato’s Fast Money & Freedom EP, the North Chicago rapper has shared a series of singles. “I Suppose” found Donato couch-surfing through the Chi, while he partied with some friends in the carefree video for “Life So Sweet.” Additionally, audio singles “Make It Count” and “Mad At Me” showcased Donato embracing the opportunities that he’s encountered in his nearly ten year rap career while paying no mind to the people that’ve hated along the way. Produced in-full by Sledgren, Fast Money & Freedom has a consistently hazy, laid back vibe that matches Donato’s breezy, charismatic presence on the mic.

Rapping since the age of 13, J.R. Donato started off early with his regional hit “500 Degrees.” Still, his peers didn’t take him very seriously as he was distributing CD’s of his music at school – finding the music he worked to make on the floor or in the garbage didn’t deter his ambitions, rather it pushed him to take things a few steps further. Donato had been taken under the wing of Chi-Town legend Twista, who embarked on a regional high school tour that gave a teen-aged Donato his first platform to perform. After mentoring from Twista, the rapper that garnered attention for rapping over Lil Wayne beats was coming into his own. He soon crossed paths with Wiz Khalifa back stage on the Under the Influence Tour. Wiz later enlisted J.R. for a feature on his Cabin Fever 2 mixtape before signing him to Taylor Gang Ent. Now with eight years under his belt, Donato is primed for a break-out.

Purchase the EP on iTunes: smarturl.it/fastmoneyandfreedom