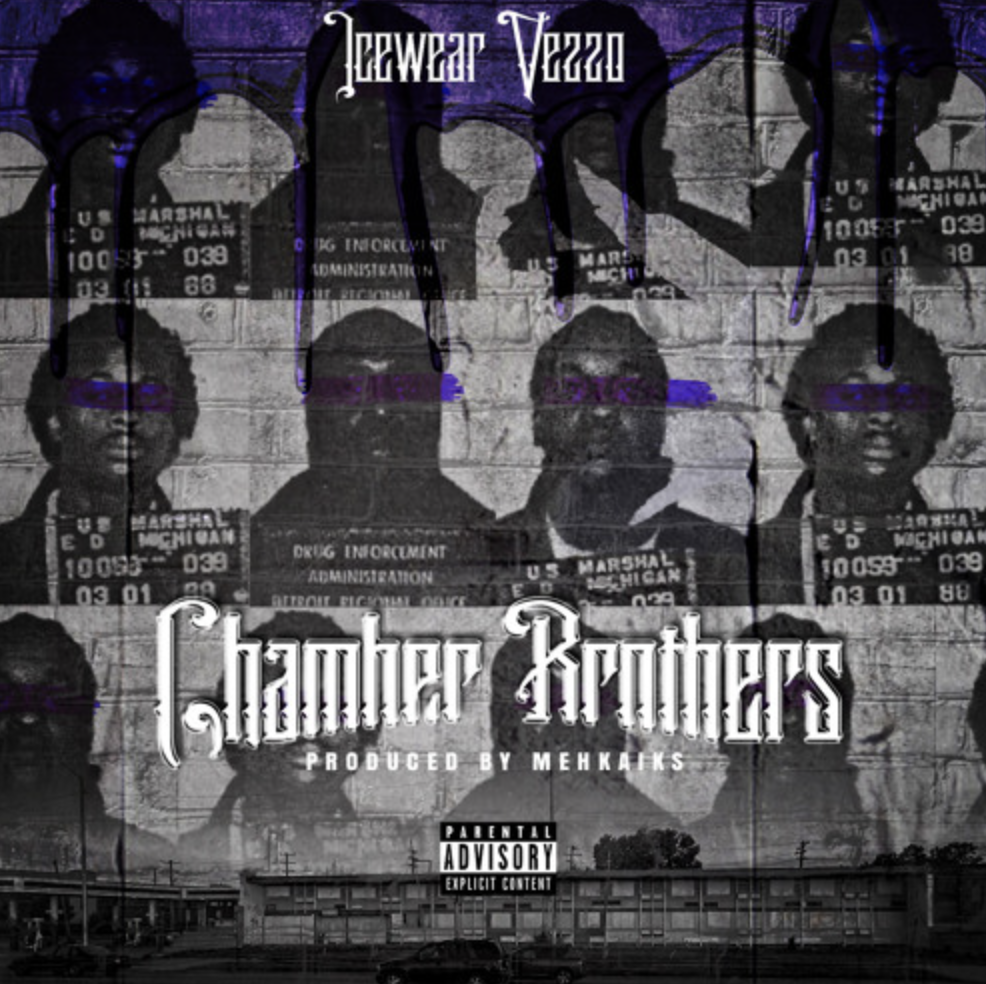 A professional hustler with the rhyming skills to back up his bluster, Icewear Vezzo is a quintessential connector in the Detroit scene. Giving a Motor City history lesson over a Bay Area beat, Vezzo shares “Chamber Brothers,” his latest video single. Produced by The Mekanix, the legendary Oakland duo known for their glistening mob music instrumentals, “Chamber Brothers” furthers the deep connection between Detroit and the Bay, and Vezzo’s conversational drawl perfectly blends with the slinking bass and echoing synths. Referencing the Chamber Brothers, a notorious crew that ran Vezzo’s 6 Mile neighborhood in the 1980s, the new song finds Vezzo in an aggressive mood: “AR heavy on my shoulder, gotta aim this f*cker/Selling crack like it’s the ’80s, we’re the Chamber Brothers/Everything I got is profit, I came with nothin/30 round poking out the glock, like it hang on something.” In the video, directed by Boomin Filmz, Vezzo and his Iced Up Records associates spin the block in their foreign cars, each car with different colored rims, as Vezzo establishes his hustling bonafides.

“Chamber Brothers” is the latest song from Rich Off Pints 2, Vezzo’s upcoming project. The sequel to Vezzo’s successful recent mixtape Rich Off Pints, ROP 2 explores Vezzo’s status as a pillar of the flourishing Michigan rap scene, and how he hustled out the mud to become a thriving artist and entrepreneur. Following in the wake of high profile collaborations with the likes of Future and Lil Durk, the latter on the single “Up The Scoe” (over 12 million views), ROP 2 arrives on September 3rd via Iced Up Records/Active Mindz Ent.

Released in May and praised by Pitchfork, Rich Off Pints is home to introspective highlights like  “Still With Me” (“Used to have sh*t to live for, now I have plenty reasons,” spits Vezzo on the track), and hard-hitting bangers like “Choppy Talk” and “Kobe Bryant” ft. EST Gee. The 16-track effort charted on the Billboard Heatseekers chart, and propelled the artist to #9 on Rolling Stone’s Breakthrough 25. With additional appearances from respected names like Trippie Redd, Lil Yachty, Dreezy, BIG 30, and more, Rich Off Pints tells Vezzo’s story while paying tribute to a Detroit scene he helped foster.

Promising a further exploration of his sound and even more high-profile collaborations, Rich Off Pints 2 continues Vezzo’s climb from from street-savvy striver to pillar of his community. Stay tuned for more music and more high profile collabs from Vezzo in the coming weeks.