Atlanta’s Hoodrich Pablo Juan is primed to take over the South with his hypnotic flow and soft-spoken delivery. Rhyming in an addictive cadence above a creeping, downtempo trap instrumental, Pablo Juan matter-of-factly touts his boss lifestyle on “Money On Fleek.” Dotted by kinetic illustrations and borrowing the “wanted star system” from Grand Theft Auto, which tracks your illegal activity, “Money On Fleek” is a stylish depiction of HPJ’s day-to-day, finding the young rapper smoking on gelato, drinking lean, toting guns, and grooming his beard in the barber shop. Premiered by XXL, “Money On Fleek” is the first video from Rich Hood, Hoodrich Pablo Juan’s latest mixtape. Hosted by DJ Scream and DJ Champ and featuring appearances from Lil Yachty, Lil Baby, Gunna, Key Glock, among others, Rich Hood rings in the new year with 14 trap bangers.

Explains Hoodrich Pablo Juan, “I like my money neat, no flex. Ask anybody who know Hoodrich: I’m addicted and obsessed with getting money, saving the neat ones spending the ugly💲. My plan for 2018 is to take over the world ear by ear. I plan on having more influence than Martin Luther King Jr. Hoodrich 💲🔌🔫  the religion! Shout out to my big brother WOP la Flare.”

Praised by Stereogum as “Atlanta’s Next Up,” Hoodrich Pablo Juan spent 2017 building buzz and releasing some of his most popular and critically acclaimed music yet. In October, HPJ released  Designer Drugz 3, which had the emcee holding his own with some of the most accomplished members of ATL’s A-List. Featuring Gucci Mane, Lil Uzi Vert, Lil Yachty, Migos, MadeinTYO, Playboi Carti, Chief Keef, TK Kravitz, and others, along with production from Metro Boomin, Zaytoven, Nard & B, Cassius Jay, DJ Spinz, Honorable C-Note and more, Designer Drugz 3 is a non-stop collection of trap bangers, with Pablo Juan anchoring the album with his understated charisma and creative flows. Starting with Rich Hood and continuing with even more music from the prolific emcee, 2018 will be a big year for Hoodrich Pablo Juan.

Check out the XXL premiere: http://www.xxlmag.com/video/2018/01/hoodrich-pablo-juan-money-on-fleek-video/ 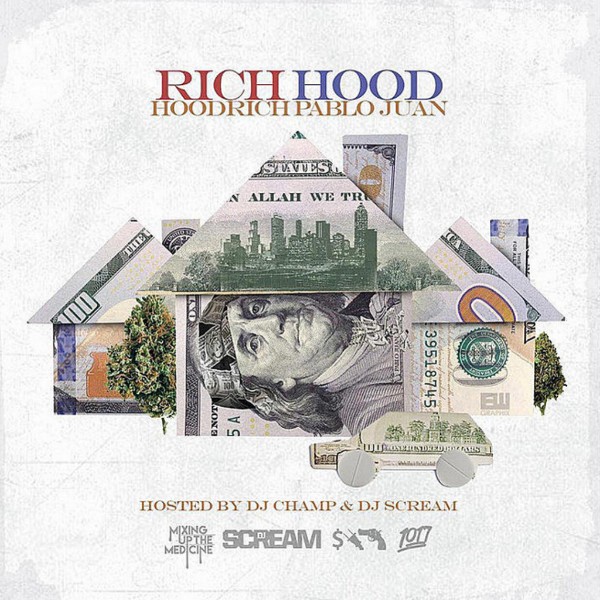