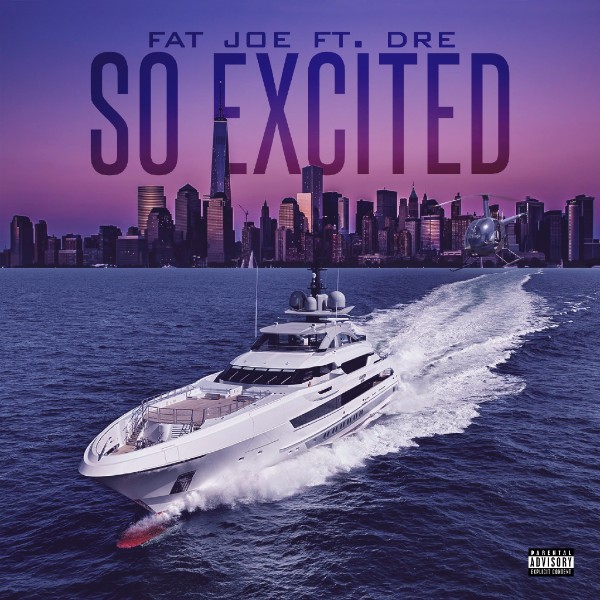 With summer in full swing, Fat Joe is delivering “So Excited,” a boastful banger primed for yacht speakers. Featuring production from Streetrunner and vocals from “All The Way Up” and Plata O Plomo co-producer Dre, “So Excited” has the artists celebrating life and hyping up their baddies; the ones who deserve the finest Fendi and lavish lifestyles. Dre sings an infectious hook while Fat Joe spits about finding a real one, “Bitch so bad I could risk it all/ If you don’t want no problems don’t get involved/ Now everything ain’t Gucci this a different store/ I’m about to get Carmelo boy and risk it all.”

Fat Joe previously dropped the Carribbean-tinged “Heartbreak” with partner-in-crime Remy Ma, which clocked over 3 million plays and 3,000 downloads on all formats before the video even dropped. Longtime friends and collaborators since the 1990s, Fat Joe and Remy Ma catapulted New York rap back into the mainstream in the past year with their collaborative album, Plata O Plomo. The project boasted guest appearances from French Montana, The-Dream, Ty Dolla $ign, Kent Jones, BJ The Chicago Kid, Sevyn Streeter, and more.

Plata O Plomo‘s lead single, “All The Way Up,” was certified platinum by the RIAA, while earning official remixes featuring JAY Z, David Guetta, Snoop Dogg, The Game & E-40 alongside having ad placements in the trailer for XXX 3 and ESPN‘s NFL Sunday Countdown. The track earned Fat Joe and Remy Ma two BET Hip-Hop Awards, the Rhythm and Bars Award at the Soul Train Awards, and GRAMMY Award nominations for Best Rap Performance and Best Rap Song. A culmination of an epic comeback by the two Bronx-born veterans, Plata O Plomo has re-solidified New York’s rightful place in rap: the top of the game.