October 29, 2021 (Miami, FL) – Latin music’s most versatile and experimental artist, Farruko, continues to make history with the release of his PEPAS EP which sees him enlisting the help of top-selling globally acclaimed DJs David Guetta, Tiësto, Steve Aoki, Robin Schulz, and Benny Benassi. The songs are available to stream on all digital platforms today.

With the bundle, fans of the performer will see what happens when some of the world’s most critically acclaimed and esteemed DJs put their individual spins on the genre’s most ineffaceable song at the moment. Since its debut, “PEPAS” has encountered monumental successes having charted No. 1 on Billboard’s “Hot Dance/Electronic Songs” (8 weeks in the top spot), “Hot Latin Songs,” “Dance/Electronic Digital Song Sales,” “Dance/Electronic Streaming Songs,” and “Latin Digital Song Sales” charts. The song was listed at No. 29 on Billboard’s Hot 100, currently ranks at No. 5 on Spotify’s Global Top 50 chart, and has over 358 million total streams (it has well over 154 million views on YouTube alone) and over 3 million daily streams. Just yesterday, Farruko hit another milestone with “PEPAS” and was nominated for the 2021 American Music Awards in the “Favorite Latin Song” category. “PEPAS” continues to establish itself as a massive Latin crossover hit with Farruko’s late-night TV debut performance on The Tonight Show Starring Jimmy Fallon. Sony Music Latin and Carbon Fiber Music have also awarded the performer with commemorative plaques celebrating the song’s global success and the myriad of certifications it has received: Platinum in Argentina, Chile, Colombia, and Mexico; CAC Platinum + Gold; 2X Platinum in Peru; 3X Platinum in Spain; Gold in Italy, Switzerland, and the Netherlands; and 8X Platinum in the United States.

“Having all of these globally renowned DJs produce their own remix version of  Pepas is a testament that music is universal. When I recorded this song I knew it was going to be good, but in the manner that it has impacted around the world and people from all walks of life is really something incredible. Grateful for all the support, and especially from these DJs who have played the song in front of thousands of fans and stages all over the world!” notes Farruko

“When I first heard Pepas, I knew it was a special record. The melody on it is absolutely extraordinary. It was the first thing I noticed, and I just knew I needed to put my spin on it. This is the second time Farruko & I have collaborated together, and I’m thrilled to be working with him again putting a huge Aoki style drop on this massive hit,” commented Steve Aoki .

“With my team of producers, we were working on a mash-up idea. It’s such an irresistible track, I wanted to bring into my musical world and give it a slightly darker, clubbier spin. Hey, clubbing is back, and we need this track in that space! I’m thrilled that what started as a mash-up dj tool idea has become an official remix. Muchas Gracias, Farruko!” expressed Benny Benassi.

The Puerto Rican multi-Platinum selling artist’s success doesn’t end with “PEPAS” as his recently released album LA 167 has also debuted at No. 1 on Billboard’s Top Latin Albums chart. For this album, Farruko felt inspired by the nostalgia of his youth and named the album after the main highway that runs through his hometown of Bayamón, PR. Staying true to his nonconformist approach to music, LA 167 fuses and embodies the eclectic subcultures and genres that have inspired the singer-songwriter throughout his career. As an ode to both Puerto Rico and his late grandfather, the album is nostalgic, festive, vulnerable, and full of pride for the Urbano pioneer’s heritage. LA 167 features 25 expansive and unrivaled tracks that coalesce perreo beats, “pilita” (the EDM sounds popularized by the Dominican Republic), and reggae.

Farruko’s hit anthem “La Tóxica” also finds a home on the new album. “La Tóxica” debuted in the top 10 of  Billboard’s “Latin Digital Song Sales” list, in the top 15 of “Hot Latin Songs,” peaked at No. 1 in nine countries, No. 1 on Billboard’s Hot Latin Songs and Latin Streaming Songs, and scored him a 2021 Latin GRAMMY® nomination in the “Best Reggaeton Performance” category. Most recently the singer-songwriter released the video for his song “El Incomprendido” with Victor Cardenas and Dj Adoni. The EDM-inflected banger interjects the iconic 1999 Eurodance sound of the classic “Better Off Alone” by Alice Deejay and has amassed over 15.42 million YouTube views. The album also sees Farruko team up with Ñengo Flow, Myke Towers, Jay Wheeler, Brray, Secreto, Noriel, Luar, White Star, India Martinez, Lenier, Jamaican dancehall singer Mavado, and repeat collaborator Pedro Capó, who worked with the performer in 2019 for the 25x Platinum hit “Calma.” Next month Farruko will kick off his first US Tour that will make stops in 15 cities. He hit a career milestone and made history by selling out Puerto Rico’s renowned Coliseo arena during a presale for 2 nights for his upcoming homecoming shows of  “LA 167 Tour.” 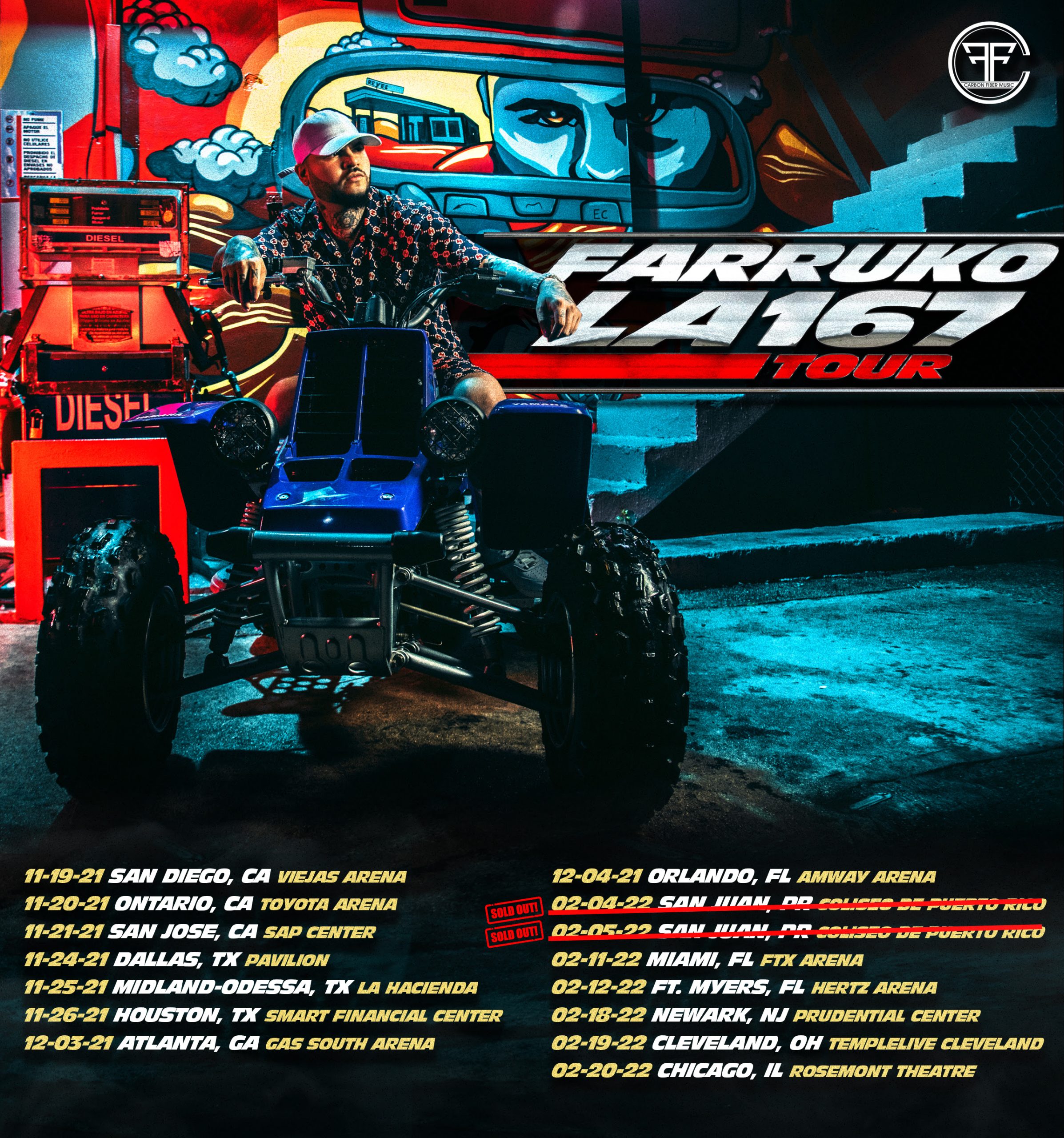