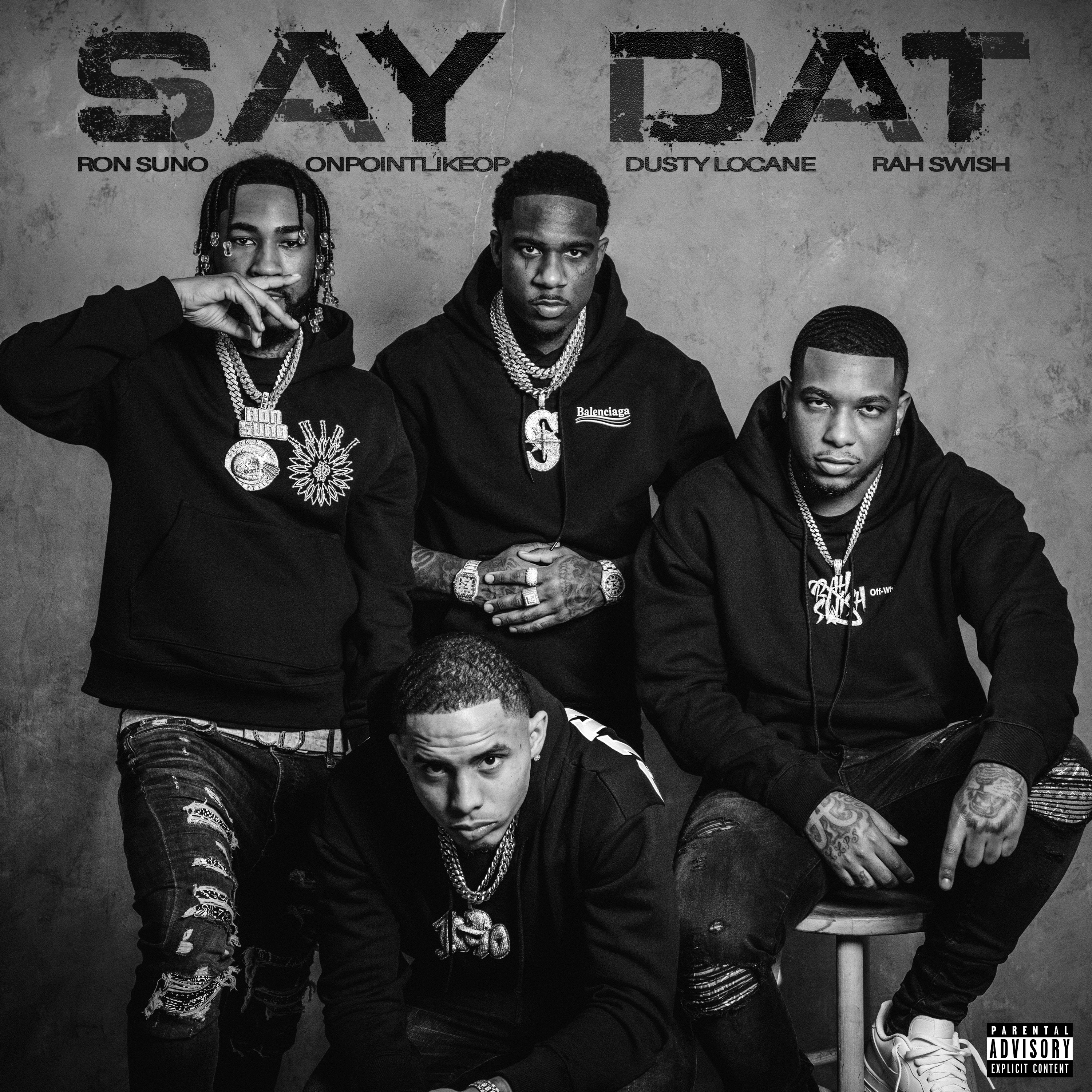 “Taking a quality-over-quantity approach, every song on the project stands tall, with the introductory ‘ANGELS AND DEMONS’ giving each rapper room to prove their chops.” – Billboard

Drill is the sound of the Empire State, powered by a colorful cast of characters from Brooklyn and The Bronx. Providing a unified front in a sometimes fractious scene, rappers DUSTY LOCANE, Ron Suno, Rah Swish, and OnPointLikeOP are out to prove that four heads are better than one. The three Brooklyn bruisers and the boisterous Bronx instigator share SAY DAT, a new EP that showcases their group chemistry. The release showcases the four artists’ complementary, yet distinct styles: DUSTY brings his booming basso; Ron packs punchlines into his triplet flows; Rah is effortlessly cool as he rhymes with his thick NYC accent; OP spits with audible hunger through a coarse rasp, when he isn’t showing off his skill with melody. Comprised of four posse cuts that feature all four rappers plus solo cuts from each emcee, SAY DAT EP is available everywhere via EMPIRE.

Along with the project, the fearsome foursome shares “ANGELS AND DEMONS,” the first video from SAY DAT. The duality represented in the song’s title is apparent in its production, which combines heavenly synths and angelic harmonies with down-n-dirty Jersey club percussion and NYC drill’s signature sliding 808s. “ANGELS AND DEMONS” wastes little time demonstrating the prowess of the four spitters, kicking off with a verse from OP, before Ron Suno kicks up the energy level over the insistent club-style drums, and Rah delivers a fast-paced verse of his own. Batting cleanup is DUSTY LOCANE, who bursts through the track with his room-enveloping bass-heavy voice. With a video directed by Nimi Hendrix, “ANGELS AND DEMONS” is the opening track for Say Dat, setting the tone for the furious project to follow.

“Say Dat” is the first collaborative project by this group, but the close-knit, EMPIRE-signed rappers have worked together frequently in the past. This summer, Ron Suno, Rah Swish, and DUSTY LOCANE united for “SHOES,” a highlight cut from Ron’s recent project SUNO MODE. DUSTY LOCANE and Rah Swish joined forces on “BIG WOOS,” a proud anthem from DUSTY’s late 2021 debut album UNTAMED. OnPointLikeOP connected with DUSTY LOCANE in 2021 for the street hit “MOVE DOLEY” and earlier this year for “Stickup,” which also featured Jim Jones, and teamed up with Rah Swish on the fiery “Always Workin.“

All four rappers spent this year staking their claim as major figures in the NYC rap scene. Ron Suno racked up tens of millions of streams on his hit song “What They All Say” and its Rowdy Rebel-featuring remix, which appeared on his new album SUNO MODE. Rah Swish struck gold with his Soulja Boy-sampling street hit “Tell ‘Em,” while OnPointLikeOP collaborated with the likes of G Herbo, Sheff G, and Sleepy Hallow in recent months. DUSTY LOCANE recently dropped the ROLLIN N CONTROLLIN EP, which collected each installment of DUSTY’s GOLD-certified debut single, “ROLLIN N CONTROLLIN FREESTYLE,” including the recent “ROLLIN N CONTROLLIN Pt. 3 (BEEN ROLLIN)” and it’s TikTok-viral predecessor, as well as his second-ever single, “Rolando (Caught In The Rain)” (92 million Spotify streams), which receives a brand new sequel on the project.

With SAY DAT EP, look for the Five Borough foursome to continue their reign as the hottest rhymers in the Big Apple.