Project: Doley Bernays – The Lobby Tape (Side A)

Produced in Full by Platinum-Selling L.A. Producer Beat Boy, The Lobby Tape (Side A) Details Doley’s Traumatic Past in His Bronx Neighborhood 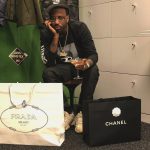 Rhyming with seething intensity and rich attention to detail, Doley Bernays is raw enough to win admirers on both coasts. Digging deep into his past, Doley shares The Lobby Tape (Side A), his latest project. A deeply personal project, The Lobby Tape (Side A) finds Doley at a crossroads–he’s closer than ever to achieving his goal of generational wealth for his family and friends, but he can’t shake the traumatic experiences and tragic losses that shaped him.

Inspired by famously raw street mixtapes like Lil Wayne’s Dedication series and Jeezy’s Can’t Ban The Snowman, The Lobby Tape is a visceral and immediate listen, crafting a cinematic picture of Doley’s life in New York, dotted with contemporary news reports of increased shootings during this pandemic summer. The tape’s title is a reference to the lobby of Doley’s old project, a hotbed of activity and the heartbeat of his hood–a place where all sorts of characters, both friend and foe, would congregate. Doley plays the role of tour guide, passionately relaying his lived experiences in tracks like “The Lobby” and “A Week Straight.” Featuring appearances from 03 Greedo and Maxo Kream, produced in full by Beat Boy (Shoreline Mafia’s “Nun Major”), and mixed by Ron-RonTheProducer, The Lobby Tape is available everywhere via UpAndOn1/Sony/The Orchard.

Buy/Stream The Lobby Tape (Side A): https://orcd.co/thelobbytape

The Lobby Tape (Side A): https://orcd.co/thelobbytape