Chippy Nonstop Sheds Her Party-Starter Reputation To Debut a Softer, More Personal Side With A New Song Produced By Felix Snow That Premiered on VICE’s Noisey 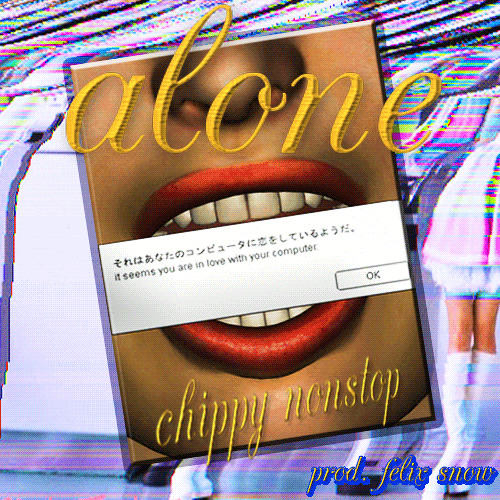 Internet-obsessed Chippy Nonstop is known for a few things: bringing strong party vibes, giving life to new trends, having a bigger personality than the realm itself, and for creating banging party trap songs, but her newest song “Alone” reveals a softer, more tender side she’s never shown before. Produced by Felix Snow, the song opens up with a clap of thunder that forecasts a somber mood but quickly develops into an up-tempo sex-kitten EDM track based on a very personal but highly-relatable topic: people’s overuse of technology to avoid vulnerability and intimacy.

Admits Chippy, “Basically whenever I get really close to someone, I just push them away because I’m scared of getting too close. I use technology as escapism. Even if I feel passionate about certain people that come in and out of my life, I look towards distractions (in this case WiFi) to get away.” Wifi passwords >> sexts.

Los Angeles-based producer Felix Snow, who has produced for notable R&B artists such as SZA, Leona Lewis, and Gallant, assisted Chippy with the beat. Chippy acknowledges that “Alone” is a departure from her usual energetic party music, but explains that there are many different sides to her as a musician. “I love getting ratchet, obviously, being crazy and dancing on tables at parties, but people don’t realize I actually really like songwriting. I’ve been working with pop producers on some other artists’ records and I just love making songs.” The track does not appear on her latest mixtape, #finallyverified, but the project is still available for download on iTunes.

Check out the Noisey premiere and interview with Chippy: http://noisey.vice.com/blog/chippy-nonstop-alone-premiere