Album: Casanova – Behind These Scars

The Roc Nation Rapper Digs Deep Into His Personal Life On His Debut Album, Shares the Cinematic and Moving Clip for Intro Track “Jail Call”, and Announces the Headlining “Behind These Scars Tour”

“Unlike most current New York rappers, Casanova opts to body tracks akin to the days of G-Unit or Dipset, brandishing rapid-fire flows and throaty growls full of malice that are equally as menacing as his 6’4” frame.” – HipHopDX

Rhyming with a gruff intensity and a palpable need to succeed, Brooklyn’s Casanova only speaks facts. Stepping out from behind his tough exterior to reveal his ambitions and vulnerabilities, Casanova shares Behind These Scars, his new album. Comprised of a breathless 10-tracks, Behind These Scars traces Casanova’s path from poverty to prison to prominence, carefully examining every aspect of the rising star’s life. Expanding on the quintessential NYC story started with the Flatbush native’s 2018 project Commissary, Behind These Scars touches on every aspect of Casanova’s life, from soulful reflections on his time in prison like the Complex-premiered “Live,” to confrontational and aggressive bangers like “Knock Knock,” to gritty and resilient tracks like “Stay Wit It.” Featuring appearances from Young Thug, Chris Brown, Jeremih, Gunna, Fabolous, Giggs, and KayCyy Pluto, Behind These Scars releases via Roc Nation, in partnership with Republic Records.

Along with the album, Casanova shares a moving video for “Jail Call,” the album’s introductory track. Atop a beat laden with jazzy piano and sweeping strings, Casanova lays bare the thoughts and feelings that crossed his mind during his lengthy prison sentence: “All this time it can’t be real/Man, I shoulda took a plea deal/The whole system need to rebuild/Sh*t, look what they did to Meek Mill/Plus my bunkie is a junkie/My baby momma told my momma she don’t want me/She told me ‘what she gotta visit for?’/And how I should never bring my child on no visit floor.” Directed by Marc Diamond, the video dramatizes Casanova’s lyrics, focusing on Casanova and the faces of his fellow prisoners, as he emotes in a powerful performance. A fitting intro to the deeply personal Behind These Scars, the XXL-premiered “Jail Call” is an immersive dive into the world of Casanova, giving valuable context to his gripping narratives.

Behind These Scars boasts two successful pre-release singles: “Coming Home” and “So Brooklyn.” Featuring an appearance from Chris Brown, “Coming Home” is a radio-ready, romantic jam with a butter-smooth hook, earning over 1 million Spotify streams in its first two weeks of release. The Fabolous-featuring “So Brooklyn” inspired over 35,000 submissions to the #SoBrooklynChallenge, in which thousands of fans, and several famous faces posted their best bars about what their hometown means to them atop the “So Brooklyn” instrumental. Over the past few weeks, the #SoBrooklyn challenge received entries from the likes of Brooklyn natives like Young M.A., Papoose, Memphis Bleek, Maino, Rob Markman, and game out-of-towners like DMX, G Herbo, Wyclef Jean, Trae Tha Truth, Freeway, Cassidy, Bandhunta Izzy, Houston Rockets guard Iman Shumpert, and Los Angeles Chargers defensive end Melvin Ingram.

Buy/Stream Behind These Scars: https://smarturl.it/BehindTheseScarsCASS

Buy tickets for the “Behind These Scars Tour” (12pm ET): https://officialcasanova.com/ 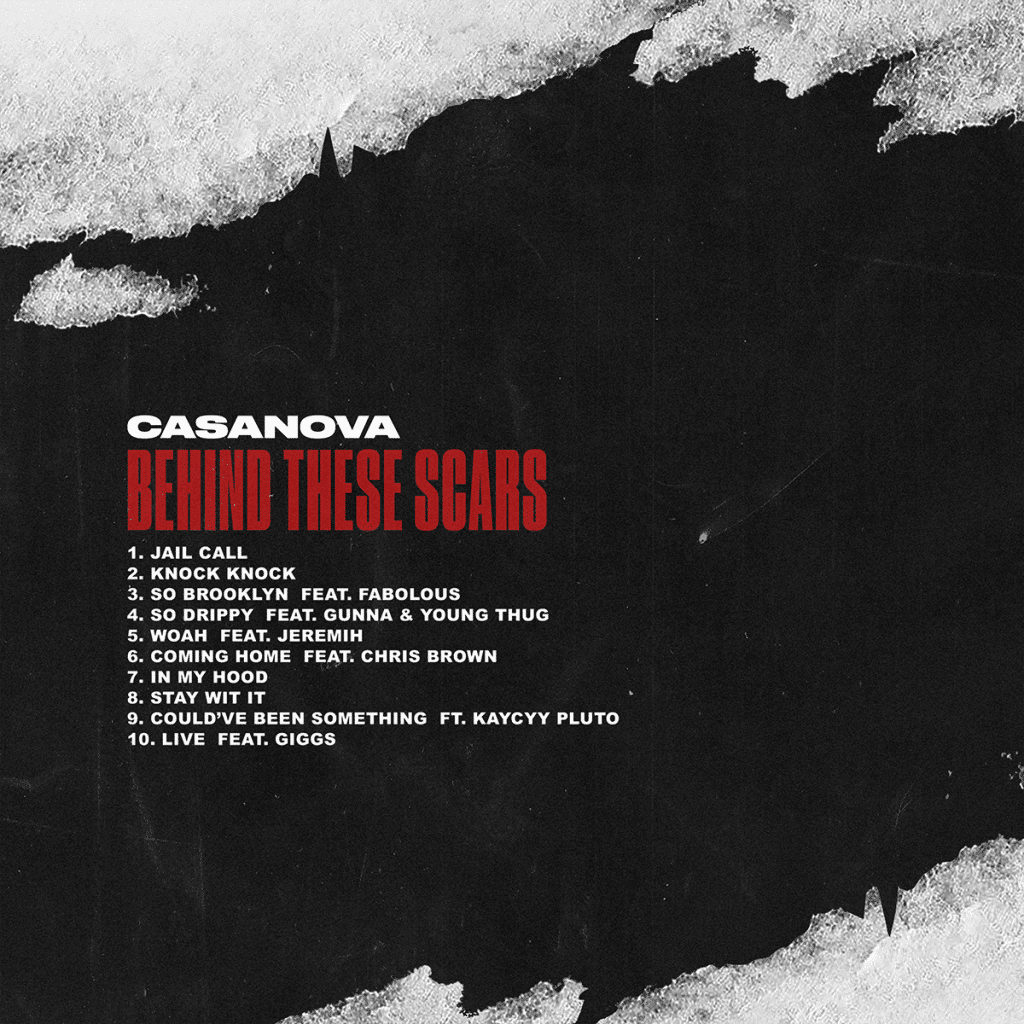 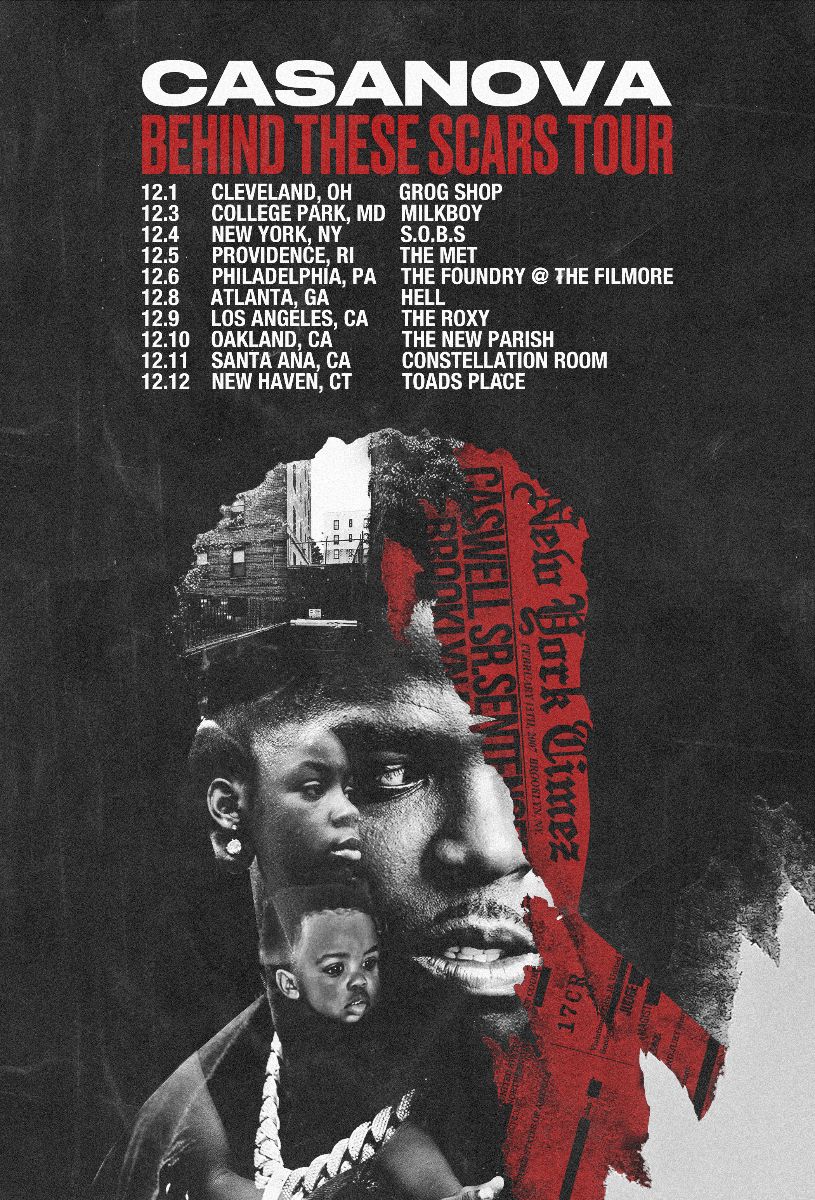 Casanova 2X elbowed his way into rap’s competitive coliseum. Armed with the infectious warning shot “Don’t Run,” the Brooklyn rhyme rookie simultaneously made a name for himself and scored early success at radio and streaming platforms. His robust energy and primal charisma consumed the entire New York City tri-state area, convincing hip-hop heads to adopt his signature salute, “Boom Boom Boom!” Certified by the years he spent incarcerated, Casanova’s debut EP Commissary—featuring guest appearances from Chris Brown, Fabolous, A Boogie wit da Hoodie, and G-Eazy—established him as one of hip-hop’s hottest rising stars. Off parole and ready to see the world, Casanova let his artistry fly first class with the recent release of his aptly titled Free At Last EP, released in 2019. Stay tuned for Behind These Scars, arriving in October 2019.

“Behind These Scars Tour” Tickets: https://officialcasanova.com/