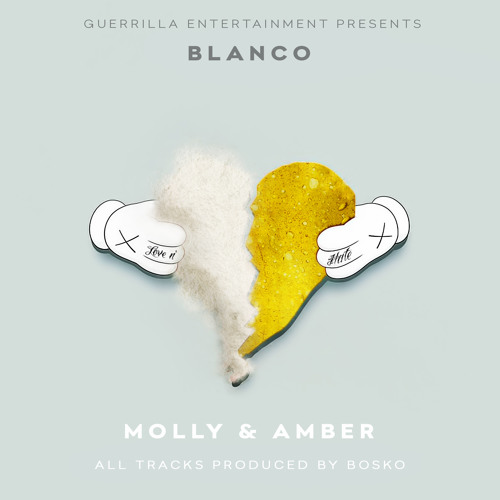 Following feature stories in High Times and HipHopDX documenting a $50 million medical marijuana business that he and his brother started and fought against long-term jail sentences for, California rapper Blanco is preparing for the release of his Molly & Amber EP, which is street slang for MDMA and dabbing. Debuted by YouHeardThatNew, the EP’s title track finds Blanco rapping and harmonizing about his hustling mentality atop a piano-guided production. The project was produced in-full by Grammy-winning producer Bosko, who previously produced songs for E-40, Kanye West, J. Cole, and Big Boi. Additionally the project includes features from frequent collaborators Husalah, Messy Marv, and The Jacka.

“Molly & Amber” is the latest addition to Blanco’s already impressive list of collaborations, which include tracks with YG, Freeway, Gucci Mane, and more. Blanco heated up the summer last year with “Block Party,” a joint effort with YG and producer duo Cookin’ Soul, which was praised by Complex, HotNewHipHop, and Stereogum, among others. Blanco’s extensive catalogue includes a series of music videos as well as projects with The Jacka, Nipsey Hussle, Araab Muzik, and Yukmouth and several solo projects following his 2011 debut, American Psycho. Produced entirely by Bosko, his upcoming Molly & Amber EP is set to drop this July through his self-made label, Guerilla Entertainment. In a recent interview with HipHopDX the Bay area native proclaimed, “I care more about the [music] I put out than I care about the sales. I care more about what I’m attempting to do. It’s about the whole journey.” Blanco’s journey continues next month with the Molly & Amber EP.

One Hunnid EP with The Jacka: https://soundcloud.com/iamguerrilla/sets/one-hunnid-blanco-the-jacka