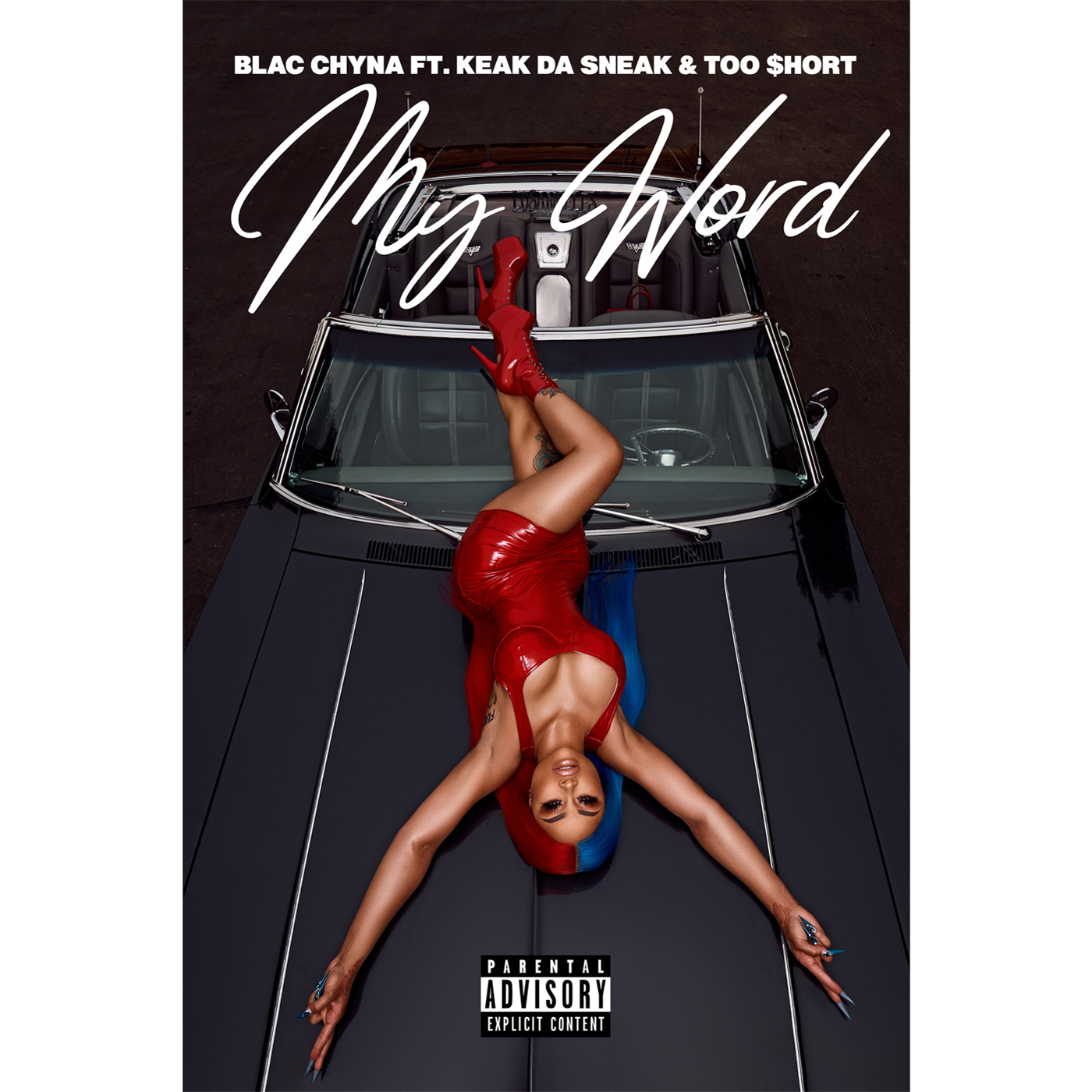 Adding a touch of glamor and attitude to everything she does, Blac Chyna is proving to be a natural in the rap game. Recruiting some Bay Area rap originators to pay tribute to the Hyphy era, Chyna shares “My Word,” her new music video. Rhyming over ping-ponging synths that bring you right back to 2006, Chyna rocks a conversational flow as she promises that she’ll never cap about her finances, or anything else: “I keep a bag in my Birkin, baby/Boss so I’m never not workin’, baby.” The song features guest appearances from Bay Area veterans Too $hort and Keak Da Sneak, the latter praising Chyna with his signature raspy fast-talk, while the former reminds us that pimpin’ still ain’t easy. In the video, directed by Mark Walters/No More Heroes, Chyna, Keak, and $hort Dawg ball out in an L.A. mansion, showing off their cars–namely a cherry red McLaren and an old school boxframe Cadillac–and relaxing by the pool.

“I heard from Chyna that she was doing a Bay Area song,” says Keak Da Sneak. “She called me up and said ‘It’s only right to get you on here.’ Everything she does is on a high level, she’s so professional. She got so many fans of her own. Everybody that love her is automatically gonna f*ck with her music because they already fans!”

“My Word” is Chyna’s third rap single of 2020, following her debut single “Seen Her” (1.2 million YouTube views) and the fast-moving “Cash Only” ft. Trippie Redd (1.3 million views). Floating atop a spritely production from Tito, Justmusic, Derek Diaz, and raisedbywolvvs, Chyna proves a natural emcee on “Cash Only,” using sing-song, auto-tuned flow to prove how she will always prioritize her bag over a man.  The model and self-made entrepreneur recently unveiled a new line of merch inspired by “Cash Only,” offering 16 brand new items, including 4 t-shirts, 3 hoodie designs, and specialty items like underwear, a face mask, a fanny pack, and more. Designed by Chaz Morgan, the designer behind Apparel Reserve known for his work with Meek Mill, French Montana, and many others, the new line of merch is perfectly suited for a chic “at-home” lifestyle.

Born and raised in Washington, DC, Chyna started her career as a dancer in Miami, getting the attention of rappers like Tyga and Drake, before transitioning to a career in modeling. She built up a massive following on Instagram, with over 16 million followers on the platform. A star of numerous reality television shows, including E’s Rob & Chyna and Keeping Up With The Kardashians, The Real Blac Chyna, her show on the Zeus Network, and her own show Only Cams. Chyna is a serial entrepreneur, starting her own clothing line and boutique 88 Fin, establishing “Lashed by Blac Chyna,” a successful brand of adhesive eyelashes, and (pre-COVID) offering makeup tutorials at her own beauty bar in Encino, CA.

Buy/Stream “My Word,” out now via Create Music Group: https://cmg.ffm.to/myword

Angela Renée White (born May 11, 1988), known professionally as Blac Chyna, is an American model, musician, socialite and all around entrepreneur. Originally rising to prominence in 2010 as the stunt double for Nicki Minaj in the music video for the song “Monster” by Kanye West, Chyna gained wider media attention after being name-dropped in the song “Miss Me” by Drake in the same year, leading to a number of magazine appearances, including pieces in Dimepiece, Straight Stuntin and Black Men’s Magazine. In 2014, Chyna launched her own makeup brand, “Lashed by Blac Chyna”, and a beauty salon in Encino, Los Angeles. Chyna has since made a number of media appearances, including in her own reality television shows, Rob & Chyna, The Real Blac Chyna & most recently executive producing her own show “Only Cam’s”.