The Dutch Producer Is One of the Top Users on Music Marketplace BeatStars, Where He Sold the Instrumental That Became “Old Town Road” to Lil Nas X 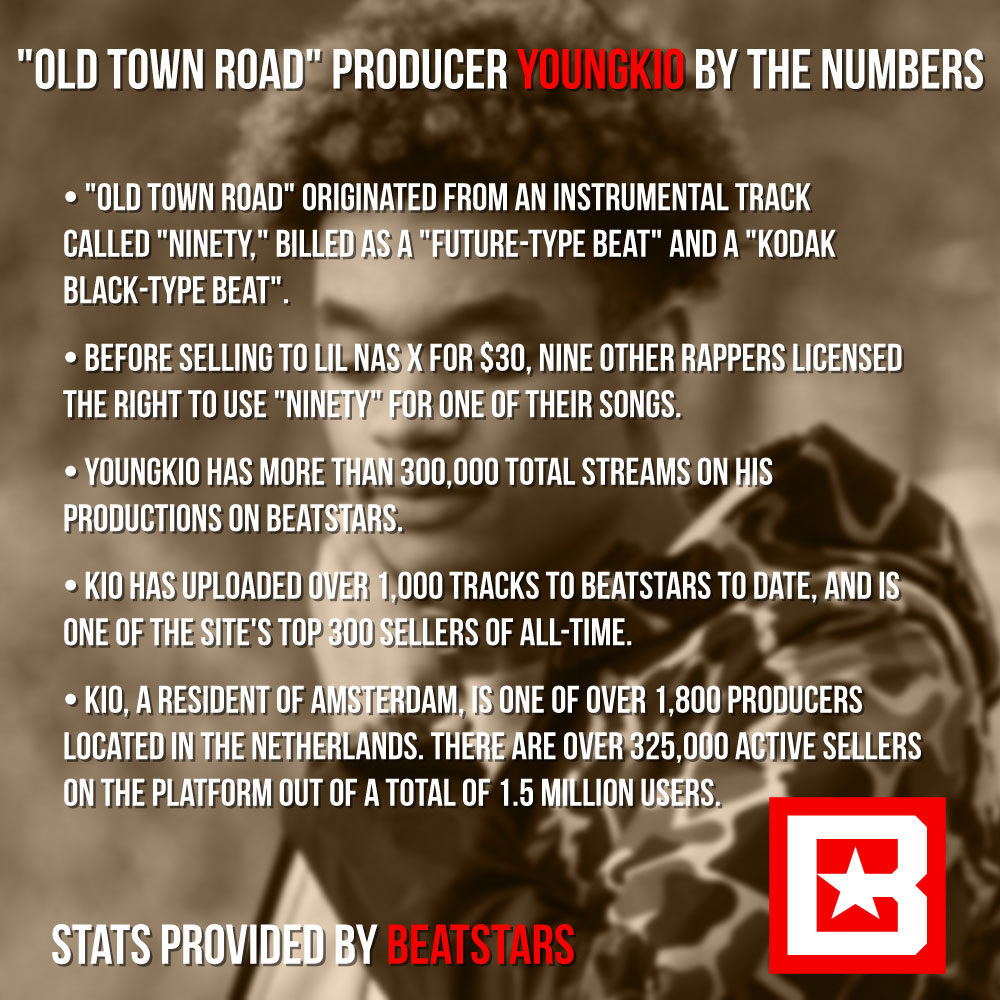 “The music situation improved in October, when Hill stumbled upon the beat for ‘Old Town Road’ while trawling the site BeatStars, which allows aspiring artists to purchase or lease instrumentals. The track was made by Young Kio, a teen in the Netherlands. Kio marked the ‘Old Town Road’ instrumental as a ‘Future type beat,’ and Hill found it intoxicating.” – Rolling Stone

“Lil Nas X, however, says it’s all due to a combination of hard work and knowing how to use the tools of the internet to create something that would click with the masses. ‘Old Town Road,’ after all, started with a track he found on BeatStars, a site launched in 2008 for aspiring musicians to upload their instrumentals, that was created by YoungKio, a fellow teen from the Netherlands. Lil Nas X bought the track for $30 and wrote lyrics inspired by his anxieties over his parents’ disapproval of him dropping out of college.” – Vulture

“So, out of a combination of ingenuity and desperation, [BeatStars founder Abe Batshon] came up with an unprecedented idea. He hit up a producer in a chatroom, asking to use a beat. He offered to pay something, but less than the sale price—under the condition that the producer could still sell the beat to someone else. Thus the concept of a non-exclusive license for a beat was born. Batshon wouldn’t turn his idea into a full-fledged business until 2008, when he started Beatstars, an online marketplace for beats.” – Complex

The Facts:
“Old Town Road,” 2019’s defining number one hit didn’t arise from a songwriting camp, or the office of a major publishing company, or the mind of a Grammy-winning star. Instead, rapper Lil Nas X and producer YoungKio, two teenagers separated by thousands of miles and the Atlantic Ocean, connected on BeatStars, the world’s leading music marketplace. Atlanta rapper Lil Nas X gets the headlines and the TV appearances, but Amsterdam producer YoungKio, a top-selling artist on BeatStars, is an interesting figure in his own right. Below are some quick-hitting facts about YoungKio and BeatStars:

Founded in 2008, BeatStars is the leading global music marketplace connecting over 1.5 million recording artists and music producers, helping them collaborate, network and license beats. Since inception, BeatStars has paid out over $45 million to music producers licensing beats to recording artists on the platform. Founded by Abe Batshon, BeatStars currently has offices in Austin, Texas, Funchal, Portugal and Porto Alegre, Brazil.