Album: BandGang – In Too Deep 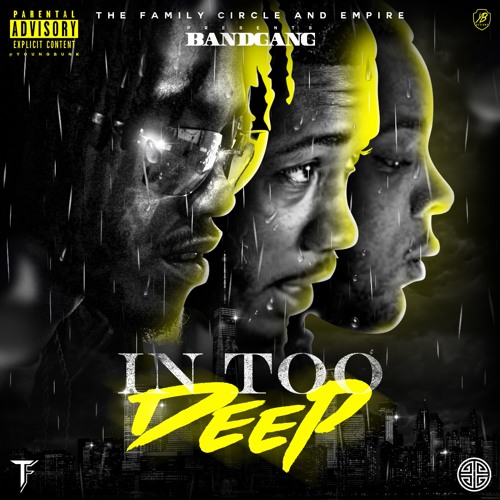 “With short, uneven phrases and a rise-and-fall style that approximates the patterns of speech, [BandGang Lonnie Bands] seems intent on developing a fresh approach that is as mesmerizing as it is unpredictable.” – Complex

“BandGang is on fire in Detroit right now” – XXL

Bringing a fiery, kinetic energy and gritty realism to uptempo instrumentals, the six emcees who make up BandGang helped start a revolution in Detroit hip-hop. The culmination of years of grinding and millions of YouTube views, BandGang showcases the full extent of their talents on In Too Deep, their first studio album. Spanning a ridiculous 30 tracks, but never growing boring, In Too Deep is a treatise on street maximalism and the charismatic power behind the new Detroit sound. Distributed by EMPIRE and premiered by The FADER, In Too Deep is home to several recently released singles, including the BandGang Lonnie Bands star turn “Narcotics 2,” the ferocious, HYPEBEAST-premiered “Ain’t No Problem,” and the bombastically poignant “My N*ggaz.” Featuring appearances from  SOB x RBE, Mozzy, Philthy Rich, Drego, and more, In Too Deep is available to stream on all platforms.

Emerging in the mid-2010s, BandGang (comprised of members Lonnie Bands, Maseo, Javar, Paid Will, AJ, and Biggs) pioneered the distinct style powering the burgeoning Detroit rap scene, marked by flows that fall slightly ahead of the uptempo beat, menacing piano arpeggios, and hard-hitting, reality-based lyrics. Though they have not yet developed the national profile of many of their contemporaries, BandGang’s sound has been a huge influence on rappers like Tee Grizzley, Sada Baby, and FMB DZ. With each member contributing a different flow and vocal style, BandGang has a remarkable hit percentage, earning mentions in Noisey, Complex, XXL, HYPEBEAST, HotNewHipHop, and others. With In Too Deep, BandGang is ready to bust out of Detroit and make a national impact.

To accompany the release of the album, BandGang shares “Right After We Run It Up,” a new video off the project. Dressed to the nines in suits and sunglasses, BandGang pays tribute to Reservoir Dogs in their new video. The video follows the members of BandGang during the aftermath of a jewelry heist, as the crew escapes from the law and holes up in a mansion. The video even features an allusion to the movie’s infamous torture scene. A menacing and rowdy highlight from the album. “Right After We Run It Up” is an ideal sample of In To Deep‘s visceral thrills.

Buy/Stream In Too Deep: https://Empire.lnk.to/Intoodeep

Watch “Right After We Run It Up”: https://www.youtube.com/watch?v=WkR5xeHmYQI

Check out The FADER’s premiere: http://www.thefader.com/2018/08/02/bandgang-in-too-deep-premiere

In Too Deep tracklist:

BandGang Is a group of six rappers, BandGang Lonnie Bands, BandGang Masoe, BandGang Biggs, BandGang PaidWill, BandGang AJ, and BandGang Javar,  based out of Detroit, MI. Each rapper has their own style, delivery, but they all bring a collective of mass appeal. BandGang broke onto the scene in late 2013 with their street hit “BandGang or No Gang”. Since then, BandGang has released several street hits such as, “Out My Business,” “On a Safe,” “Flip work,” and “Outro.” BandGang earned the nickname “YouTube Kings” for their success, having several videos  with over a million views. Bandgang is on their way to making underground history in Detroit’s hip-hop culture.