An Intricate Concept Album About Magical Cannabis and “The University of College,” GEV3 Was Created Over Weeks of Virtual Collaborations With Budding Producers via Twitch and Discord 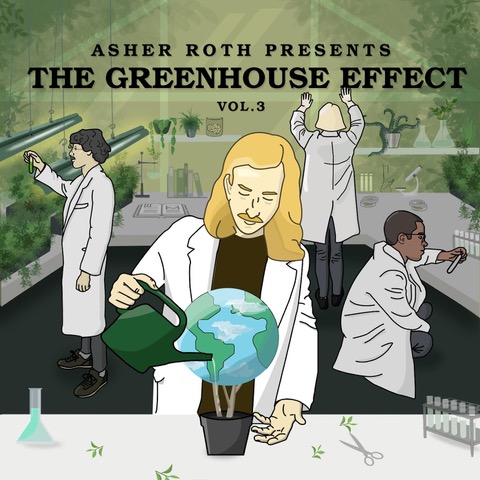 “Like his beloved hometown Sixers, Asher Roth is building for long-term success, no matter how slow, small or uncertain that might be. It’s a process, one that needs to be trusted, as Sam Hinkie would say. But at 32 years old, disillusioned by the road most traveled, newly enriched by a sense of community and charity, and seeing his family grow in the most beautiful way, what matters most in life has never been clearer for Asher Roth.” – DJ Booth

“Residing in North Philadelphia, Roth, 34, has been an integral part of the underground arts community, working in a collaborative effort to create Sunflower Hill, the bunker-like arts space along a corridor of Cecil B. Moore Street that has become a hub for artists, musicians, writers and others to showcase their skills to the community. He’s also been an outspoken critic of the rampant development and subsequent gentri-fication and has strived to use the space as a tool to bridge the divide between residents, old and new” – Philadelphia Weekly

Trading the prospect of fame and fortune for a quiet life lived on his own terms, Asher Roth aims to educate and entertain with his carefully crafted rap music. Sharing a one-of-a-kind new project, a concept album created in collaboration with dozens of producers over the internet, Asher drops The Greenhouse Effect Vol. 3. Continuing a series that started under DJ Drama‘s Gangsta Grillz moniker, Greenhouse Effect Vol. 3 finds the Philadelphia native rediscovering his love for the art of rapping, weaving a complicated “rap opera” storyline around beats sourced from Twitch and Discord.

The story takes place at the “University of College,” where Asher is a professor of horticulture, who uses his expert growing skills to help his students produce a magical strain of cannabis. Professor Roth knows in his heart that his weed can save the world, but he must protect it from being used by those with nefarious motives. GEV3 is playful, and endlessly creative, complete with clever wordplay, vivid storytelling, Philly sports references, allusions to Asher’s previous work, and helpful plant-growing advice. The mixtape features appearances from guests like Tracee Shade, Harbyn, Pow, Marcus Smith, Mickey Factz, and more, who pop in to play various characters in the operatic story.

Asher Roth explains the story behind GEV3 in his own words: “The tape is a rap opera, of sorts, about a professor at the University of College who is teaching horticulture. A few students, looking at his long hair and birkenstocks, assume he can teach them how to grow pot. So he does. Eventually, the Greenhouse gets broken into by a few kids who steal the grow to sell it but ultimately get caught by a police officer–who’s a former student of the Professor’s class who could never learn how to grow. The pot (retrohash) being grown is actually magical and creates a portal to the World of Abundance, but only when smoked by a kind soul. If smoked by a bad apple, the world as we know it would erode.”

The project’s core theme about the triumph of cooperation over greed is reflected by the its unique creative origin. Greenhouse Effect Vol. 3 grew out of a pandemic experiment, created through a fully-virtual collaborative process that lasted months. Every Wednesday, Asher would share acapellas on his Discord, and inspired by his rhymes, fans would create their own instrumentals. Asher would listen to the submissions live on Twitch, and judge his favorites. The 20-week experiment ultimately became GEV3, with 15 songs created by Asher and 12 different producers. Last week, Asher shared three more songs from the GEV3 sessions, entitled the GEV 3-Piece, along with a stylish video for lyrical exercise “Snazzy Kat.”

Though his biggest hit reflected the perspective of a student, Greenhouse Effect Vol. 3 bursts with Asher’s passion for teaching, talent for artist development, love for collaboration, and belief in the importance of self expression. Many of the producers on the project had never placed a song before, and Asher took the time to teach them about royalties and publishing splits. He is determined to help these producers develop careers of their own, and to teach them about the music industry’s mysterious ways. Last weekend, Asher brought many of the album’s producers to his outdoor venue Sunflower Philly for a live listening party, marking the first time he and his producers met in person.

“According to mathematics and astrology, 12 years typically marks the closing of a cycle and the start of a new one,” explains Asher Roth. “That’s where we are right now.” A dozen years ago, Asher Roth was atop the charts and on magazine covers. However, despite the mainstream popularity, the music represented a passing moment in the artist’s life. In the decade since, Asher has bucked the system and taken the scenic route on a creative mission fueled by artistic integrity, songwriting, and expansion. On September 3, Asher revisits his roots with Greenhouse Effect, Volume 3. The former student now becomes the teacher for the trilogy of a respected mixtape franchise. In completing a 12-year-cycle, Asher Roth presents his personal and artistic growth and cultivates and empowers a new crop of talented MCs and producers.

More than a decade after releasing his debut album Asleep In The Bread Aisle, Asher Roth has settled into a creative and productive life as a musician, activist, and entrepreneur. He designs his own merch, and founded RetroHash, his own record label, on which he released his 2020 album Flowers On The Weekend. He’s an outspoken activist in favor of marijuana legalization, and has a plan to enhance music education in his hometown of Philadelphia with special programs and projects. Asher helped found Sunflower Philly, a slice of natural life in the heart of Philly that acts as a community-first venue for art, music, events, and more.