The World’s Biggest Afrobeats Festival Arrives at LoanDepot Park in Miami, FL on May 27 & 28, 2023 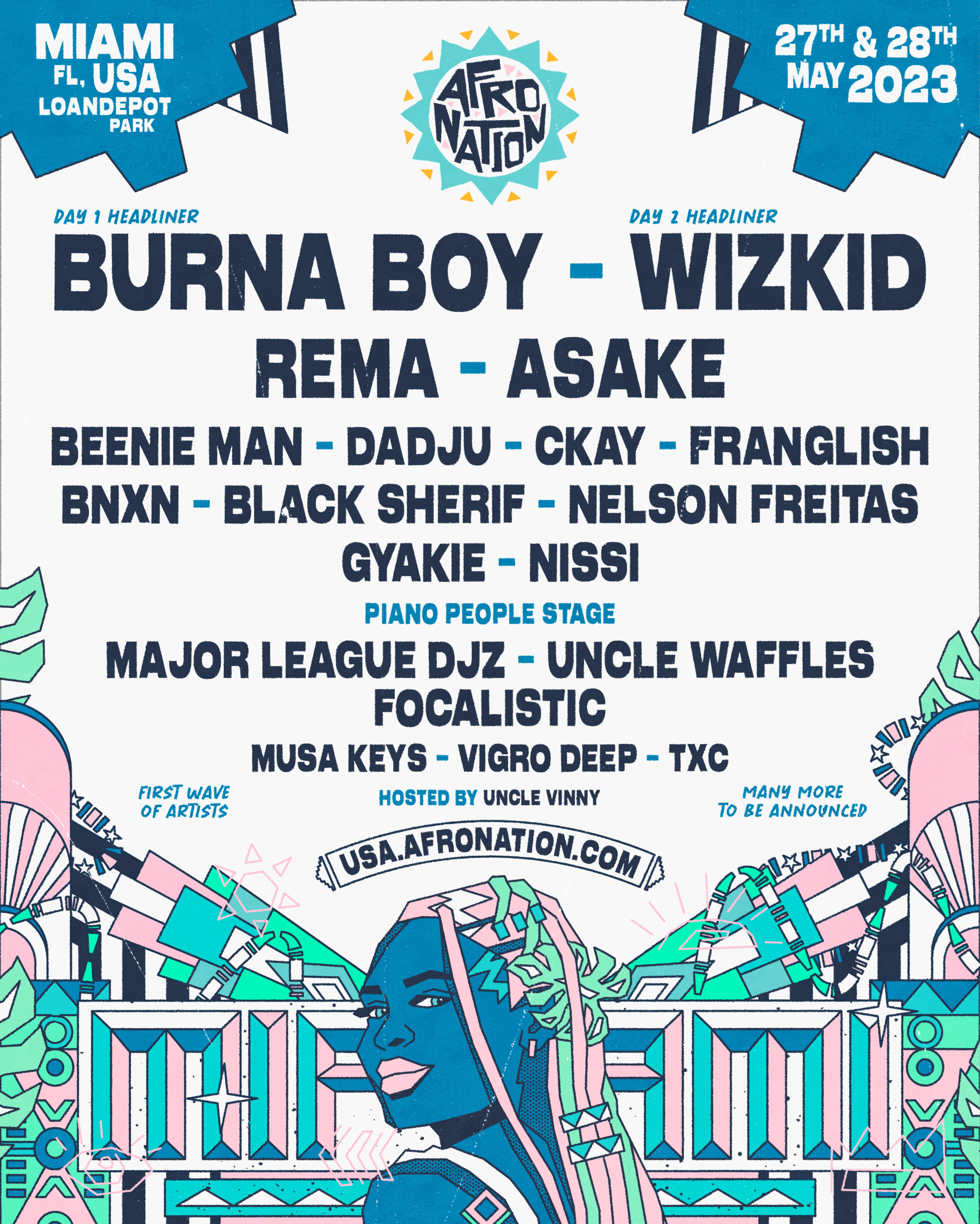 “Afro Nation events began in Portugal in 2019 and are continuing to grow and expand across the globe as a way to showcase and celebrate Afro-fusion, reggae, dancehall, hip-hop, soca and more Black-led music.” – Billboard

“With previous events in Ghana and Puerto Rico, Afro Nation has the accolade of being the world’s biggest festival centered on Afrobeats music.” – Billboard

“The festival promises to deliver an impressive array of today’s hottest artists from Africa and the diaspora.” – Yahoo!

“For the festival goers, this year’s event fulfilled the 2-year long draught of social distancing and zero socializing. Social media was a buzz with Instagram reels featuring artist performances, festival fashion, and social engagements by the beach on the beautiful Praia da Rocha beach, just south of Portimão….Now with a second edition taking place in Ghana, this coming December, Afro Nation is yet to see more success.” – MEFeater

Uniting the diaspora with brilliant music and breathtaking spectacle, Afro Nation is the world’s biggest showcase for one of the fastest growing genres on the planet. Following successful festivals in Africa, Europe, and the Caribbean, Afro Nation takes the next step with Afro Nation Miami 2023, its first festival in the continental USA. Like previous Afro Nation events, the upcoming Miami festival highlights the best in Afrobeats, dancehall, hip-hop, amapiano, and other Black-led musical genres. Headlined by Afrobeats giants Burna Boy and WizKid, and featuring a powerful lineup of artists from Africa, the Caribbean, and across the globe, Afro Nation Miami touches down at LoanDepot Park on May 27 & 28, 2023.

Afro Nation Miami boasts a deep lineup that illustrates the diversity and strength of global Black music. The inaugural Miami festival promises performances from ascendant Nigerian superstars Rema and Asake, dancehall legend Beenie Man, rising African stars CKay, BNXN, and Black Sherif, French rapper Franglish, and many others. Shining a special spotlight on the ascendant genre of amapiano, born in South Africa, Afro Nation Miami brings the Piano People stage, headlined by Major League DJZ and Uncle Waffles, and featuring many more of the genre’s most exciting names. Stay tuned for many more artists to be added to the lineup in the coming months.

The upcoming ANM23 follows up a groundbreaking 2022 from Afro Nation, which has established itself as a major tastemaker and advocate for African music since its founding in 2019. Afro Nation brought a high-powered group of international music stars and over 40,000 fans to the beaches of Portimáo in July for the second-ever Afro Nation Portugal, with headliners that included WizKid, Burna Boy, and Megan Thee Stallion. Earlier in the year, the innovative festival made its North American debut with Afro Nation Puerto Rico. The festival closed out 2022 with Afro Nation Ghana 2022 in Accra, Afro Nation’s first event in Ghana since 2019.

Afro Nation festivals are dedicated to providing a global platform for music from Africa and its diaspora. In addition, Afro Nation teams with BBC Radio 1xtra and the Official Charts Company to host a weekly UK Afrobeats Chart Show, and in 2022, Afro Nation partnered with Billboard to present the first-ever U.S. Afrobeats Chart.

With more milestones to cross and many unforgettable sets in the near future, Afro Nation is primed to shine an even brighter spotlight on some of the most exciting artists in music today.

Visit https://usa.afronation.com/ to buy tickets and view full information about the festival. 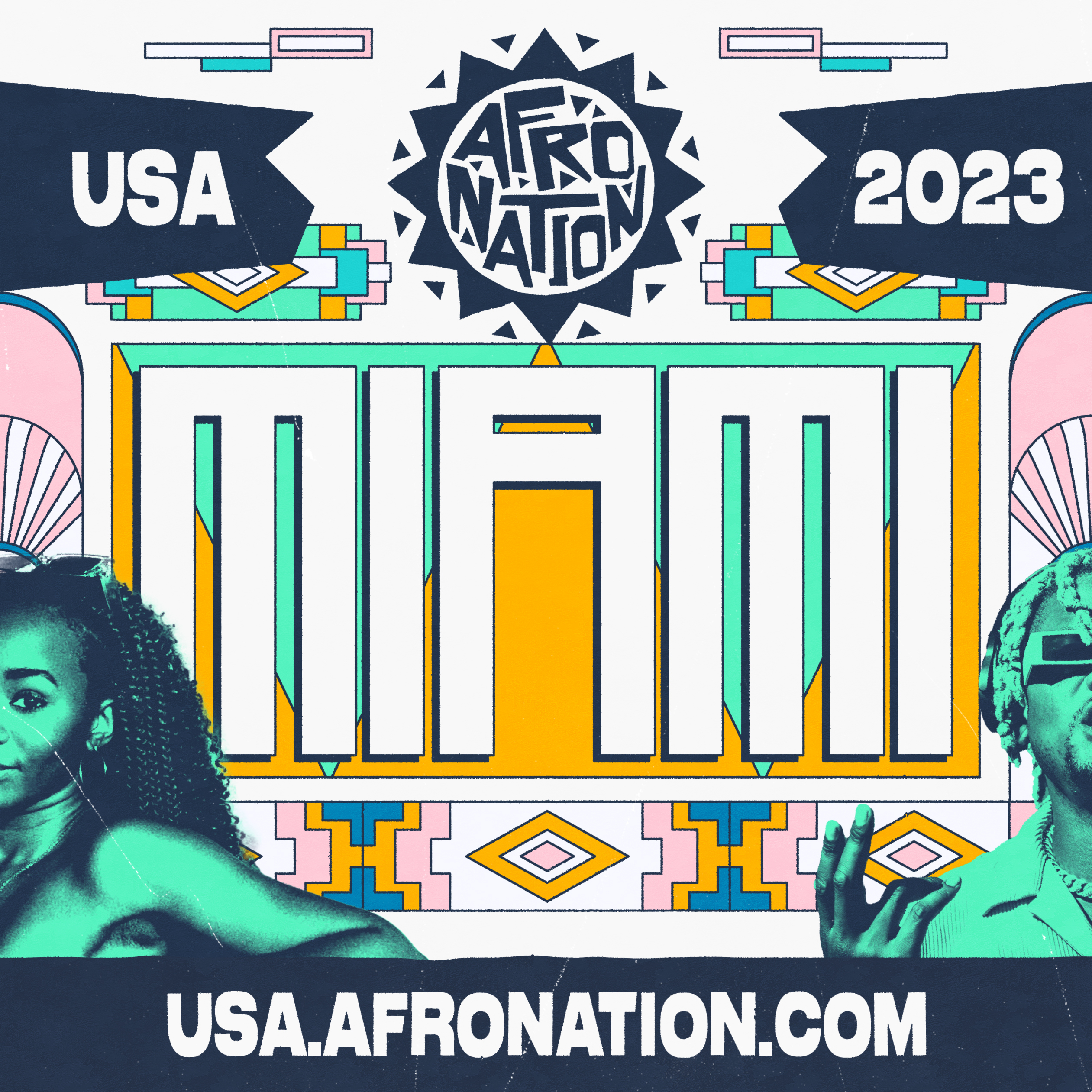 Launched in 2019 to critical acclaim, Afro Nation is the biggest and best Afrobeats celebration in the world and a fast growing global cultural influence. The events unite the diaspora and deliver something culturally important to a hugely underserved audience. In 2022, 40,000 music lovers attended Afro Nation Portugal to see the biggest names in Afrobeats, Amapiano, Hip-Hop, R&B, Dancehall and Bashment, at one of the most beautiful beach locations on the planet. After finishing 2022 with Afro Nation Ghana (Dec. 29-30), Afro Nation expands even further in 2023, with Miami 2023, its first-ever festival on the continental U.S.