The ultimate love letter to the world’s most magical plant: Weed. Bestselling author, rapper, chef, and television star Action Bronson is a marijuana superhero, and Stoned Beyond Belief (Abrams Image; March 19, 2019; U.S. $27.50; Hardcover), is his masterpiece.

This is an exploration of every corner of the pot galaxy, from highly scientific botanical analyses and the study of pot’s medicinal benefits to a guide to the wild world of weed paraphernalia. It’s also a very personal tribute to a substance Bronson refers to as life-changing, horizon-expanding, a conduit for happiness, a connector. Weed is to Action Bronson what the madeleine was to Proust: the door to true consciousness.

Organized loosely into 100 entries, including 35 recipes, and packed with illustrations and photos, Stoned Beyond Belief is a trippy and munchie-filled experience, as well as an entertainingly valuable resource for weed enthusiasts and scholars. Written with assistance from Rachel Wharton, Stoned Beyond Belief will delight Action Bronson fans and pot aficionados all across the universe.

A multi-talented figure with expertise in all creative arts, Action Bronson is an enthusiastic and tireless worker. In November 2018, Bronson released White Bronco, his latest studio album and his first project as an independent artist since 2012. The follow-up to 2017’s Blue Chips 7000, White Bronco features production from Bronson’s longtime collaborator Party Supplies, as well as contributions from Knxwledge, Harry Fraud, Daringer, Samiyam and Bronson’s live band The Special Victims’ Unit. With a surreal front cover painted by the Queens-born icon himself, White Bronco showcases a liberated Action Bronson, free from constraints or distractions. Featuring appearances from A$AP Rocky, Meyhem Lauren, Yung Mehico, and Big Body Bes, White Bronco is available now on all DSPs via EMPIRE.

Enjoy two excerpts from Stoned Beyond Belief, courtesy of Abrams Publishing:
Excerpt #1 – “Someone Else’s Weed”
Excerpt #2 – “How To Hide Weed”

Excerpt #1 -“Someone Else’s Weed” (click image to view in full): 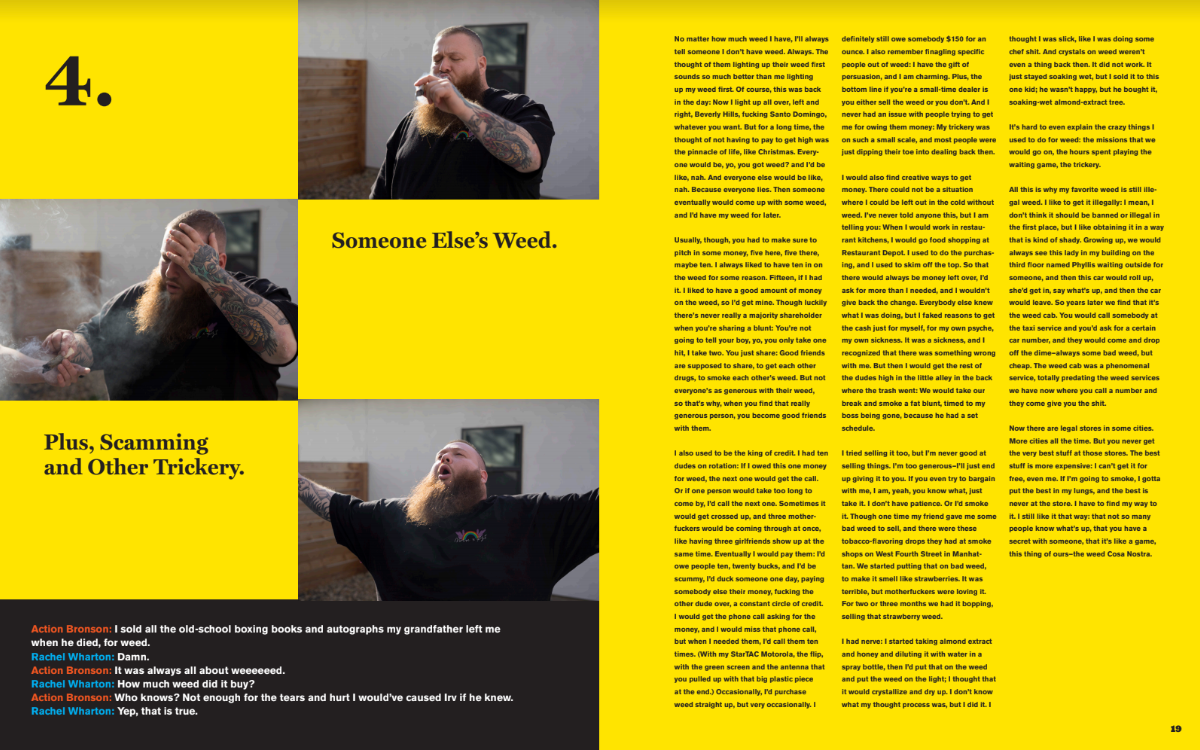 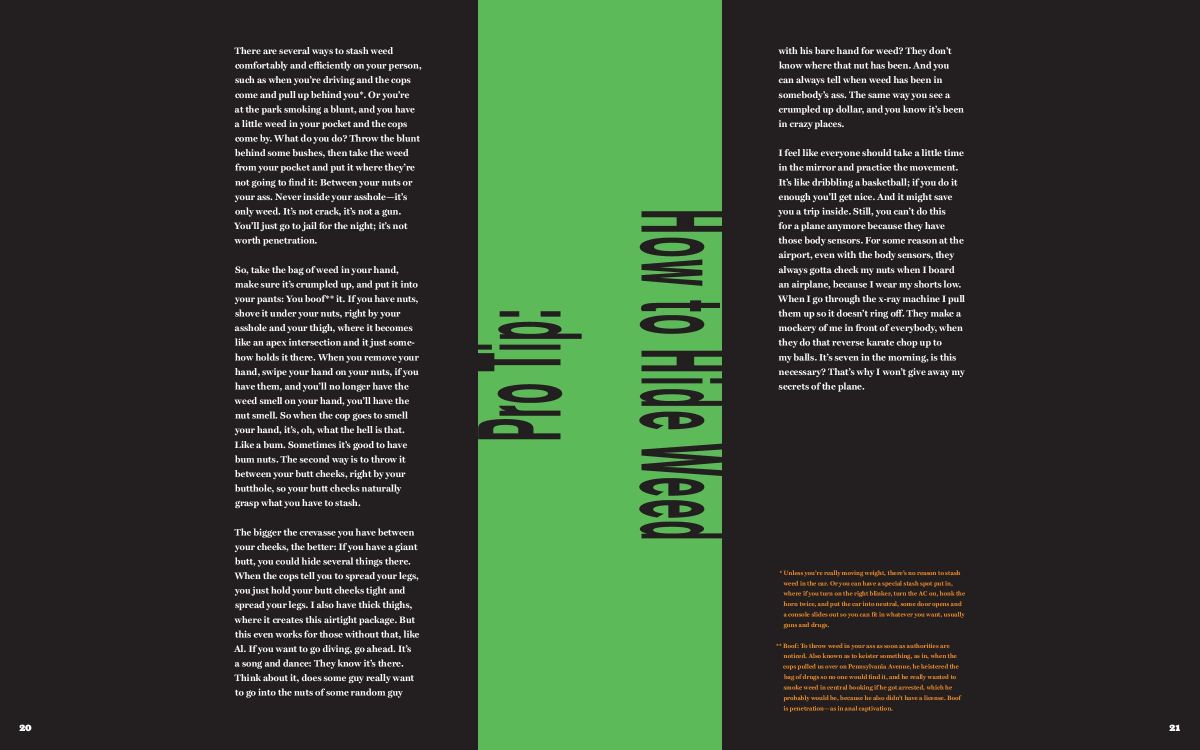 With a constant slate of tour dates and TV appearances, and a busy schedule of recording, writing, and even painting, Action Bronson just might be the hardest-working man in show business. This week, Bronson embarks on a promotional blitz to get the word out about Stoned Beyond Belief, including appearances on this morning’s Good Morning America on ABC and tonight’s Late Night With Seth Myers on NBC. Bronson will also appear in person at release events in Manhattan and Long Island. See below for event details.

At this event, Action Bronson will sign copies of his latest Abrams release “Stoned Beyond Belief.” With each $50 purchase of the book, guests will also receive the “1,000 Pound Gorilla” specialty ice cream sandwich (While supplies last). The “1,000 Pound Gorilla” ice cream sandwich is a collaboration between Action Bronson and Nick Morgenstern of Morgenstern’s Finest Ice Cream and made of: banana pudding ice cream, vanilla wafers, banana dip, and caramel crunch.

Join us for an evening with Rapper and New York Times Bestselling author of F*ck, That’s Delicious, Action Bronson as signs his new book, Stoned Beyond Belief.

IMPORTANT! All books signed at Book Revue events should be purchased at Book Revue. If you purchase the book prior to the event please save your Book Revue receipt. If you have purchased the book from somewhere else you can still get your book signed, we just ask that you make a purchase in our store of equal or greater value to that of the book.

In November 2018, Bronson released White Bronco, his latest studio album and his first project as an independent artist since 2012. Featuring appearances from A$AP Rocky, Meyhem Lauren, Yung Mehico, and Big Body Bes, and production from Party Supplies, Harry Fraud, Daringer, Samiyam, and and Bronson’s live band, The Special Victims’ Unit, White Bronco is available now on all DSPs via EMPIRE.