Unaltered From His Original Vision, the Upcoming Album Continues the Late Rapper’s Mission to Spread Positivity Amidst Darkness 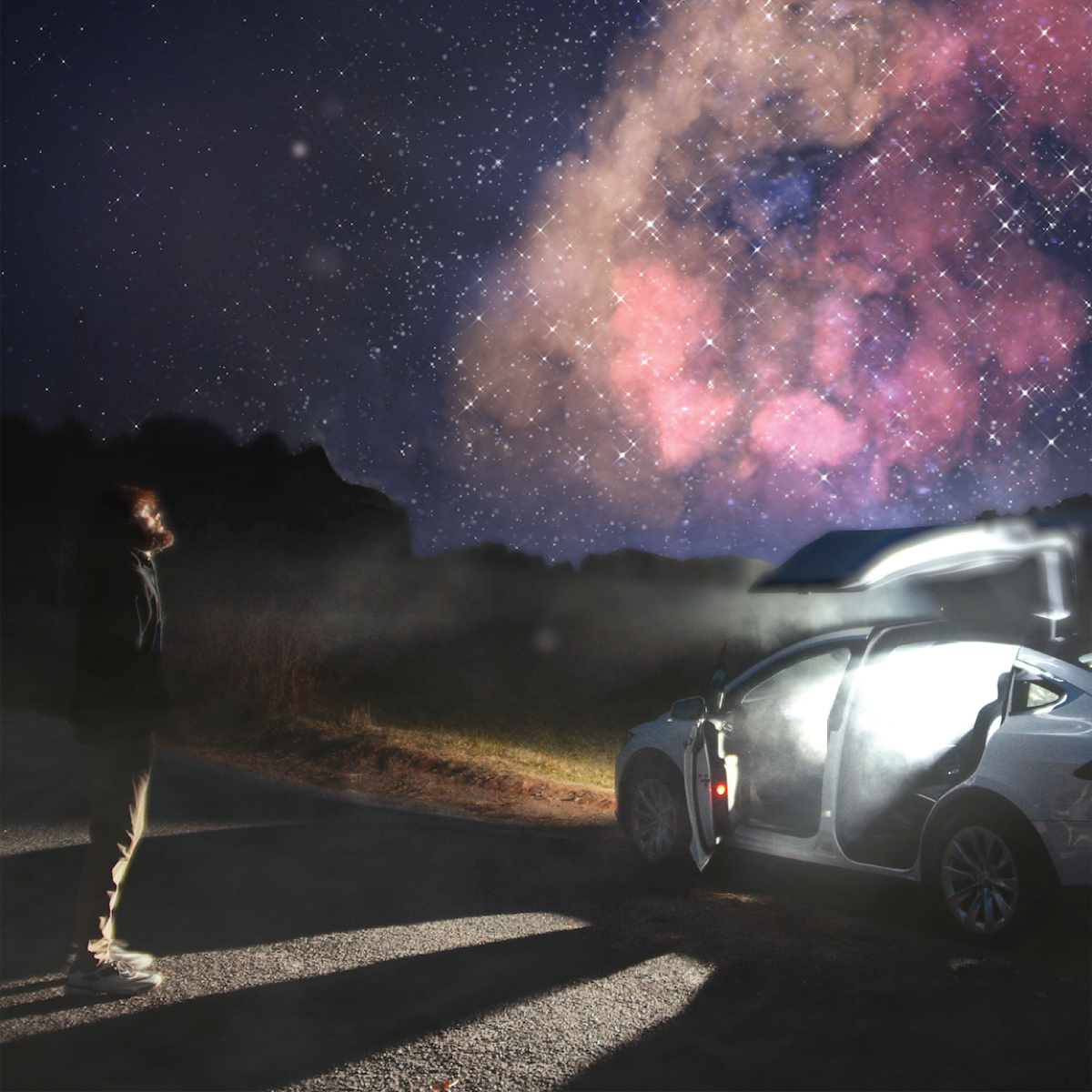 Ronald Chase Amick, the performer known as 6 Dogs, tragically passed away in January, leaving behind a deep catalog of uniquely personal, nostalgic, and uplifting songs and a finished album, originally scheduled to be released today, February 26th. The album originally had the title Wavebuilder’s Club, but shortly before he passed, the artist chose to change the name of the project to RONALD, signifying a new beginning for the young singer-rapper. Recorded and distributed completely independently (Chase owned his own masters), the album matches Chase’s original vision to a tee, and it remains unaltered since he finished the album and turned it into DSPs in January.

Created in collaboration with executive producer and engineer Daniel Hartzog, RONALD transports Chase’s lilting melodies into a sparkling, atmospheric sonic realm. Almost entirely free from explicit lyrics, RONALD was created with the masses in mind. Chase hoped that the album would help his fans confront their demons with positivity–to embrace their feelings, instead of succumbing to them, and to come out the other side happier. The album benefits from Chase’s innate instincts for hooks and his lyricism, which is alternately playful and profound. Featuring guest appearances from close friends Riz La Vie and Tahj Keeton, RONALD arrives on March 12th.

Today, the family shares “Starfire (Teen Titans),” the first glimpse of the upcoming album. Named after the eponymous character from the Cartoon Network show Teen Titans, who could translate sun and starlight into pure energy, “Starfire” is a perfect metaphor for 6 Dogs’ creative process, where he would draw energy from everyday life and figure out how to apply the lessons learned and emotions felt to his art. Combining astral synth squiggles with ringing guitars and thumping 808s, “Starfire” is an excellent showcase of 6 Dogs’ skill with conversational melody, as he reflects on how his flossy lifestyle doesn’t make him less lonely: “Creeping on the freeway all black Escalade/I was on the road now I’m all alone/Looking at space means I’m all alone/Tears all on my phone.”

A monument to the artist’s influence and singular point-of-view, the forthcoming RONALD album doesn’t wallow in tragedy or despair, but lights a path forward for those dealing with internal strife. Stay tuned for more music and information.

A Statement From Chase’s Family & Team: 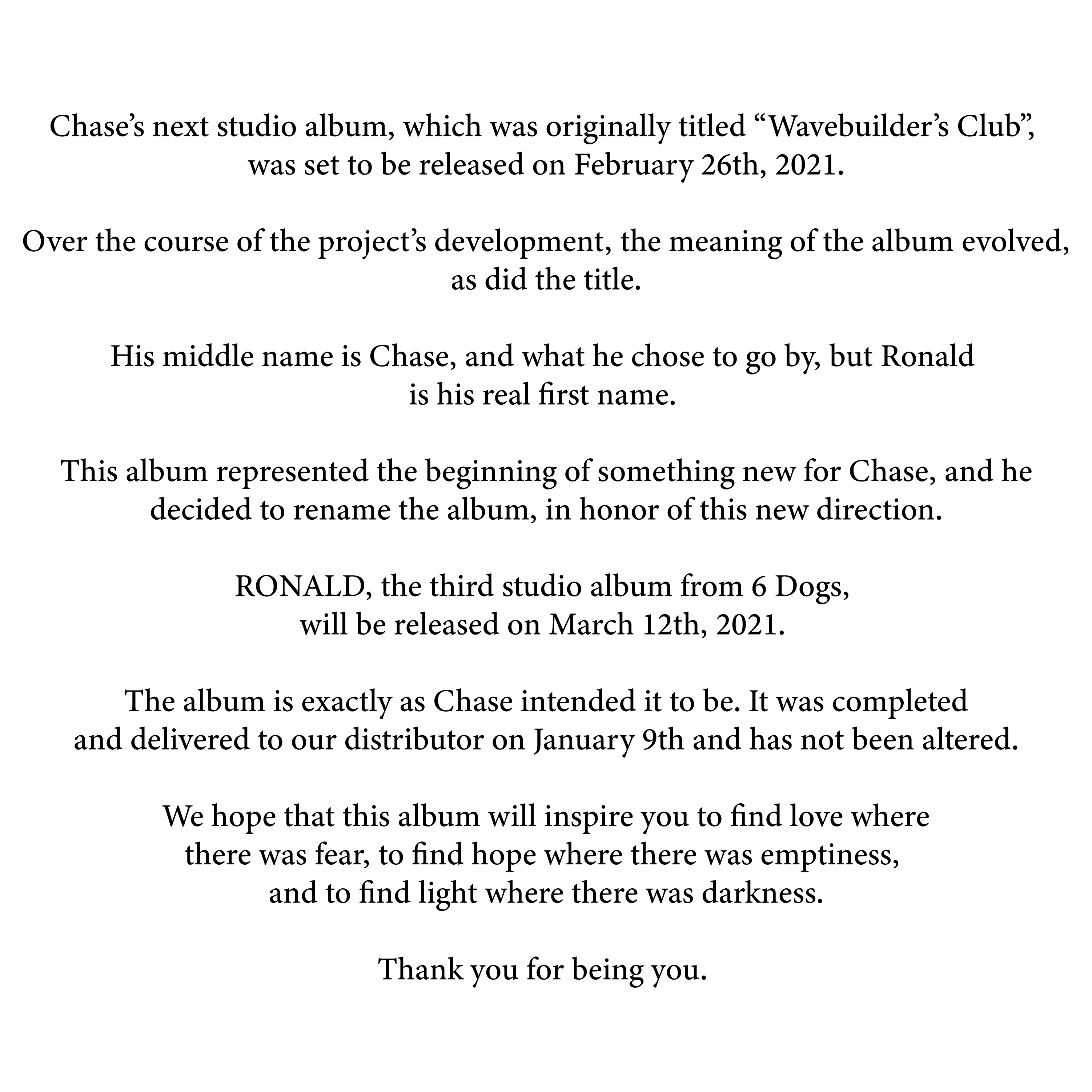 His upcoming independent album is entitled RONALD, which is his real first name. He went by his middle name, and his friends and his fans knew him as Chase. Chase specifically designed the album to be a comeback project representing a new direction, rebirth, evolution, and hope for a bright future, while showing the world he was just getting started. Executive produced by Daniel Hartzog at the Airwaves Atlanta studio in Atlanta, the project is meant to, in his words, let people feel their sadness, sit with it, and then embrace happiness and the inherent beauty of life. Triumphantly sober for many years, 6 Dogs proudly created the album to be widely accessible and to provide the best positive vibes possible, which is why the album’s lyrics are clean, sans for one gust verse on one song. He worked with his team for close to 7 months, going through a name change (originally titled Wavebuilder’s Club) and myriad iterations of the tracklist, before settling on the final form of the album which he delivered for distribution before his passing.. The album is, in its entirety, unaltered from Chase’s original vision.