Q: Are We Not Men? A: We Are Emojis!
Devo and Emoji Fame Connect For a New Emoji Set After over 40 years, Devo‘s brand of deadpan surrealist humor and sardonic social commentary has birthed a new method of delivery. Devo now has custom emojis available via Emoji Fame, the go-to company specializing in making emoji sets for musicians. From their chilling, miles-ahead debut to the instantly-recognizable smash hit “Whip It,” Devo has been that household name whose influence you may have overlooked, despite their massive influence on alternative music and appearances in the posters of teenage walls in Fast Times at Ridgemont High and Revenge of the Nerds.

“The DEVO emojis are the most unique set we’ve worked on. While some of the imagery is similar to current emoji culture, the bulk of it taps the iconoclastic imagery the band is known for. We’re certain that fans will have an uncontrollable urge to use them,” said Gavin Rhodes, co-founder of Emoji Fame.

The set, a joint development between Emoji Fame and Devo, is a palette of the legendary band’s trademark dissidence, featuring lyrics and mantras, the irreverent Booji Boy, and their signature Energy Domes, said to increase one’s sexual prowess; there are appropriated 1950s mail-order clippings; there’s iconic imagery such as the New Traditionalists astronaut; a saluting DEVOtee in the signature yelow jumpsuit, and animated, cracking whips for when you feel the need to “Whip It Good.” No matter what your flavor, with the Devo emoji set, there are numerous ways to display your DEVOtion.

The emoji set is available now at devo.emojifame.com 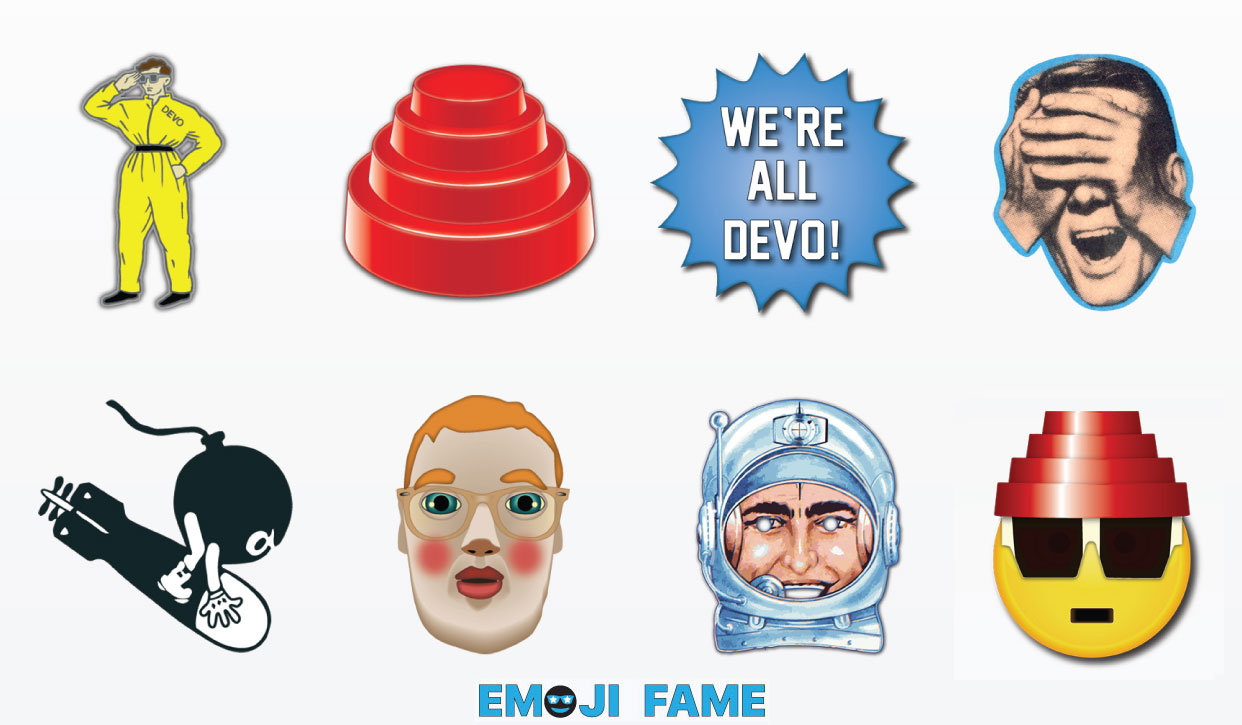 We have a limited number of free coupon codes available for the set. If you’d like one, please contact Michelle, Gavin or Dharmic for more info.

Emoji Fame makes custom emojis from your favorite musicians, celebrities and brands. Emoji Fame has been featured in Complex, Billboard, Noisey, Guitar Player, The Albuquerque Journal, The Houston Chronicle, SF Weekly, and Bill Simmon’s The Ringer. Unlike other apps, Emoji Fame’s are officially licensed by the artists, which means fans’ in-app purchases help them continue making the art that you love.